NewsBusters Year-in-Review: The Most Outrageous Quotes of 2017 Part V 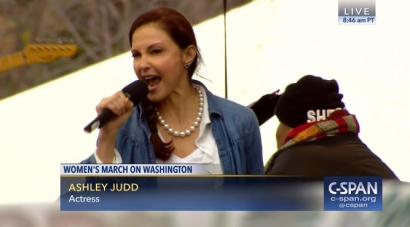 All this week, NewsBusters is recounting the most obnoxious liberal bias of 2017. Monday, we presented the most outrageous examples of journalists fawning over liberal or left-wing icons; on Tuesday, we showcased some of this year’s nastiest attacks on Republicans or conservatives; Wednesday, we highlighted the media’s freak-out over President Donald Trump; and yesterday was a look at the stupidest quotes of the year.

Today, we finish the series with some of the most outlandish celebrity quotes of 2017. At the Women’s March in January, actress and self-described “nasty woman” Ashley Judd yelled that she felt “Hitler in these streets,” while Madonna admitted: “I have thought an awful lot about blowing up the White House.” Actor Johnny Depp also had violent daydreams, as he openly wondered “When was the last time an actor assassinated a president?”

“I am a nasty woman. I am not as nasty as a man who looks like he bathes in Cheeto dust, who’s words are a death trap to America, Electoral College-sanctioned hate speech contaminating this National Anthem....I am not as nasty as a swastika painted on a pride flag and I didn’t know devils could be resurrected, but I feel Hitler in these streets. A mustache traded for a toupee. Nazis renamed as the cabinet....I am not as nasty as your own daughter being your favorite sex symbol, like your wet dreams infused with your own genes but, yeah, I’m a nasty woman. A loud, vulgar proud woman. I’m not nasty like the combo of Trump and Pence being served up to me in my voting booth.”
— Actress Ashley Judd at the Women’s March as aired on C-SPAN, January 21.

“Welcome to the revolution of love! To the rebellion, to our refusal as women to accept this new age of tyranny. Where not just women are in danger, but all marginalized people, where being uniquely different right now might truly be considered a crime. It took this horrific moment of darkness to wake us the fuck up. It seems as though we had all slipped into a false sense of comfort, that justice would prevail and that good would win in the end. Well, good did not win this election....Yes, I am angry. Yes, I am outraged. Yes, I have thought an awful lot about blowing up the White House. But I know that this won’t change anything.”
— Singer Madonna at the Women’s March as aired on C-SPAN, January 21.

Depp Dreams About Being a Modern Day John Wilkes Booth

“Can we bring Trump here?...I think he needs help...When was the last time an actor assassinated a president?”
— Actor Johnny Depp at Glastonbury Festival in England on June 22.

“It has taken me a full year to integrate the reality of him being a president in a way that I don’t come across as either so full of rage that no one can hear my words, or so sad that I can’t articulate the level of pain....I seriously worry whether I personally will be able to live through [Trump presidency] and whether the nation will be able to live through it and survive. It’s a terrifying concept, on the brink of nuclear war with a madman in charge.”
— Comedian/actress Rosie O’Donnell in October 24 interview for W magazine.

“The first time I heard of [Donald] Trump legitimately running for president, the first thing I thought of was fascism. I was just thinking of all the buildings he’s got his name on. That type of narcissism – wow, that’s not that much different from Saddam Hussein. He’s batshit crazy. This isn’t just a Republican that you’re dealing with. He’s no longer the leader of the free world. I’ve never seen a president that was no longer that....[My sons] look at it and they’re like, ‘We have Satan as the President of the United States.’ And I was like, ‘We’ve had Satan before, and we voted Satan out. Just remember that.”
— Green Day frontman Billie Joe Armstrong at liberal filmmaker Michael Moore’s Broadway show, as reported in September 21 RollingStone.com article.

“Mr. Trump, your presidency, I love your presidency. I call it, it ‘Disgrace the Nation.’ You are not the POTUS, you’re the BLOTUS (Biggest Liar of the United States), you are the glutton with the button. You are a regular ‘Gorge Washington.’ You are the Presi-dunce, but are turning into a real prick-tator. Sir, you attract more skinheads than free Rogaine. You have more people marching against you than cancer. You talk like a sign language gorilla who got hit in the head. In fact the only thing your mouth is good for is being Vladimir Putin’s c**k [bleep] holster.”
— Host Stephen Colbert on CBS’s The Late Show, May 1.

Trump is the “Logical End” of Reagan’s Racist Revolution”

“You kind of have to overlook the fact that Trump isn’t a virus from space. He came from the Republican Party, he’s the kind of logical end of the Reagan revolution. He’s not an anomaly, he’s not an aberration. It started long ago. All the things that are in Trumpism were there: The racial dog whistles, the anti-intellectualism, the anti-science. He’s just the end of the road for that. And so when I hear the anti-Trumpers, I applaud, but at the same time I go ‘yeah, but there’s something in there that we’re not really saying.’”
— Host Bill Maher on HBO’s Real Time, September 22.

“Mike Pence is a loathsome swine who has every intention of stripping basic rights from most of the country. And he’s blithely complicit in abetting Bannon’s deliberate dissolution of our democracy. Would I prefer he were president instead of the quivering, Tang-sweating, praise-eating, Putin-smooching, laser-pointer-chasing man-brat we have now? Yes. Pence is unethical, but he’s quantifiable. He’s opposable, like a thumb.”
— Filmmaker Joss Whedon in an e-mail sent to Buzzfeed for a March 8 article on Mike Pence.

Republicans and NRA Members At Fault for Mass Shootings

“Innocent people go to church on Sunday to honor their God, and while doing so, get shot in killed. What country? America. Why? Republicans.”
— November 5 tweet after Texas church shooting by Netflix host Chelsea Handler.

“Another part of the problem is that Repub Party doesn’t view mentally ill heavily armed white guys as dangerous, they view them as voters.”
— November 5 tweet by director Adam McKay.

“Welcome to America. It has been zero days since our last mass shooting. #FucktheNRA”...
“The murdered victims were in a church. If prayers did anything, they’d still be alive, you [House Speaker Paul Ryan] worthless sack of shit.”...
— November 5 tweets by actor Wil Wheaton.

“It’s the same flag that flew over slavery and the genocide of the Native American population, the napalming of the Vietnamese children, the destruction of Afghanistan’s civilian hospitals and it’s on the uniform of every police officer who’s killed an innocent African-American person. It’s also a flag that’s in the courtroom of every judge who’s let those cops go free.”
— Musician Tom Morello on HBO’s Real Time with Bill Maher, September 29.