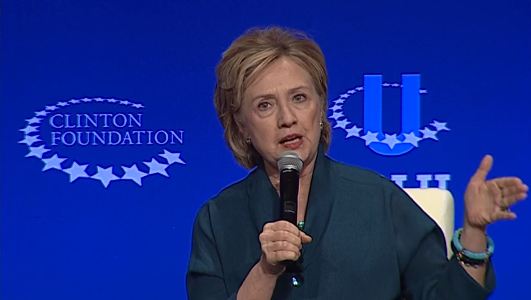 The Clinton Foundation has been labeled a “charity fraud” by the same Wall Street analyst that
was an “early whistleblower on financial irregularities at companies such as General Electric and AIG.”

On Thursday, The Washington Free Beacon reported that Charles Ortel “spent the past 15 months digging into the Clinton Foundation’s public records, federal and state-level tax filings, and donor disclosures” and determined “this is a charity fraud.”

So far, none of the Big Three (ABC, CBS, NBC) networks have reported on this latest development in the scandals swirling around The Clinton Foundation.

On May 5, The Washington Free Beacon’s Alana Goodman reported the following:

The Wall Street analyst who uncovered financial discrepancies at General Electric before its stock crashed in 2008 claims the Bill, Hillary, and Chelsea Clinton Foundation has a number of irregularities in its tax records and could be violating state laws.

Charles Ortel, a longtime financial adviser, said he has spent the past 15 months digging into the Clinton Foundation’s public records, federal and state-level tax filings, and donor disclosures. That includes records from the foundation’s many offshoots—including the Clinton Health Access Initiative and the Clinton Global Initiative—as well as its foreign subsidiaries.

According to Ortel’s reports, the contribution disclosures from the Clinton Foundation don’t match up with individual donors’ records. He also argued that the foundation is not in compliance with some state laws regarding fundraising registration, disclosure requirements, and auditing rules.

This week, Ortel is starting to release his findings in the first of a series of up to 40 planned reports on his website. His allegation: “this is a charity fraud.”

“Starting almost 20 years ago in 1997, the Clinton Foundation spread its activities from Little Rock, Arkansas, to all U.S. states and to numerous foreign countries without taking legally required steps to function and solicit as a duly constituted public charity,” wrote Ortel, in a letter posted on his website.

Although Ortel has been a commentator for conservative outlets, his findings might not be easy for authorities to ignore. After spending decades working in mergers and acquisitions at some of Wall Street’s top firms, he has been an early whistleblower on financial irregularities at companies such as General Electric and AIG.

The Sunday Times of London described Ortel as “one of the finest analysts of financial statements on the planet” in a 2009 story detailing the troubles at AIG.
...
Ortel turned his attention to the Clinton Foundation in February 2015. To learn more about the charity, he decided to take it apart and see how it worked.

“I decided, as I did with GE, let’s pick one that’s complicated,” said Ortel. “The Clinton Foundation is complicated, but it’s really very small compared to GE.”

When Ortel tried to match up the Clinton Foundation’s tax filings with the disclosure reports from its major donors, he said he started to find problems.

Last year, the Clinton Foundation was forced to issue corrected tax filings for several years to correct donation errors. But Ortel said many of the discrepancies remain.

Ortel said his reports in the coming months would also provide evidence that the foundation is not complying with state laws on fundraising, financial disclosure, and audits.

Ortel said he hoped the reports would encourage investigative journalists to follow up on his findings.