Ripping Rubio: The Media’s Worst Attacks on the Florida Senator 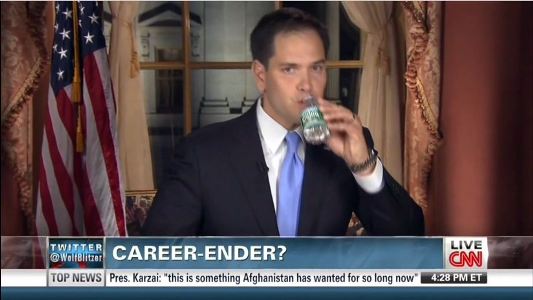 Not long after he arrived on the national scene in 2010 Republican Senator and forthcoming presidential candidate Marco Rubio was exploited by the liberal media as a way to depict Republicans as anti-immigrant. Anchors like ABC’s George Stephanopoulos and Charlie Rose portrayed him as a token Latino in the GOP. MSNBC’s Donny Deutsch actually hurled a racial slur against Rubio, calling him a “coconut.”

When they weren’t making attacks, based on his Cuban heritage, anchors and reporters were writing him off as a joke because he of his awkward grabbing of a water-bottle during his response to Barack Obama’s 2013 State of the Union address. CNN ran a headline that asked “Career Ender?” as Wolf Blitzer posited: “So, can a drink of water make or break a political career?” NBC Nightly News anchor Brian Williams proclaimed that it would be “remembered forever.”

On top of the slurs and jokes also came the usual liberal media slams about him being a part of the GOP’s war on women, poor and the elderly.

The following is a compilation from the MRC archives of the worst attacks on Senator Rubio (so far):

“Almost anybody that’s been around too long, there’s so much ‘no’ attached to it, that you almost need that blank piece of paper. That’s the new model, like, you know, this coconut Rubio down in Florida....Marco Rubio. He’s running against Charlie Crist, who I think has done a great job.”
— MSNBC and CNBC contributor Donny Deutsch on Headline News’s Joy Behar Show, February 22, 2010. “Coconut” is a term used to attack dark-skinned conservatives as being brown on the outside but white on the inside.

“I said ‘coconut’ meaning simple, goofy, bananas...wasn’t even aware it could be a racially charged word.’
— Deutsch in a Twitter posting the next day (ellipses in the original).

“You are a rising star in this party. How is it changing? Because many people worry that people who are Hispanic, African-American and other minorities don’t have a place in this party. You’re becoming something that is more narrow rather than outreaching.”
— Co-host Charlie Rose to Rubio on CBS This Morning, August 29, 2012.


“Look at what the chairman of the Democratic convention, the mayor of Los Angeles, Antonio Villaraigosa, said last night. He said you can’t just trot out a brown face or a Spanish surname and expect people to vote for your candidate. He was referring to you tomorrow night.”
— ABC’s George Stephanopoulos to Florida Senator Marco Rubio on Good Morning America, August 29, 2012.

Taking a Sip of Water = the End of Marco Rubio?

“So, can a drink of water make or break a political career? A U.S. Senator, possible presidential candidate. We’re going to find out, whether he likes it or not.”
— Anchor Wolf Blitzer with the words “Career Ender?” on-screen, teasing an upcoming segment on CNN’s Situation Room, February 13, 2013 referring to how Senator Marco Rubio paused for a sip of water while delivering the GOP response to the State of the Union. A CNN spokesman later tweeted that the headline was a joke.

It Will “Certainly” Be “Remembered Forever”

“Back in a moment with the televised moment from last night that just might live on forever....It’s one of the cruelest aspects of politics in the television age. No matter how well-crafted the content, no matter how thoughtful a person you are, it’s the television moments, the superficial, purely visual moments that are often remembered forever instead. And that will certainly be the case with Florida Senator Marco Rubio’s GOP response last night.”
— Anchor Brian Williams on the February 13, 2013 NBC Nightly News.

“Florida Senator Marco Rubio got some good press this week for saving Nancy Reagan from a fall at a Reagan Library event. But when it comes to the rest of the American senior citizens, Rubio wants to leave them high and dry....Rubio is an early favorite to take the number two spot on the Republican presidential ticket next year thanks to his Tea Party ideology and his pretty boy looks. But his policies are downright ugly.”
— MSNBC host Ed Schultz on The Ed Show, August 25, 2011.

“Senator, you have been called ‘the Republican savior.’ Yesterday, you voted against the Violence Against Women Act. You’ve opposed repeal of ‘don’t ask, don’t tell.’ You opposed universal background checks for gun buyers. You’ve yet to introduce a bill on immigration reform. Is that the future of the Republican Party?”
— Co-host Norah O’Donnell to Marco Rubio on CBS This Morning, February 13, 2013.

Anchor Rachel Maddow: “I thought he [Rubio] was going to give his optimistic Reaganesque speech. This was a claws out, kind of aggressive speech.”
MSNBC’s Chris Matthews: “I thought it was Tinker Toys. I thought it was primitive, something you would hear on a high school debating team....It was almost like a YAFer convention speech, Young Americans for Freedom speech, from the 1950s. There was no originality to it. It was basic. Again it was Tinker Toys. It was a kid’s presentation of a philosophy, reduced to maybe the ninth grade level. I’m sorry, that’s what it was.”
— During MSNBC live coverage following Rubio’s response to the State of the Union message, February 12, 2013.