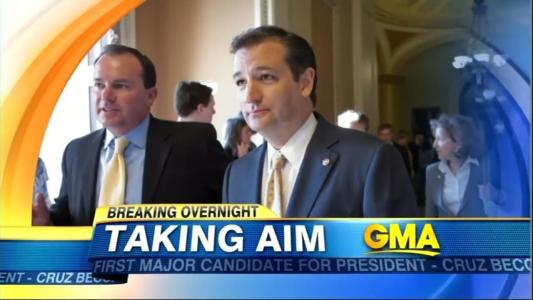 Ted Cruz’s announcement that he is running for president was immediately greeted with hostility from the liberal media. On Monday, MSNBC’s Jonathan Alter questioned, “Is this 1964 when the Republican Party decided it would go with its most extreme candidate?” Donny Deutsch, also on MSNBC, called Cruz “unelectable” and added “I think he’s the worst. I think he’s scary, I think he’s dangerous, I think he’s slimy and I think he brings no fresh ideas.”

On the broadcast networks ABC’s David Muir gave viewers a distorted history lesson, saying Cruz was “The combative Tea Party favorite who shut down the government for days over ObamaCare.” CBS’s Chip Reid, on Monday’s This Morning, noted the Texas Republican senator had “helped shut down much of the government all in protest of President Obama’s health care law. It earned the 44-year-old conservative firebrand animosity from the Republican mainstream including the title ‘wacko bird’ from 2008 GOP nominee John McCain.”

The initial negative reaction to Cruz is in sharp contrast to the “rock star” reception Barack Obama’s presidential announcement received. Since the Tea Party hero first arrived on the scene in 2013, he has been savaged by the press. From constant comparisons to Joe McCarthy from the likes of Chris Matthews to being labeled “dangerous” to families by CNN’s Chris Cuomo to even one critic wishing death on him, the attacks from the media have been intense.

The following is a collection of the Worst Media Attacks on Ted Cruz (so far):

Ted the Hijacker Turns GOP Into a “Cruise Missile” Aimed at U.S. Capitol

“Ted Cruz secedes from the Union. Let’s play Hardball....What if one of the two parties goes ballistic, heading so far off the spectrum that it is no longer competing for the majority of the voters’ loyalty? What if the Republicans get hijacked? If this happens, if the Republican Party becomes a torpedo headed directly for the U.S. Capitol, if it becomes a cruise missile targeted at the government itself — what then? Well, this is the scary ambition of a certain senator from Texas, who not only aims to topple the Republican Party leadership, but smirks publicly at the trouble he has created. To Ted Cruz of Texas, government shutdowns and debt ceiling defaults are all in a day’s work.”
— MSNBC’s Chris Matthews at the top of the February 26, 2014 Hardball.

Cruz is a Lying Jerk!

Host Joe Scarborough: “He’s lying about what Republican Senators were saying in those meetings. He’s exaggerating. But, you know, he’s not lying about Democrats, he’s lying about his own party. You know, a lot of people in Washington including myself, we know what went on inside those meetings and what Ted Cruz is saying is just not true.” ...
Jonathan Capehart, Washington Post: “If there’s bipartisan agreement on Capitol Hill, it’s that Senator Cruz is a bit of a jerk. Well, maybe not a bit of a jerk. He is a jerk. Democrats don’t like him. But Republicans really can’t stand him.”
— During a discussion of Cruz accusing Republicans of being “squishes” on gun bill, on April 30, 2013 edition of MSNBC’s Morning Joe.

CNN Anchor to ‘Dangerous’ Cruz: How Can You Say ObamaCare Isn’t Working?

“How can we say it’s not working when it isn’t implemented yet? How can you say premiums are skyrocketing when they haven’t put the plans into effect yet? You’re being a little dangerous with how much political spin you put on something that’s so central to the well being of so many families?”
— Anchor Chris Cuomo asking GOP Senator Ted Cruz about ObamaCare on CNN’s New Day, November 20, 2013.

“This guy [Senator Ted Cruz] goes pretty far. I think he fits in the tradition of Father Coughlin and [Joe] McCarthy and, of course, maybe to a lesser extent, Pat Buchanan and, of course, [Bill] O’Reilly. These guys are hard right-wing guys. They look a lot a like. They have that, we call the Black Irish look to them. They don’t smile much. It’s quite a tradition here but it does run to the right of the regular Republican party.”
— Host Chris Matthews on MSNBC’s Hardball, June 12, 2013.

“Eye-Rolling” Over Conservative Cruz, “Looks a Little Like Joe McCarthy”

“So Ted Cruz is, just violates my sense. And I think if you mention the name Ted Cruz to other Senators, you just get titanic oceans of eye-rolling, because you’re a freshman, you don’t go in and take over hearings. Like hang around and learn how it’s done. And it’s like the most un-conservative act to come in two weeks into the job and decide the Senate exists for you to take it over. And so I think he’s made a lot of enemies. It doesn’t help that he has a face that looks a little like Joe McCarthy, actually.”
— New York Times columnist David Brooks in a 92Y Campaign for the American Conversation discussion hosted by former ABC, CBS and CNN reporter Jeff Greenfield, April 21, 2013.

How Do You Solve a “Problem” Like Ted Cruz?

“Let me ask you a question about Ted Cruz. I’m reminded of that song in The Sound of Music, ‘How do you solve a problem like Maria?’ where the nuns were trying to figure out what to do with this loose cannon. To me that’s kind of, how do they solve a problem like Ted Cruz in the Republican caucus in the Senate?”
— CNN State of the Union host Candy Crowley to her political panel, February 16, 2014.

“Republicans are using a United States prisoner of war as a political tool in an attempt to make President Obama look bad. That’s the story....[After a clip of Texas Senator Ted Cruz saying the trade sets ‘a very dangerous precedent’] Ted Cruz has zero credibility. He has zero foreign policy experience. He’s a guy from Texas who doesn’t have a clue. All he knows is that he’s got a big name and a big state behind him and he can get on any show he wants. And it’s all pablum, anything to take down the President. There’s nothing American about Ted Cruz.”
— Host Ed Schultz on MSNBC’s The Ed Show, June 2, 2014.

“Ignorant” Cruz Playing to the “Illiterates” on Guns

“This guy, what he is saying, the way he is framing his question, suggests complete, utter ignorance. I’m talking about Ted Cruz here and I have brought this up before. Complete and utter ignorance and anybody – conservative jurists will agree with me and they do, that when he goes on this line of attack about violating the Second Amendment, it suggests complete, utter ignorance of what the Second Amendment says and what Scalia, Thomas, and the conservative court said in 2008 about what the Second Amendment is and what it is not. So did Ted Cruz not go to law school? Has he ever been to law school?
...
I’m just wondering why would he use his seat on the Judiciary Committee if he went to Harvard to put forward a willfully ignorant statement about this bill violating the Second Amendment, because it does not. And Ted Cruz knows it does not. So who is he playing for? Is he playing for people who can’t read, for illiterates?”
— Host Joe Scarborough attacks Cruz for taking on Senator Dianne Feinstein on her gun control bill on the March 15, 2013 Morning Joe.

“Erica, I stated earlier that he’s completely unelectable, obviously an interesting character and obviously he’ll have a place at the table but unelectable for a host of reasons. And when I look at him, basically he’s accomplished nothing. He’s involved, I think, in two bills and he had a vote in the Senate last Saturday that had 22 votes. He’s an obstructionist. He brings no new ideas to the table, other than, no, and I think this country is tired of that, and am I missing something? Because I think he's just a piece of theater and nothing more...I want to go back to this smart guy because I don’t think-everybody keeps saying he’s a smart guy. This is a guy who basically is saying that climate change is not a fact...So wait, that's not smart. That dumb. But that's ignorance. That word is ignorant and that’s not smart...I think he’s the worst. I think he’s scary, I think he’s dangerous, I think he’s slimy and I think he brings no fresh ideas.”
— Donny Deutsch on MSNBC’s Morning Joe, March 23, 2015.

Host Chris Matthews: “Let me go to you Brian. The way I’m chalking this up, this right wing hysteria, if you will — maybe it’s logical on their point of view, the way they’re thinking about demographic change — but guns, immigration and gays. Is that your reading, that those are the stimuli to these people when they organize these hate groups?...Who do they root for? Who do they root for?”
Brian Levin, Center for Study of Hate & Extremism: “They don’t root for anybody now.”
Matthews: “They don’t root for Rand Paul? Pat Buchanan? I mean, who? They must like this new guy Ted Cruz. They must love Ted Cruz, c’mon!”
— Talking about white supremacists, militias and other extremist groups on MSNBC’s Hardball, March 6, 2013.

Ted Cruz = “The David Koresh of the Republican Party”

“Do you think Ted Cruz is a bit like the David Koresh of the Republican Party? He’s a bit like a character who believes himself to be anointed, believes himself to be a prophet, ignores everything, and torches the place in the process....Is he the David Koresh of the Republican Party?”
— MSNBC host Martin Bashir tossing out a question to his panel, October 16, 2013 referring to the Branch Davidian leader who led 76 members of his cult to their deaths during a 1993 standoff near Waco, Texas.

“Question: If Ted Cruz and John Boehner were both on a sinking ship, who would be saved? Answer: America. Harsh? Look around you at what is happening to America and you will see harsh. I am not talking about closed parks and monuments. I am talking about the funds cut to nearly 9 million mothers and young children for food, breastfeeding support and infant formula. That is harsh. Making a war against babies is harsh. And for what? Because Cruz, Republican Senator from Texas, has grown so drunk on the sound of his own voice and so besotted with illusions of his own grandeur that he believes halting government today will propel him into the White House tomorrow?”
— Politico’s chief political columnist Roger Simon in an October 14, 2013 column.

NPR’s Nina Totenberg: “I actually know Cruz because he, for many years he argued cases for Texas in the United States Supreme Court. He is very smart. He is very glib, and he made sure that the attention was focused on him. This was not a distraction. This was Ted Cruz doing this [going after Chuck Hagel].”
Politico’s Evan Thomas: “You need to watch this guy, because there are a lot of demagogues out there, but not that many who are that smart. He is really, really smart, and that makes him potentially dangerous.”
— Exchange on Inside Washington, February 22, 2013.