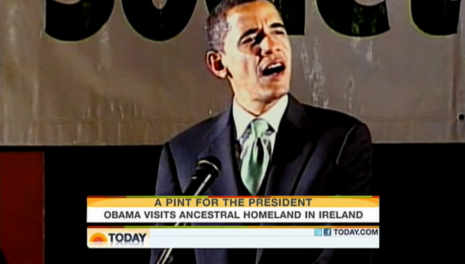 Over a chorus of gleeful Irish pub-goers literally singing Barack Obama's praises, NBC's Al Roker, broadcasting live from Ireland on Monday's Today show, explored the current president's Irish roots as he observed: "As St. Patrick's Day approaches in Moneygall the townsfolk join in the chorus, determined to keep hope alive." The Today show weatherman began the celebratory segment by exclaiming: "In a small pub in Ireland they're still celebrating Obama's victory. Dancing in honor of their adopted son."

The following is a complete transcript of the segment as it was aired on the March 16, Today show:

AL ROKER: You know, they say there's a wee bit of Irish in everyone. That include President Barack Obama. That's right it was first revealed last year that part of Obama's roots traced back to a village here in Ireland called Moneygall. Well it's been Obama territory, ever since.

ROKER: When Barack Obama was sworn in as President of the United States-

OBAMA: So help me God.

ROKER: -it was a historic day for the country for African-Americans, and as luck would have it, a great day for the Irish. In a small pub in Ireland they're still celebrating Obama's victory. Dancing in honor of their adopted son.

OBAMA: It turns out that I have Irish heritage. I am, I do. No this is true.

ROKER: While more has been made of Obama's roots in Kenya and his upbringing in Kansas, the discovery that his family tree traced back to an Irish immigrant named Falmouth Karney hailing from Moneygall in County Offaly, was big news for this tiny village west of Dublin.

FIONA FITZSIMONS, ENECLANN RESEARCH: My immediate reaction was, good God, at last there was an American presidential candidate who wasn't linked to Ireland somehow or another.

ROKER: The road to the White House has often been paved with green. 24 of the 44 U.S. presidents had some form of Irish ancestry.

UNIDENTIFIED MAN: John F. Kennedy, of course came to Wexford. The late Ronald Reagan came to County Tipperary, and of course Bill Clinton came to Ireland as well, many times.

ROKER: Though Obama's link makes him only about three percent Irish, seems everyone is clamoring to claim him as their own.

ROKER: First to stake a claim is Henry Healy, a Moneygall resident who's believed to be Obama's eighth cousin.

ROKER OVER VIDEO OF PEOPLE SINGING AND KID IN OBAMA T-SHIRT: As St. Patrick's Day approaches in Moneygall the townsfolk join in the chorus, determined to keep hope alive.

PEOPLE SINGING: There's no one as Irish as Barack Obama!

UNIDENTIFIED WOMAN#2: We're waiting for President Obama to visit Moneygall and to perform for him.

ROKER: In fact that song has had five million hits on Youtube.

MEREDITH VIEIRA: Is that where the "O" comes from in Obama?