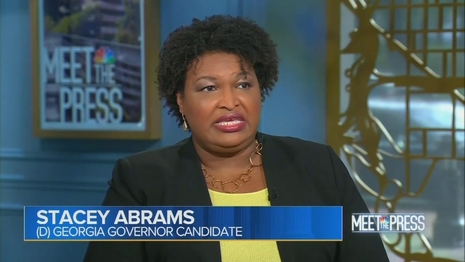 Chasmar wrote that she “co-chaired a racial justice organization that’s financed by an executive of Alibaba, a Chinese firm that reportedly helped create surveillance technology used against Uyghur Muslims.”

Due to her campaign, Abrams is now listed as “co-chair emeriti.”

Abrams became involved with the group in April 2021 and said in a statement that she was “excited” to be part of a group that “puts Black leaders in the driver’s seat – with Black activists on the ground who understand how racism plays out in their community defining both the problem and the solutions.”

Backed by “18 partners,” Chasmar noted one of them was the Joe and Clara Tsai Foundation with Joe being the co-founder and “executive vice chairman of Alibaba Group, one of China’s largest technology firms that actively works to advance the interests of the Chinese Communist Party (CCP).”

Chasmar further reported that not only has Alibaba been under the thumb of the Chinese government, they’ve reportedly assisted in “fund[ing] several Chinese artificial intelligence companies blacklisted by the U.S. for human rights abuses” and include Uyghur concentration camps.

If a Republican running for governor or Senate in a key swing state and had such ties to a foreign adversary, you’d bet that this would have already been reported on CNN and MSNBC and in the pages of the major liberal papers.

To see more, check out the full FoxNews.com piece here.