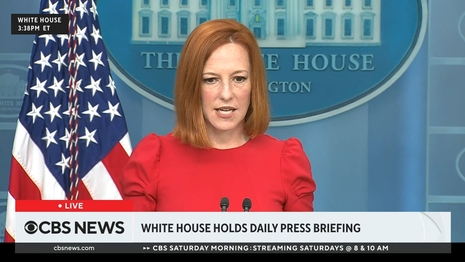 On Thursday afternoon, the White House announced the long-expected departure of Press Secretary Jen Psaki, who will end her turn at the White House Briefing Room podium on May 13, ending a 17-month run that saw her become a household name with spin of the administration’s struggles and presidential gaffes and viral exchanges with Fox’s Peter Doocy.

President Biden said in a statement that Psaki “set the standard for returning decency, respect and decorum to the White House Briefing Room.” Without a sense of irony, the Biden statement added that she’s “rais[ed] the bar, communicating directly and truthfully to the American people, and keeping her sense of humor while doing so.”

Psaki’s departure had reportedly been in the works for months. Having stated herself that she wouldn’t stay beyond about a year, word began trickling out February 23 that Psaki had been taking meetings with liberal network executives, who were aggressively competing for her services.

On April 1, Axios broke the news that she had accepted a position as an MSNBC contributor and host on NBCUniversal’s streaming platform, Peacock.

As for Jean-Pierre, the presidential statement praised her as someone who “not only brings the experience, talent and integrity needed for this difficult job, but she will continue to lead the way in communicating about the work of the Biden-Harris Administration.”

In addition to her professional career, Jean-Pierre is the partner of longtime CNN correspondent Suzanne Malveaux (with whom they share a daughter).

Psaki herself weighed in on the announcement, tweeting a thread from the @PressSec account, writing first that there’s “[l]ot’s to say about how grateful I am to [the President] and [the First Lady] and the Biden family for trusting me to serve as [Press Secretary] and plenty of time before my last day to share, but today is about [Karine Jean-Pierre], so a few thoughts on this remarkable woman who will soon be behind the podium every day.”

Psaki continued by noting Jean-Pierre “will be the first black woman and the first openly LGBTQ+ person to serve as the White House Press Secretary,” serving as proof that “[r]epresentation matters and she will give a voice to many, but also make many dream big about what is truly possible.”

Summarizing her career “in government and politics in NYC” and having worked for Biden while he was Vice President, Psaki gushed over her as a “passionate” and smart” woman with “a moral core that makes her not just a great colleague, but an amazing Mom and human.”

“One of our first conversations was about how to build a drama free team that focused on doing the job and also supporting each other while playing a role every day in rebuilding trust in government. Grateful to have had her by my side. I can’t wait to see her shine as she brings her own style, brilliance and grace to the podium,” Psaki concluded.