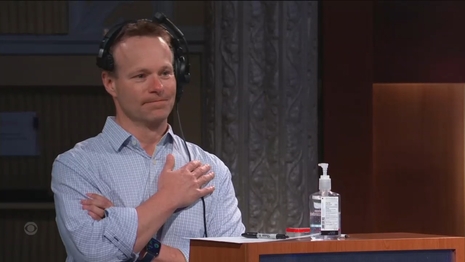 Former CBS and MSNBC producer Chris Licht formally took the helm of CNN on Monday morning and, in a 650-word note to employees, said he wouldn’t be in “the weeds of day-to-day editorial decision making” (like former CNN head Jeff Zucker), will take on “‘group-think,’” and ensure CNN is “respectful of differing viewpoints.”

Licht — who followed through on his April 18 promise to quit Twitter by May 2 — began with the usual platitudes by thanking everyone he’s met with as “[t]here truly is no substitute for in-person interactions.”

He also graciously thanked the three CNN executives (Michael Bass, Amy Entelis, and Ken Jautz) who led CNN after Zucker’s overdue ouster for their “incredible work...leading this extraordinary organization through various challenges, leadership changes, and, of course, the tragic conflict and humanitarian crisis in Ukraine.”

Licht notably described them as having “embodied the ethos that I value most: put your head down, tune out the noise and do the quality work our viewers need from us now.”

A change indeed from Zucker’s fixation on the drama, far-left partisanship, and snark.

Pivoting to CNN going forward, Licht predictably gave employees a pep talk by saying they work for “the greatest and most respected news organization in the world” and that “all of us are fortunate stewards of the bold vision of Ted Turner.”

Then came the good stuff, starting with Licht promising to uphold CNN’s mission “to inform, engage and empower the world” and make “all decisions through the lens of” the following:

Is this good for the CNN brand? And as a leader, I believe I best serve this mission by making sure the right people are in charge and by empowering them to do their jobs as effectively as possible. You can be assured that will be my focus.

Given CNN’s current position in terms of ratings and respectability, Licht will need to make wholesale changes.

Licht then dropped this veiled shot at Zucker and his micromanagement of CNN (which most famously included a story in The New York Times Magazine of Jake Tapper being directed by Zucker during a tense interview with Kellyanne Conway):

I will be a very engaged consumer of our content, but I’m not here to get into the weeds of day-to-day editorial decision making. My goal is to support all of you in every way I can and not unnecessarily duplicate or undermine the efforts and leadership of the people running their part of the organization.

Instead, Licht said, his job is “to set expectations, make the tough calls, fight for the resources you need, and remove any obstacles that keep you from doing your best work.”

And in reference to how “[s]adly, too many people have lost trust in the news media,” Licht challenged the former news network to act as “as beacon in regaining that trust by being an organization that exemplifies the best characteristics of journalism: fearlessly speaking truth to power, challenging the status quo, questioning ‘group-think’ and educating viewers and readers with straightforward facts and insightful commentary, while always being respectful of differing viewpoints.”

If Licht actually means what he says, CNN would look unrecognizable from its current state.

Licht closed by announcing a company town hall for Thursday, adding “transparency is very important to me” while also “sharing more of my vision” for CNN.