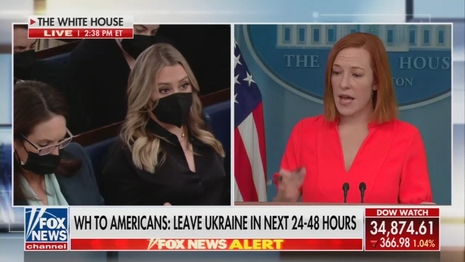 During a tense Friday White House press briefing in which National Security Adviser Jake Sullivan warned Americans to leave Ukraine in the next 24 to 48 hours ahead of a likely Russian invasion, Fox’s Jacqui Heinrich brought the heat to both Sullivan and Press Secretary Jen Psaki about whether President Biden still believes pre-invasion sanctions are “stupid” and whether a bloody war in Ukraine would put what Heinrich later called “a black mark on this administration.”

Heinrich's first questioned Sullivan with a series of short but crucial points:

Did the U.S. wait too long to arm Ukraine, especially with respect to weapons that could defend against an airstrike like you laid out? Did they wait too long to move U.S. forces to NATO countries and does the President still view the idea of pre-invasion sanctions as a stupid question?

Sullivan insisted the U.S. hasn’t “wait[ed] too long” as they’ve given them “$650 million in defensive assistance” since Biden took office and NATO allies support their troop movements. But channeling Psaki, he didn’t touch the topic of sanctions.

Thankfully, Heinrich didn’t let him get away, repeatedly asking about “the pre-invasion sanctions” as “you didn’t answer that part of my question.”

As Heinrich said on FNC’s The Story with Martha MacCallum, Sullivan’s logic didn’t make sense as he then claimed: “sanctions are intended to deter and in order for them to work to deter, they have to be set up in a way where if Putin moves, then the costs are imposed.”

So, how would sanctions “deter” someone from invading if they’ve already invaded and taken over the country?

Heinrich also had a go-around with Psaki, starting with what the government’s doing (if anything) to assist Americans evacuate (click “expand”):

HEINRICH: Has the U.S. shared the latest intelligence with Ukraine and do — does the U.S. feel the Ukrainian government is properly preparing its citizens for a possibility of war because it seems like they keep downplaying it?

PSAKI: Well, I'm not going to speak with how the Ukrainian officials — leaders speak or engage with their citizens, but we do engage very closely with them, sharing of information, as we do with our European counterparts and that has been the case at every point in this process.

HEINRICH: Is the State Department doing anything right now to help Americans to get out of Ukraine or just warning them to get out on their own?

PSAKI: Well, we have been warning for several weeks now, if not longer, that American citizens should depart and I think you heard our national security adviser give a pretty stark warning of what would happen — on purpose — what would happen if Russia were to invade in the difficulty of not just being in the middle of a military zone, but also the difficulty of departing or getting out, and the fact that departure — means of departure could be cut off, and we feel important for American citizens in Ukraine to understand. We have been conveying as American citizens don't have the means to depart, that we would provide assistance for those purposes. That has been the case for several weeks now.

She also asked a key question of, “if we don't know if Putin has made up his mind, why are we hearing this warning from Jake Sullivan that Americans should get out ideally in the next 24 to 48 hours,” which Psaki conceded as stark but necessary to preemptively get ahead of an invasion as a bloody war featuring airstrikes would make life “very difficult” for Americans.

Things came to a head when she went big picture about how this marked “the second evacuation of Americans in the course of six” months (with Afghanistan being the other), but before she could get the word “months” out, Psaki interjected and, from there, it was on (click “expand”):

PSAKI: It’s not actually an evacuation, to be clear. American citizens can depart Ukraine. There are means of departing Ukraine. This is not a country where we are at war where we have tens of thousands of troops who have been fighting a war for 20 years, so it's incredibly different.

HEINRICH: Correct. You are correct in that. But it’s the second time we have urged American citizens to get out of a country.

HEINRICH: But when I mean — Afghanistan —

HEINRICH: — because the question then is —

HEINRICH: But these are the two major events that have happened under this administration, and what does the — what do you guys say —

PSAKI: I would say the people in Ethiopia would differ with that, as would the people in Kazakhstan or other parts of the world where there has been — they have been under dangerous circumstances, and they look to the United States to provide up to date information of their safety and security in the country.

Heinrich had one final question, which led Psaki to respond with “who’s questioning us”:

[T]he President has frequently talked about getting out of Afghanistan as a major event. It has impacted his polling. This is a current event that is underway. The question is, what does the administration say to critics who are looking at these two events and questioning the administration's foreign policy approach?

When Heinrich mentioned Republicans like Mitch McConnell, Psaki boasted of Biden’s Afghanistan withdrawal and “courage” to implement their plan and they’re working here “to prevent war.”

Elsewhere in the briefing, a number of reporters brought the heat in both portions.

Most notably, Sullivan ducked and/or struggled to answer questions from Bloomberg’s Jennifer Epstein and Reuters’s Jeff Mason about how much of Ukraine would Russia seize and then dismissed Globo Media’s Racquel Krähenbühl question on why Vice President Harris will be attending the Munich Security Conference instead of President Biden (click “expand”):

EPSTEIN: Thanks, Jake. Two quick questions. One, are you looking at this being some kind of attack on Kyiv? On the Donbass? On another region? Do you have any sense of that? And then what is the level of confidence that the intelligence community has in what they're hearing about this plan, especially about the potential for it to come before the end of the Olympics?

KRÄHENBÜHL: Next week, Vice President is going to Germany for the Munich Security Conference. Why isn't President Biden going? Wouldn't it be a good time to engage with his allies in person? Is he doing enough to avoid a war?

MASON: You mentioned the possibility of an assault on Kyiv specifically. What is your sense if Putin does decide to invade Ukraine, is he looking to take over the country, or part like Crimea in 2014?

To see the relevant briefing transcript from February 11 (including more questions from the likes of CBS’s Nancy Cordes and Steven Portnoy, NPR’s Franco Ordoñez, and PBS’s Amna Nawaz), click here.