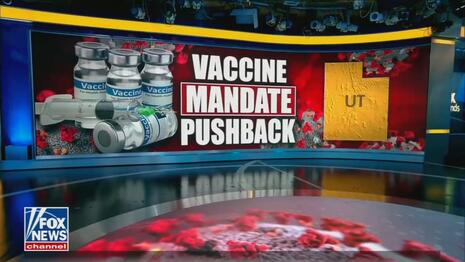 The left-wing Salt Lake Tribune took COVID-19 authoritarianism to new heights in an editorial posted Saturday that called for the deployment of U.S. troops to prevent unvaccinated people from ever being able to leave their homes until they submit to the shots.

The screed came at the end of a 939-word bender dripping with disgust for humanity as unwilling to crush the virus, civil liberties be damned. Clearly bitter that we’re not Australia or China, the Tribune claimed America “might have headed off omicron with a herd immunity-level of vaccinations, but that would have required a vaccination mandate, which our leaders refused.”

Stating without evidence that full vaccination “might” have stopped COVID in its tracks (even though those under five are still ineligible and the Delta and Omicron variants didn't originate in the U.S.), the paper said Governor Spencer Cox (R) could have proved Utah was “a truly civilized place” if only he had implemented a state vaccine mandate and “[gone] as far as to deploy the National Guard to ensure that people without proof of vaccination would not be allowed, well, anywhere.”

“But it may be too late for that, politically and medically,” they added.

As Phil Kerpen tweeted, you wonder if The New York Times is jealous that they didn’t think of this idea first to sic the military to squash dissent.

What’s next, Tribune? Calling for welding the unvaccinated in their homes like China?

Here’s other highlights from this tyrannical rant (click “expand”):

That wan fluttering noise you hear coming from the direction of the Capitol building is the sound of the state of Utah waving the white flag of surrender in the battle against the COVID-19 pandemic.

It’s tragic. It’s disgraceful. And there is lots of blame to go around.

All this news is shocking even as it is not at all surprising. For more than two years now, officials at all levels and in all branches of our government have missed chance after chance to get a handle on this rapidly spreading and rapidly evolving virus.

Rather than call for the kind of patriotic coming together that Americans responded to after Pearl Harbor and 9/11, we were assured that it was not a real problem, that it would “magically disappear,” even that it was all a hoax, a plot to extend the power of the federal government and/or further enrich Big Pharma.

Government officials, mostly but not exclusively Republicans, were apparently determined not to be caught governing in the face of this challenge.

Instead we were left to listen to various forms of foolishness and misinformation, promises of being rescued by everything from a bleach cocktail to horse dewormers to, most recently, drinking our own urine.

So now we are free all right. Free to fend for ourselves.

Of course, none of the major broadcast networks showed concern for this story on their flagship morning or evening newscasts. Instead, Fox & Friends Sunday covered this hot take repeatedly, denouncing it for what co-host Pete Hegseth called one of many “attempts to use COVID to block our freedom” and a world “looking like Australia.”

Co-host Will Cain explained the Tribune was “facing backlash, I should hope so, over its troubling recommendation to state leaders who refuse to mandate the COVID vaccine....So, stay in your house or face the National Guard.”

“A major American newspaper asking that the United States military be used to keep unvaccinated people in their homes. No small moment,” he later added.

Fox News medical contributor Dr. Marc Siegel was incensed, saying “if there is one thing we learned over the last 24 hours with Rabbi Charlie in Colleyville, Texas, is that we need kindness as he always says rather than fear and intimidation.”

Siegel went on to say that if the National Guard were to “be deployed, how about we find some of these monoclonal antibodies we need to treat people who have severe or impending severe cases of COVID, not to intimidate people[.]”

Calling it a “complete misuse of the National Guard,” Siegel later said this behavior was an example of “[p]eople...doubling down on the same mistakes they were making before” by “hitting you over the head with the vaccine” instead of having conversations to persuade people about its effectiveness.

To see the relevant FNC transcript from January 16, click “expand.”

PETE HEGSETH: Still ahead, a Utah editorial board calls on their governor to deploy the National Guard on the unvaccinated. Dr. Marc Siegel joins us on the attempts to use COVID to block our freedom. Speaking of looking like Australia.

WILL CAIN: A major Utah newspaper facing backlash, I should hope so, over its troubling recommendation to state leaders who refuse to mandate the COVID vaccine. In an op-ed, The Salt Lake Tribune suggests “the governor's next move would be to find a way to mandate the kind of mass vaccination campaign we should have launched a year ago, going as far as to deploy National Guard to ensure that people without vaccination would not be allowed, well, anywhere.” So, stay in your house or face the National Guard. Here to react, Fox News medical contributor Dr. Marc Siegel. Dr. Siegel good morning.

CAIN: What is your reaction to the op-ed from The Salt Lake Tribune?

SIEGEL: Well, look, if there is one thing we learned over the last 24 hours with Rabbi Charlie in Colleyville, Texas, is that we need kindness as he always says rather than fear and intimidation. If the National Guard of Utah is going to be deployed, how about we find some of these monoclonal antibodies we need to treat people who have severe or impending severe cases of COVID, not to intimidate people when the real way to approach the vaccine as Dr. Andy Pavilla at University of Utah, who I’ve interviewed says, is to talk to people, talk to parents, talk to children. He’s the head of infectious diseases for pediatrics at University of Utah. He also handles adults. He talks to people about risks and benefits, not intimidation. Complete misuse of the National Guard. Maybe they even were hearing the President the other day saying he’s going to haul out FEMA and the National Guard, fine. But use it to help people who don't have the supplies they need. Don't have the vaccines or don't have the treatments which none of us have and the testing, not to — to intimidate people and potentially harm them.

CAIN: A major American newspaper asking that the United States military be used to keep unvaccinated people in their homes. No small moment.

CAIN: But, Dr. Siegel, quickly as we go out, you know, for anyone who has questions about the vaccine, much of those questions have fed by the fact they feel like they're propagaized to. That honest conversation you described just has simply not been taken place. Instead, there’s been hectoring. There’s been calls for the National Guard to lock down the unvaccinated and there’s been untruths every step of the way to your point and that does not breed confidence. That — people see through and see propaganda and that doesn't believe any type of belief or faith in the vaccine.

SIEGEL: People are doubling down on the same mistakes they were making before. They were hitting you over the head with the vaccine and calling it a vaccine — a pandemic of the unvaccinated before. Now, they're doubling down. Let’s listen to my grandmother who used to say you catch more bees with kindness and with honey and with vinegar. And I imagine Pete in the background cringing about the use of the National Guard to try to force people to take vaccines or separate them if they don't. Imagine that, a hero like Pete, what he thinks about that, Will.

CAIN: Maybe I’ll ask him in just a moment. But, hey, how about not just kindness as your honey, but how about honesty and truth as well. And I think that’s what you called for this morning. I’ve heard you.

CAIN: Have a honest and truthful conversation. People can see right through it.

CAIN: — you lying to them and propagandizing them.

SIEGEL: I agree with that, Will.

CAIN: You, preferably you, Dr. Siegel. Yeah, I know.

SIEGEL: You have to say —

CAIN: I know you do.

SIEGEL: — how does the vaccine work and how doesn’t it work? Absolutely.

CAIN: And we’ve had that honest conversation with each other here and on The Will Cain Podcast. I know you do believe in it. I’m using the proverbial you for anyone watching, not Dr. Siegel. He doesn’t propagandize you, but you’re being inundated with it. Let’s get a little breakthrough cases of the truth.