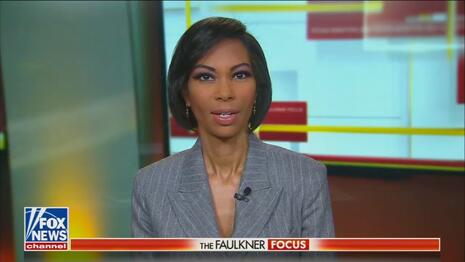 It’s no secret that The Daily Beast hates the Fox News Channel. On Tuesday, The Beast published an item allowing anonymous Fox News staffers to grossly condemn former White House Press Secretary Kayleigh McEnany’s signing as a contributor, including one referring to her as a “mini Goebbels.”

And amidst their chest-puffing about the evils of Fox News, The Faulkner Focus host and Outnumbered co-host Harris Faulkner had become a prime target for the woke website. But when you dig into their attacks on her, one has to wonder if they would have ascribed the same verbiage for a Black woman at another network.

On Sunday, “woke-stapo” member Justin Baragona and former FoxNews.com writer Diana Falzone slammed Faulkner’s noon Eastern show Outnumbered as a partisan free-for-all and sought to discredit her as a journalist.

Referring to a December 11 exchange with Fox News contributor Marie Harf, they wrote that Faulkner had a “blow-up” in which she “shouted” Harf “down” and implied that led to Harf’s absence as one of the show’s five panelists.

Baragona wrote a piece at the time on Faulkner and Harf, stating in the headline: “Fox News Anchor Blows Up When Liberal Pundit Calls Out Lack of COVID Death Coverage.”

Fox News anchor Harris Faulkner received a sharp rebuke on Wednesday when she posed a question to a Democratic pundit based off President Donald Trump’s baseless claim that his rivals want the economy to stay closed through the 2020 election in order to defeat him, prompting her to snap back that she was “just asking questions.”

A month later, Faulkner demolished his insinuation of her as a Trump mouthpiece when she grilled Trump on race relations in one of Trump’s tougher interviews as President. Afterward, USA Today admitted it “earned her plaudits.”

And on that theme, Faulkner had routinely been selected to host special programming, including one on Sunday about the coronavirus vaccine and fighting hesitancy in minority communities.

Back on The Beast front, Saturday Night Live simp Matt Wilstein blogged Faulkner’s contentious May 7, 2020 interview with then-White House counselor Kellyanne Conway, stating during a back-and-forth that “Faulkner shot back, before catching herself and taking a friendlier tone.”

Going back even earlier, Wilstein characterized Faulkner in an August 14, 2017 piece that she was “frustrated with those unconvinced by President Trump finally condemning neo-Nazi hate groups two days after an attack.”

Finney added in the piece:

While sexist, racist attacks on Black women aren’t new, calling them out exposes the complex set of issues, biases and expectations that Black women must still navigate to be seen, heard, and taken seriously while also expanding our collective understanding of the depth, expanse, and excellence of Black womanhood.

And that's just one of many examples of The Daily Beast pushing back against what they had felt were horrible Black stereotypes (including defenses of Michelle Obama and Susan Rice). Aside from their noteworthy, straight news-like reporting on Joy Reid's sordid past, it's doubtful they'd exhaust this much oxygen attacking her and do so with such hostility.

Speaking of Reid, some would point out the fact that this author covers The ReidOut for NewsBusters. On that basic point, they would correct. That said, there’s this reality: Reid’s show has been built and fortified on the principles of condescension, disgust, and hatred for anyone and everyone who disagrees with her.

In addition, Reid had continued to rise in prominence despite a track record of anti-Semitism, homophobia, and racism. On Tuesday’s show alone, she seemed to dismiss Senator Joe Manchin (D-WV) as a racist and sexist for having helped sink Neera Tanden’s nomination to lead the Office of Management and Budget (OMB).

So how do we summarize this reality where The Daily Beast doesn’t practice what it preaches, we have this to say: play stupid games, win stupid prizes.