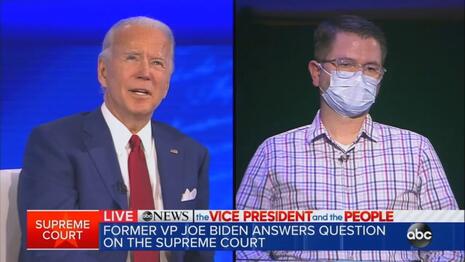 Chick-fil-A is delicious, Jesus is Lord, the sky is blue, water is wet, and town hall questioners are covert liberal activists. As FoxNews.com reporter Tyler Olson found on Friday, two of ABC’s Biden town hall questioners “had ties to high-profile Democrats, including one questioner who previously worked as a speechwriter in the Obama administration.”

And, no, that didn’t include the fact that ABC chief anchor George Stephanopoulos was a Bill Clinton lackey in the early 1990s.

This came on the heels of how, just within the last month, ABC had liberal partisans in their September 15 Trump town hall and NBC featured “undecided voters” that were Biden supporters in their October 5 confab.

Olson found that the sixth questioner was one Nathan Osburn, who was listed in a chyron as having simply worked in “communications.” In actuality, Olson reported that Osburn “a former speechwriter” in the Obama administration and specifically the Commerce Department and Small Business Administration.

As for this election cycle, Osburn was “created a ‘Philly for Pete’ group” to support Pete Buttigieg during the primary and been touted by the LGBTQ Victory Institute.

Osburn’s question was predictably from the left and, with a nod to Buttigieg, helped usher Biden closer to coming out in favor of court-packing: “So, what do you think about ideas from people like Pete Buttigieg and others to put in place safeguards that will help ensure more long-term balance and stability and what do you say to LGBTQ and others who are very worried right now about erosions of their rights and our democracy as a whole?”

Stephanopoulos presented her as merely someone who’s voted for president for the first time, but Olson found that she was anything but some generic voter and instead the wife of a former Democratic candidate (click “expand”):

Another questioner at the town hall was Mieke Haeck, who ABC presented as a physical therapist from State College, Pa.

Haeck is also the wife of Ezra Nanes, a high-profile Democrat in Pennsylvania who in 2018 ran a campaign challenging Republican state Senate Majority Leader Jake Corman. Nanes is currently an at-large member of the Centre County Democratic Committee. Centre County is the county in which State College resides.

"My youngest daughter is transgender. The Trump administration has attacked the rights of transgender people, banning them from military service, weakening nondiscrimination protections and even removing the word 'transgender' from some government websites," Haeck said. "How will you as president reverse this dangerous and discriminatory agenda and ensure that the lives and rights of LGBTQ people are protected under U.S. law?"

"I will flat out just change the law," Biden responded.

Despite the fact that liberal networks will continue lying to their viewers about the make-up of their town hall audiences, actual journalists and media observers shouldn’t change their approach in fact-checking the backgrounds of the questioners.

Rather, they should redouble their efforts in light of the irresponsible and shameful lying on the part of the networks that claim to be working on behalf of the public interest.