On Sunday night, taxpayer-funded NPR national correspondent Sarah McCammon got into a Twitter debate with The Daily Mail’s David Martosko in which she endorsed reporters refusing to stand for the national anthem while covering events like campaign rallies, because that would mean reporters would be “participat[ing]” and thus endorsing the rally instead of being “there to work.”

I'm amazed at how some reporters & political aides blow off the national anthem at campaign events. Just now, a Sanders aide wearing his hat during it, Warren aides sitting on the floor, a guy with a Corey Booker [sic] staff credential lying on the floor. A dozen reporters in chairs.

About five hours later, McCammon decided that this was an issue where the press would draw a line when it comes to objectivity:

Huh, so liberal journalists insist on dropping objectivity on issues like promoting illegal immigration or bashing the President in the name of standing up for what’s right, but the Star-Spangled Banner? No thanks!

Martosko responded by pointing out a basic truth: 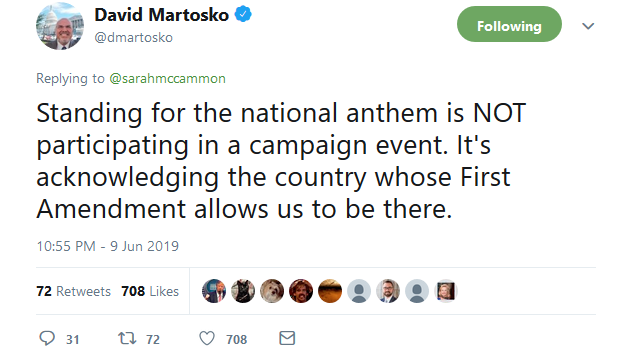 Instead of finding common ground, McCammon doubled down by insisting that while one should be respectful, it’s perfectly reasonable to ignore a prayer or playing of the national anthem to instead make sure one is prepared for whatever it is they’re covering: 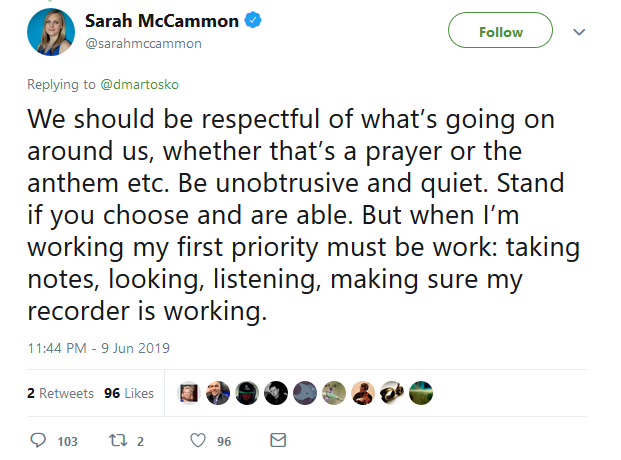 Martosko then dropped the hammer: 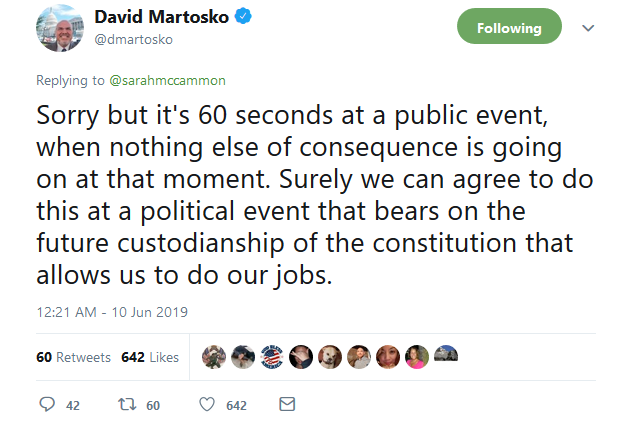 To close out this back-and-forth, Martosko also noted some examples of how those things aren’t actually respectful:

Also, lying down on the floor and munching on a sandwich during the national anthem isn't respectful of what's going on. If you want to make a political statement, BTW, that's different. But IMO treating the moment with disregard because it's inconvenient is not okay.

So, to recap, someone who is subsidized to have these views by those of you reading in the United States (to go along with the other rampant bias at NPR and PBS).

Unless something has dramatically changed, standing at a campaign rally for, say, Julian Castro, or even a sporting event like a NASCAR race or Phillies game for the playing of the Star-Spangled Banner doesn’t imply an endorsement of any particular candidate, driver, or team. Rather, it’s brief and shared acknowledgment of the freedoms that we’ve been afforded as Americans go along with those who’ve perished to protect them.