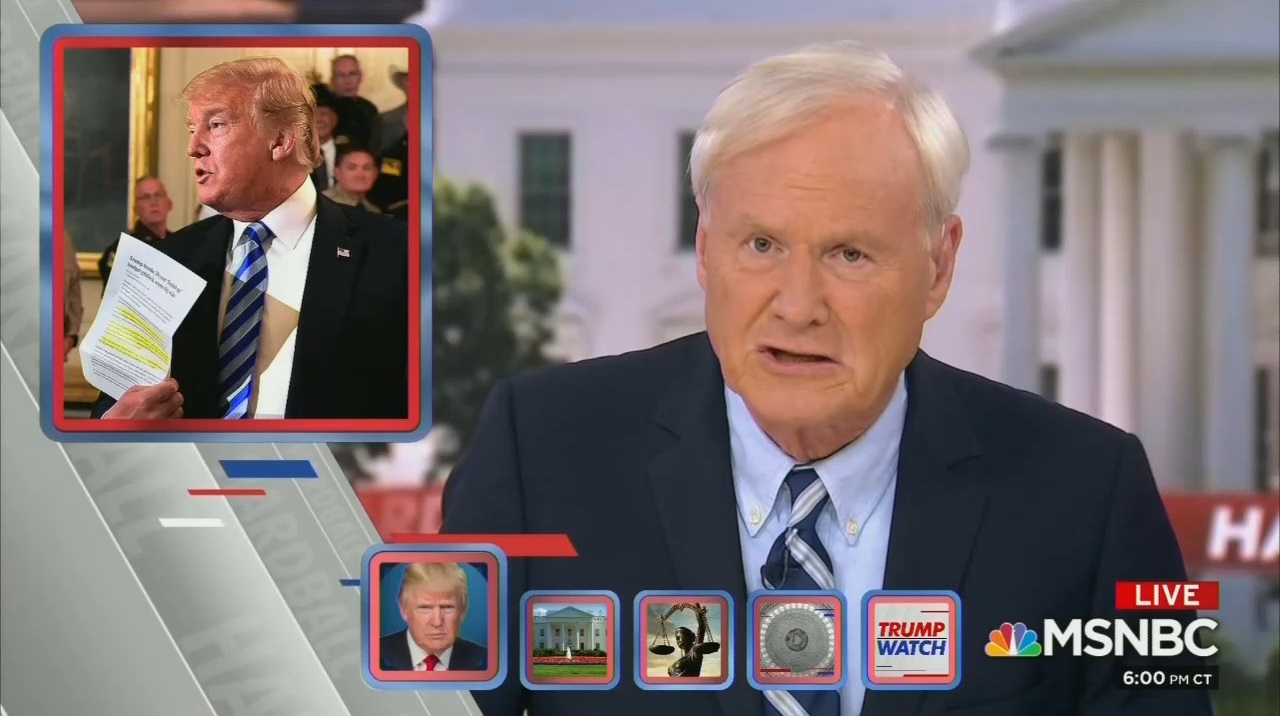 Often times when watching MSNBC’s Hardball, it’s one moment that stands out in the sea of liberal bias and tomfoolery from longtime host Chris Matthews. But in other instances, it’s a potpourri of lunacy with Matthews and guests trying to one-up each other as walking Notable Quotables.

Thursday’s show was a combination of the two with Matthews doing some heavy lifting with some help from New York Times columnist and Never Trumper Brett Stephens.

Click through to the next slide and we’ll get started with the latest case of irony from Matthews.

2. Matthews Hypes Trump as an ‘Active Volcano’ Whose ‘Competence’ Is ‘In Question’

Matthews opened the show by declaring Trump to be an “active volcano” in which the American people can imagine that, over inside “1600 Pennsylvania Avenue, you can imagine the lava sparks over the horizon.”

Behold the latest installment of irony emanating from the 7:00 p.m. Eastern hour on MSNBC.

“The President of the United States is said to be volcanic in his rage over a staff and administration that mocks, undercuts him the moment he leaves their sight. Instead of protecting him, it’s the country they protect from the man they signed onto serve,” Matthews added.

The pundit explained that the President has now risen “to heights of fury and some say derangement and this is the level of fear and mistrust inside the White House....[a]nd now with his very competence in question, President Trump's anger appears to be escalating.”

After introducing his first panel, Matthews screeched with more hyperbole:

It seems to me that the President's behavior is far more frightening to what’s going on in universe, in our country, our republic than somebody writing op-eds. People spend their whole lives without reading any op-eds in The New York Times quite happily. This President is talking treason. He’s saying that The Times should turn over the author, his identity or her identity to government. Like they committed some treasonous crime. What’s Trump talking about, government taking into captivity — into prison, basically this person who wrote this article.

Following up on his comparison hours earlier that the President is like a drug addict vomiting all over the place, Stephens complained to Matthews that “the 25th Amendment probably should have been invoked within three days of the Trump presidency being — of President Trump’s inauguration.”

Stephens then conceded that “the 25th Amendment is not going to be invoked, sad as that is” because of the support the President has from his cabinet, so all that’s left for the Resistance is that Trump will “either...be removed, I hope, because I believe he’s committed felonious acts and will be impeached and convicted in the Senate, but the only way that we’re going to be able to get rid of this presidency is by organizing a proper — proper political opposition to him.”

Taking a rare few moments to put The New York Times op-ed and the upcoming Bob Woodward book aside to cover the Kavanaugh hearing, Matthews took the same tract of The Times in seeing no problem with Obama nominee Elena Kagan (who refused to comment on hypotheticals) but seemingly infinite issues with Trump’s second Supreme Court pick.

Matthews lashed out in the first of two teases for his surprisingly tame segment with Democratic Senator Richard “Stolen Valor” Blumenthal (CT) by complaining that “Kavanaugh spent another day on Capitol Hill today avoiding answering tough questions” on topics like the Mueller probe where “the American public deserve to know where he stands on this.”

“Up next: Questions about abortion rights, presidential power, and, of course, the Mueller investigation itself are center stage in the third day of hearings for Supreme Court nominee Brett Kavanaugh. Are lawmakers being misled by Kavanaugh’s views on these key topics? He’s a slippery one, isn’t he,” Matthews stated in the other tease.

Before introducing Blumenthal and a slew of clips featuring Democratic Senators attempting to get under Kavanaugh’s skin, the MSNBC host shrieked that the D.C. Circuit Court of Appeals Judge “has been evasive, cagey, sometimes simply unresponsive when it comes to some of the most pressing issues.”