To put it simply, cable news thrives off of speculation and little discussion of the actual news. The Tuesday edition of MSNBC’s Hardball opened with a segment perfectly encapsulating this reality with the panel gaming out how a Trump impeachment could go down, what charges he’d face, and whether he’ll be found to have violated the Logan Act in the Russia probe.

It thankfully ended with pushback from Washington Post reporter and PBS’s Washington Week host Robert Costa, who implored host Chris Matthews to only deal in facts and what’s definitively known about the story.

Matthews highlighted how House Judiciary Committee ranking member Jerry Nadler (D-N.Y.) is “sitting over there as a constitutional expert with about 60 votes already for impeachment” and possibly more by year’s end. Thus, he wanted the panel to elaborate on “how they're going to receive these reports that we now hear are coming from Mueller, starting with an obstruction report.”

NBC News reporter Ken Dilanian fretted that “obstruction of justice is...a crime of intent, so unless there's some really shocking evidence that we haven't seen or heard about to date, it's going to be really difficult.”

Former federal prosecutor Joyce Vance seemed down on the likelihood of impeachment under this Congress, even if the obstruction question was answered with overwhelming evidence by Mueller. However, the election could change that and then it would “take action against the President.”

Former Ted Kennedy aide and Third Way’s Mieke Eoyang seemed more energized by this discussion like Matthews, bemoaning how “the last time we impeached a president it was about lying about something that was actually not a crime at all” while this time involves a “cover up...from getting to the bottom of whether or not a hostile foreign power was trying to influence our election.”

Prior to a commercial break, Matthews went even further into speculation, claiming with zero evidence “[t]hat Trump sometimes got the word about the time of during the transition” that he, along with Michael Flynn, Rick Gates, and Paul Manafort, violated the Logan Act by “negotiat[ing] with foreign powers when you're not in office.”

Matthews added that this would explain Trump’s behavior and spell even more trouble beyond obstruction of justice.

Like a true liberal activist instead of a reporter, Dilanian agreed but when Matthews asked Costa, the former National Review editor hit back: “You can’t — my whole thing is listen to that, with all respect, you can't speculate. We just got to report it out. Report it out. We don't know. Can't speculate.”

To see the relevant transcript from MSNBC’s Hardball on April 4, click “expand.” 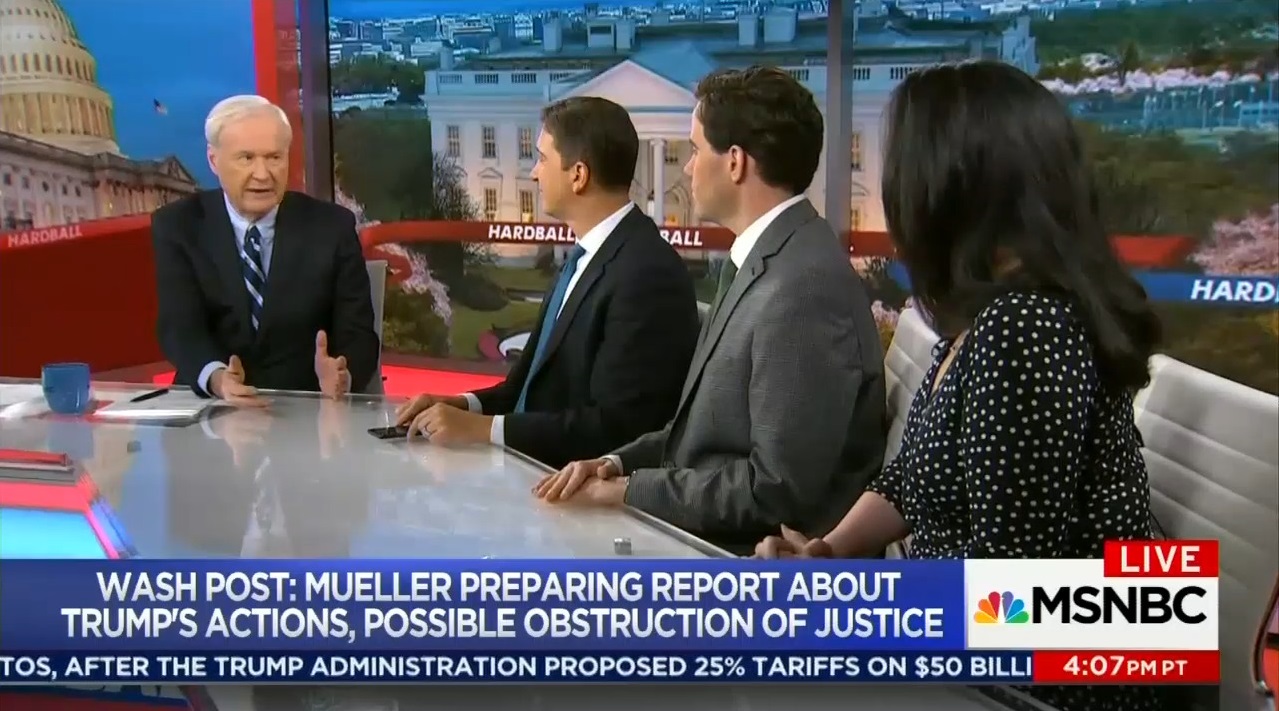 CHRIS MATTHEWS: Well, Jerry Nadler is the ranking Democrat on the House Judiciary Committee. He’s sitting over there as a constitutional expert with about 60 votes already for impeachment. Black caucus members, other progressive members out there who are all ready to do this thing, right? So, tell us how they're going to receive these reports that we now hear are coming from Mueller, starting with an obstruction report.

KEN DILANIAN: Well, the problem — yeah, the problem with obstruction of justice is, as Robert’s said, it’s a crime of intent, so unless there's some really shocking evidence that we haven't seen or heard about to date, it's going to be really difficult, I think, to prove that, you know, to the sufficiency that would rise to the level of impeachment, right? Because so far, we've seen where he's told — you know — asked for investigations, asked Comey to drop the investigation.

MATTHEWS: I'm with you on that. I think if — you know if he fires Comey, let me go back to Joyce on this. We know he fired Comey. We know he tried to protect Michael Flynn with Comey. We know — it's all public now. If that's all they've got, then it opens the question was he obstructing justice in such a public way using his constitutional powers publicly? Is that impeachable?

MATTHEWS: And it's to you.

MATTHEWS: Right now, it's to you.

VANCE: — yeah and obstruction you can be charged with in criminal courts, but how Congress deems an impeachable act is very different. It’s left up to their sound discretion. What we've seen so far from this Congress is they have not been impressed with the publicly available information about the President's conduct. There's been no outrage. There's been no calls to bring the President to heel or hold him accountable. So the issue that we'll have is whether Mueller's report, if it reaches Congress through Rosenstein's office, whether that will contain additional facts that will sufficiently agitate this Congress or a future one after the November elections and cause them to take action against the President. It’s still up in the air depending on the facts.

MATTHEWS: Mieke — that’s well said. Mieke, it's pending right now because if you figure the Democrats pick up 40 seats if they have a good year and they come in with a substantial majority over 218, that would allow a couple conservatives or moderates to not go with them but still get to 218. But do they — does it make sense they could impeach a President and take him to trial in the Senate on just obstruction or do they need something collusion with working, conspiring with the Russians?

MIEKE EOYANG: So, I don't think it's necessary the underlying is actually a crime here. Remember, the last time we impeached a president it was about lying about something that was actually not a crime at all. And so in the political realm, it's this question of, like, what is the truthfulness of the President? Can you trust him? Is he, in fact, abusing his office in a way that loses him the trust of the people.

MATTHEWS: Well, did you think the last impeachment was abusing the constitutional authority of the House of Representatives? Most people do.

MATTHEWS: Yeah, well, let's talk about what legitimately would look like an impeachable offense.

EOYANG: So, what we’re talking about here is not trying to cover up an affair but trying to cover up and prevent people from getting to the bottom of whether or not a hostile foreign power was trying to influence our election. That is a very different and much more serious matter that goes to the heart of our democracy.

MATTHEWS: Just remember, though, the Nixon case, Nixon, we've never been able to prove that he called for the Watergate break-in. But I did a lot of the reporting on that, later on, a lot of it. He ordered the break-in of the Brookings Institution, it's all on tape, he ordered the break-in of the Republican headquarters so he could say that the Democrats who did it. You know, his pattern was clear.

DILANIAN: And he ordered the cover-up, Chris.

MATTHEWS: Well, no, well, I’m saying — no, but I’m questioning — well, I’ll go back to you. You want to be the hot hand here. Is cover-up enough you? Is obstruction enough? Or do you have to get this through the House of Representatives under either party, do you have to have evidence of participation in the conspiracy to work with the Russians to get elected president?

DILANIAN: Well, with Nixon you had him actually ordering agencies of the federal government to the quash an investigation. I mean, right? We haven’t seen proof of that with Donald Trump. If we see proof of that, it could be enough, I think. 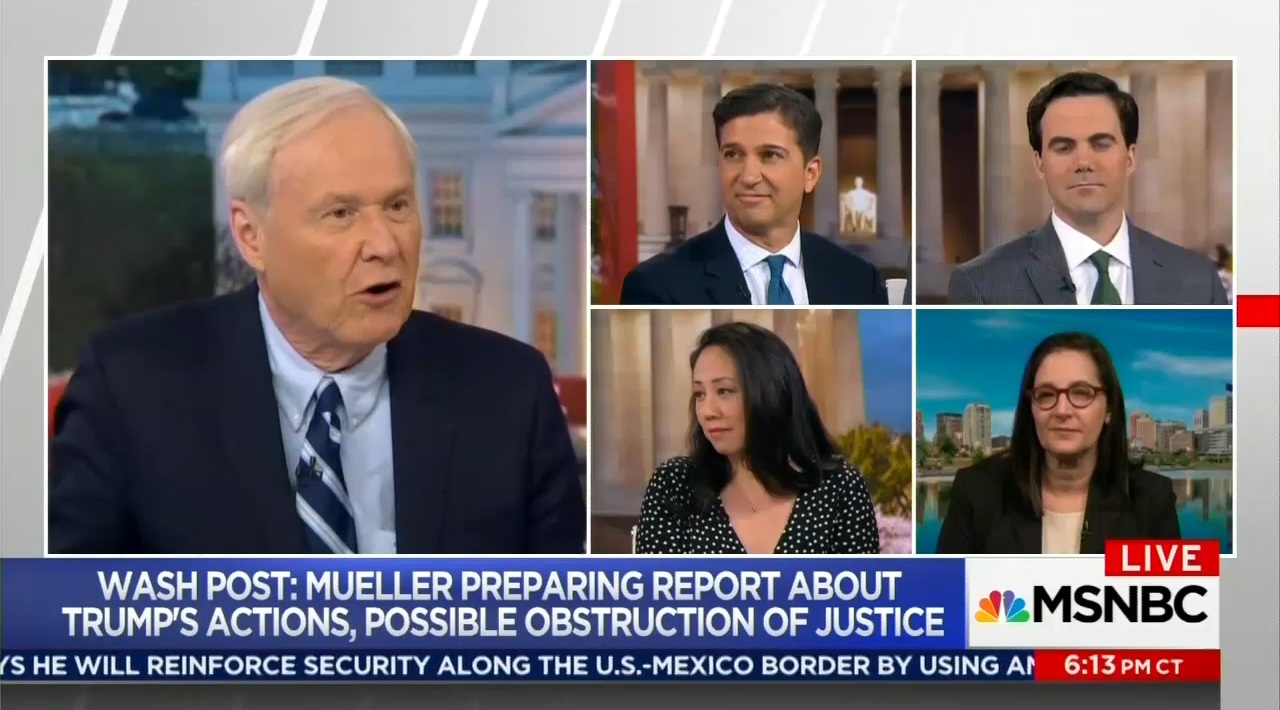 MATTHEWS: You know what I've thought from early on? That Trump sometime got the word about the time of during the transition. There's something called the Logan Act. You're not allowed to negotiate with foreign powers when you're not in office and he began to get concerned, hey, I've been doing stuff like that and began to cover it up and worry about what Flynn knew and what Manafort knew and Gates knew and began to behave in a way he obstructed justice because he is afraid he broke the Logan Act which hasn't been enforced since, what, the flood under Noah. I mean, when did this they ever enforce that law? But I think could he be — could that explain his behavior?

MATTHEWS: So afraid of — afraid of indictment for the Logan Act?

DILANIAN: It's very possible. Look, there was an orchestrated campaign to sort of undermine Obama's foreign policy with the Russians and others, but I think we need to take a step back and realize here the sad state of affairs we're in. This President has been under investigation that we know about since last June. This isn't a new notion that he's the subject of the investigation. He's relieved that he's the target. You know, Chuck Rosenberger, former federal prosecutor, said that's like the difference between getting hit by a bus and getting hit a car, you know? You could survive maybe a hit by a car being the subject. Target? You're definitely going be indicted. But it’s not reason to celebrate.

MATTHEWS: Okay, Robert, you are — Robert, please answer my question. Are they afraid of having violated the law and does that make a lot —

MATTHEWS: That's your job, keep it up.

COSTA: And we will.

MATTHEWS: Thank you, Robert. Great reporting. We're feeding off you all the time. The Washington Post, New York Times been doing fabulous work, of course.