Awkward: Lauer Congrats Farrow for Weinstein Bombshell He Worked on ‘For NBC News’

Amidst the NBC News controversy of declining to support contributor Ronan Farrow’s bombshell story on Harvey Weinstein, NBC’s Today co-host Matt Lauer praised Farrow on Wednesday for working on it at NBC but failing to disclose the network’s refusal to publish it (hence why it went to The New Yorker).

Lauer welcomed Farrow on as “a contributor for The New Yorker and an NBC News contributing correspondent” then praised him as having “been working this story for a long time, both for NBC News and The New Yorker.”

While it’s true that Farrow worked on the story at NBC, it’s misleading to leave it at that. NBC did not publish the story and it was due to their assessment that it was not publishable (along with whatever other excuses they wanted to concoct).

Here’s Farrow on Tuesday’s Rachel Maddow Show explaining his side of the story:

Look, you would have to ask NBC and NBC executives about the details of that story. I'm not going to comment on any news organization's story that they, you know, did or didn't run. I will say that over many years, many news organizations have circled this story and faced a great deal of pressure in doing so...In the course of this reporting, I was threatened with a lawsuit personally by Mr. Weinstein and, you know, we've already seen that The Times has been publicly threatened with a suit. I don't want to describe any suits leveled at other organizations that I work with, but, you know, certainly this is a considerable amount of pressure that outlets get as well.

He also told Maddow that The New Yorker was actually receptive to the story as he walked in the door there “with an explosively reportable piece that should have been public earlier and immediately, obviously The New Yorker recognized that and it is not accurate to say that it was not reportable.”

“In fact, there were multiple determinations that it was reportable at NBC,” Farrow concluded with the proverbial mic drop.

Throw in the CNN Money story published by Brian Stelter and you have NBC with yet another scandal involving questionable news judgement (e.g. GM trucks, George Zimmerman 911 call, Brian Williams to name a few others).

With that in mind, Lauer’s words here to Farrow rung hollow: “I know it has been a long and difficult process to get these actresses to be identified and go on the record with their allegations. After so many people have been chasing this for so long, why do you think they are now coming forward?”

Utterly despicable. But what do you expect from a liberal network with a track record like NBC’s.

Here’s the relevant transcript from NBC’s Today on October 11:

MATT LAUER: Ronan Farrow is a contributor for The New Yorker and an NBC News contributing correspondent, as well. Ronan, good morning to you. 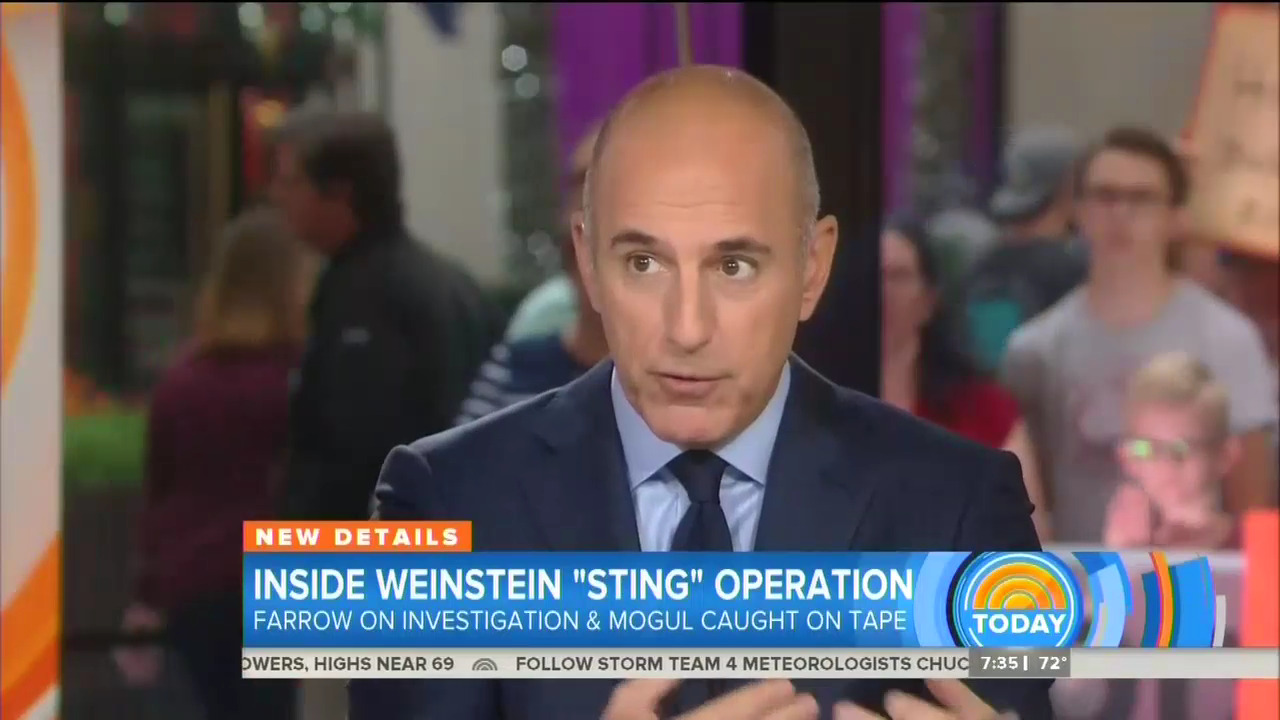 LAUER: You’ve been working this story for a long time, both for NBC News and The New Yorker. I know it has been a long and difficult process to get these actresses to be identified and go on the record with their allegations. After so many people have been chasing this for so long, why do you think they are now coming forward?

FARROW: Look, each of these sources really tore their guts out giving these horrifying details. This was a traumatic experience to relive these events, and there’s very little upside for them. You know, this was a brave and important thing they did. And they did it because they thought it could prevent, potentially, future crimes. Again and again, sources talked about doing that because they felt there was a change in the culture, that there was more of a culture of accountability now.

SAVANNAH GUTHRIE: That there was a moment for them to tell the story. And you speak to so many women in your story and it’s across decades and it’s different women, and in some cases it’s across continents. And yet, what you report is such a striking M.O., similarities in the story.

FARROW: And the women themselves use that phrase, Modus Operandi. Again and again, the same uncanny details.

HODA KOTB: Well, you’re also hearing about a lot of people were accusing him of harassment, but there were three actresses who accused him of forcible rape.

FARROW: That’s right, Hoda. And obviously those are allegations that are a new level of seriousness. And you know, those women especially today, very brave and very re-traumatizing thing. And look, I want to highlight something else. Asia Argento, the Italian actress who had one of those rape allegations, is one of several stories in here where she talked about going back to him afterwards. And that is a facet of many sexual assault cases.

LAUER: As you track this down, I want to read a statement from a spokesperson for Harvey Weinstein and I want you’re reaction to it. This is from Sallie Hofmeister, who says, “Any allegations of non-consensual sex are unequivocally denied by Mr. Weinstein. Mr. Weinstein has further confirmed that there were never any acts of retaliation against any women for refusing his advances. Mr. Weinstein obviously can’t speak to anonymous allegations, but with respect to any women who have made allegations on the record, Mr. Weinstein believes that all of these relationships are consensual.”

FARROW: And clearly this is a New Yorker article, he had a very full and fair opportunity to engage in and respond to this piece. That statement is in the text of our article. You know, look, he says this was all consensual. He says he never retaliated against women. And the women themselves, over and over again, tell a very different story, Matt. 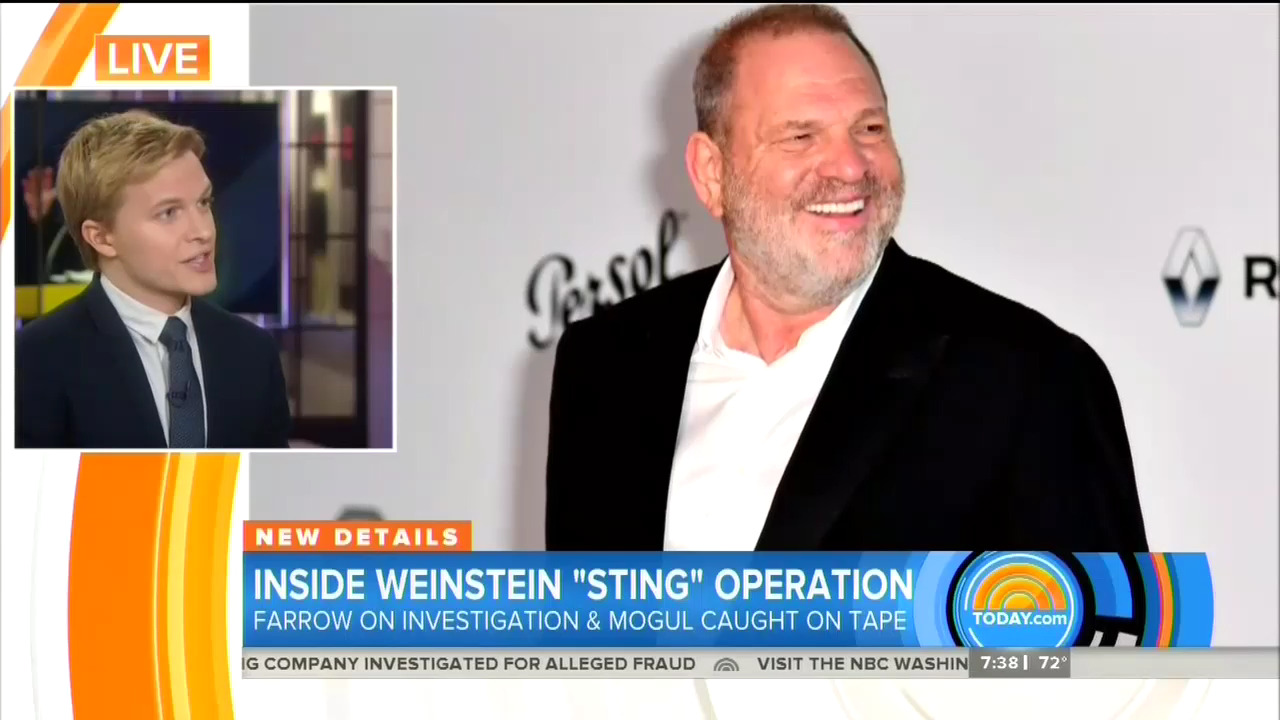 FARROW: So there are 16 former and current employees in this article, many of them are quoted at length. And they talked about feeling profound guilt at having in some cases felt they aided and abetted a pattern of company meetings that they thought were little more than cover for predatory advances on vulnerable women.

FARROW: Thank you, Matt. Good to be here.