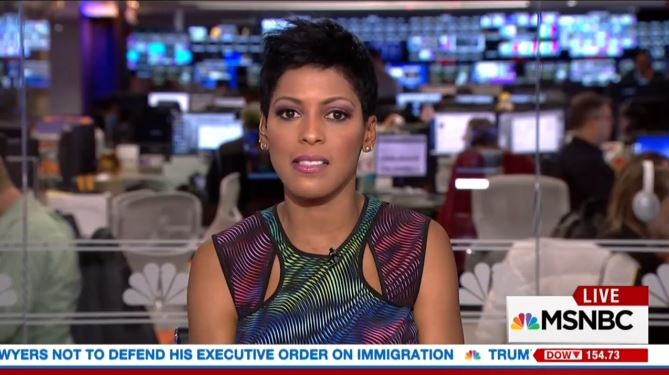 In a statement released on Wednesday, the National Association of Black Journalists (NABJ) demanded a meeting with NBC News to explain why its “whitewashing” their network (and cable partner MSNBC) by replacing Tamron Hall in the third hour of Today to make space for Megyn Kelly starting in the fall.

Hall’s final day was Tuesday and NBC explained that while they “hoped that she would decide to stay,” it also “disappointed” them “that she has chosen to leave” without having a chance offer an on-air goodbye on NBC or to her 11:00 a.m. Eastern audience on MSNBC.

“She broke ground as the first black female (Today) cohost and was enjoying ratings success...NBC has been a leader for diversity in broadcasting, but recent reports that Hall and Roker will be replaced by former Fox News anchor Megyn Kelly are being seen by industry professionals as whitewashing,” fretted the NABJ in their statement.

Not surprisingly, the NABJ is not pleased with Kelly (mostly due to the simple fact that she’s from Fox News) and thus wants an explanation of why the changes were made:

Kelly has a well-documented history of offensive remarks regarding people of color. On The Kelly File, her Fox News show, the host said then-First Lady Michelle Obama's commencement address at Tuskegee University pandered to a "culture of victimization."

While NABJ wishes Hall well on her next move, NABJ requests a meeting with NBC leadership on the top-rated show's dismantling. We look forward to dialogue and resolve regarding black journalists and their continuing roles at NBC both in front and behind the camera.

Essence.com’s Paula Rogo also expressed dismay, opining that the shake-up “is more than disappointing, since the two most prominent black faces on the show are losing out to accommodate a white conservative with a history of questionable rhetoric with regard to race relations in America” (read: not a liberal).

Rogo went as far as to accuse Kelly of being “racially insensitive”:

It is also key to note who Hall and Roker are losing their airtime to as a result of this sudden change in the Today...line up. Megyn Kelly was a prominent face at Fox News, where she brought a well-documented track record of racially insensitive comments that included blaming Sandra Bland for her own death and referring to former First Lady Michelle Obama as a "whiner" for speaking out about racism.

Ironically, the issue of diversity at the liberal network arose back in July 2010 in a piece written by now-Washington Free Beacon writer Lachlan Markay noticed when he was part of NewsBusters.

According to Markay’s story, MSNBC altered the banner of their Website to include Hall after a previous collage of network personalities was entirely white.

Tamron first joined MSNBC almost ten years ago and became most known for hosting NewsNation. Later, she became a part of NBC News, filling-in on both Today and NBC Nightly News as well as joining the third hour of Today in 2014.

Throughout her career, she’s had a slew of biased moments. I perused the vast NewsBusters archives and I came up with a few:

- June 2010: Smeared Carly Fiorina as if she were a character in “the Linsday Lohan movie, Mean Girls”
- February 2012: Decried the use of the military as pawns while taping a “Lean Forward” promo in front of a military jet
- May 2012: Conservative writer Tim Carney had his microphone cut because he attacked MSNBC’s “ridiculous” coverage harping on bullying rumors about a young Mitt Romney and knocking the war on women as “silly”
- August 2015: Hall complained on Today that, concerning Jon Stewart’s departure from The Daily Show, “the saddest thing about this is that the Republican first debate is Thursday night, so we don't have Jon Stewart Friday.”
- October 2015: An enraged MSNBC host lashed out at American Conservative Union (ACU) president Matt Schlapp for bringing up how “Hillary Clinton stole furniture from the White House when she left” in 2000
- September 2016: Classified the Miss Universe controversy as a “substantive” campaign story