On Tuesday night’s Kelly File, one of the 2016 election’s more seminal moments ensued as Fox News Channel (FNC) host Megyn Kelly clashed with former Republican House Speaker Newt Gingrich over coverage of Hillary Clinton many scandals and allegations of sexual misconduct against Donald Trump that included Gingrich attacking Kelly as being “fascinated with sex” and not concerned with policy matters.

The exchange went on for a number of minutes before it concluded with Gingrich telling Kelly that she wants to see Bill Clinton back in the White House as a “sexual predator” while Kelly suggested that a fiery Gingrich “take your anger issues and spend some time working on them.”

Moments after an interview with Mike Pence in which Pence cited the latest study by my colleague Rich Noyes, the Kelly-Gingrich exchange began escalating when Kelly chartered Hillary Clinton’s cratering poll numbers around her fainting episode on September 11 to their rise when the media (and Trump) seized on the Alicia Machado and Access Hollywood controversies.

Gingrich responded with an excellent study by The Hill’s Joe Concha about the major broadcast networks spending “23 minutes attacking Donald Trump that night and 57 seconds on Hillary Clinton's secret speeches” on October 13, but Kelly started to state a hypothetical and the segment flew off the rails:

KELLY: If Trump is a sexual predator, that is —

GINGRICH: He's not a sexual predator. You can’t say that. You cannot defend that statement.

GINGRICH: You cannot defend that statement. Now, I'm sick and tired of people like you using language that's inflammatory that's not true. Doanld Trump was not —

KELLY: Excuse me, Mr. Speaker, you have no idea whether it's true or not.

GINGRICH: — and neither do you.

KELLY: That’s right and I'm not taking a position on it, unlike you.

GINGRICH: Yes you are. When you used the words you took a position and I think that it's unfair of you to do that, Megyn. I think that is exactly the bias people are upset by.

KELLY: I think your defensiveness on this may speak volumes sir.

Kelly was finally able to take back control and finished explaining her point:

What I said is if Trump is a sexual predator, then it's a big story and what we saw on that tape was Trump himself saying he likes to grab women by the genitals and kiss them against their will. That’s what we saw then we saw ten women come forward after he denied actually doing it at a debate tp say that was untrue, he did it to me, he did it to me, we saw reporters, we saw people who worked with him, people from Apprentice and so on and so worth. He denies it all which is his right. We don't know what the truth is. My point to you is as a media story, we don't get to say the ten women are lying. We have to cover that story, sir.

Gingrich re-upped the numbers by Concha raising legitimate concerns about media bias and when Kelly informed the Trump backer that she has discussed Clinton scandals on her show, he said this: “And you want to go back through the tapes of your show recently? You are fascinated with sex and you don't care about public policy. And that's what I get out of watching you tonight.”

A visibly shocked Kelly responded that she’s “not fascinat[ed] by sex but I am fascinated by the protection of women and understanding what we're getting in the Oval Office and I think the American voters would like to know” what’s in the past of the man hoping to defeat Hillary Clinton on November 8.

Before I give way to the reminder of the eyebrow-raising verbal brawl, here’s an exit question: Who do you think had the better argument? Or was it a draw? Does Gingrich have a point about the coverage of Trump allegations? Or did Megyn Kelly with her emphasis that voters deserve to hear any and all stories about the candidates?

Without any further adieu, the conclusion of the Kelly-Gingrich feud from FNC’s The Kelly File on October 25 is transcribed below. 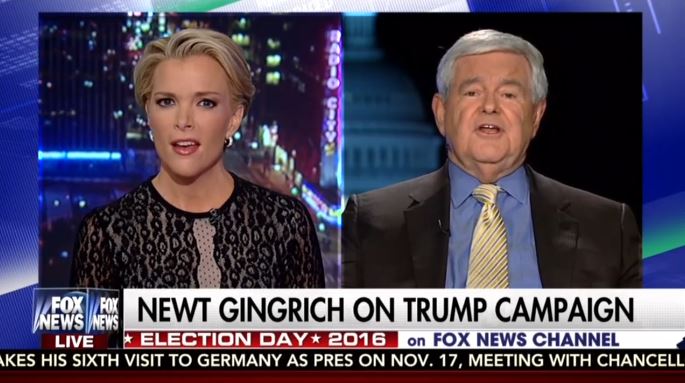 NEWT GINGRICH: And therefore, we’re going to send Bill Clinton back to the East Wing because after all, you're worried about the sexual predators.

MEGYN KELLY: Yeah, listen, it’s not about me. It's about the women and men in America and the poll numbers show us that the women of America are very concerned about these allegations and in large part believe that they are a real issue and don’t dismiss the women, sir.

KELLY: We on The Kelly File have covered that story as well, sir. I will tell you the polls.

GINGRICH: — disbarred by the Arkansas bar.

KELLY: Excuse me, sir. We on The Kelly File have covered the Clinton matter as well. We've hosted Kathleen Willey, 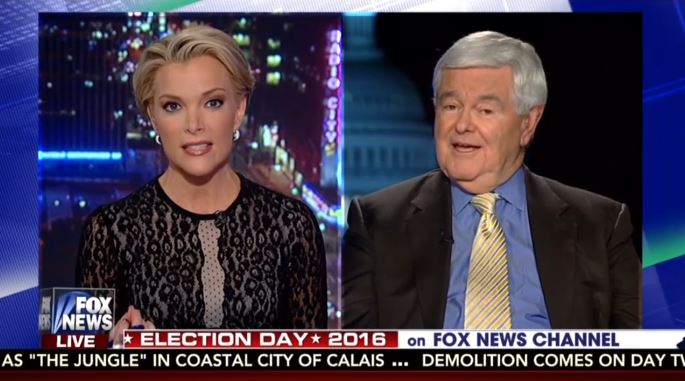 KELLY: We’ve covered the examples of him being accused as well but he's not on the ticket and the polls also show that the American public is less interested —

GINGRICH: He'll be in the East Wing —

KELLY: — in the deeds of Hillary Clinton's husband than they are in the deeds of the man who asked us to make his president, Donald Trump. We're going to have to leave it at that and you can take your anger issues and spend some time working on them, Mr. Speaker. Thanks for being here.

GINGRICH: And you — and you too, Megyn.