Editor’s Note, 10:33 p.m. Eastern: This post has been updated to include a second reference by Clinton for help from “fact-checkers.”

On at least two occasions during Monday’s presidential debate between Donald Trump and Hillary Clinton, the Democratic nominee was tangling with Trump on her inability to produce any tangible results on fighting ISIS and foreign interventions when Clinton implored her friends in the liberal media and especially “the fact-checkers” to “get to work” on Trump.

Trump was being interrupted by moderator and NBC Nightly News anchor Lester Holt to move onto the next portion of the debate when he implored the audience to “take a look at her website [where] she's going to raise taxes $1.3 trillion” and “telling us how to fight ISIS” which “I don't think General Douglas MacArthur would like that too much.”

After Trump made the argument that Clinton has declined to go beyond online policy plans that may or may not work, Clinton shot back that “[a]t least I have a plan to fight ISIS” and Trump responded that “you're telling the enemy everything I want to do.”

“See, you telling the enemy everything you want to do. No wonder you've, fighting — no wonder you've been fighting ISIS your entire adult life,” Trump concluded.

Stammering to a degree, Clinton raised a finger and reached out to the media and their beloved colleagues who often go by the title of fact-checker: “That's a — go to the — please, the fact checkers, get to work.”

Moving to the second instance, the candidates were debating whether or not Trump supported the second war in Iraq and Clinton’s record on Libya when the former secretary of state declared: “Well, I hope the fact-checkers are turned upping — turning up the volume and really working hard. Donald supported the invasion of Iraq.”

Trump repeatedly began shouting “wrong” as Clinton ruled that Trump’s support “is absolutely proven over and over again” and “actually advocated for the actions we took in Libya.”

As NewsBusters has extensively written about over the past week, the media’s implored themselves as an industry to instantly fact-check the candidates (read: Trump) more often and for Holt (plus those following him) to during the debate.

When it comes to being a liberal, you don’t have to look any further than the people covering your for help in trading talking points. For Clinton, the back-and-forth with Trump built up to a plea for the media to bail her out. We shall see following the debate if the media does so when reviewing this portion.

The relevant portion of the transcript from the first presidential debate on September 26 can be found below.

DONALD TRUMP: Could I just finish that? I think I should.

TRUMP: You go to her website and you take a look at her website, she's going to raise taxes $1.3 trillion.

HOLT: The next segment will continue on the subject of —

HILLARY CLINTON: At least I have a plan to fight ISIS. 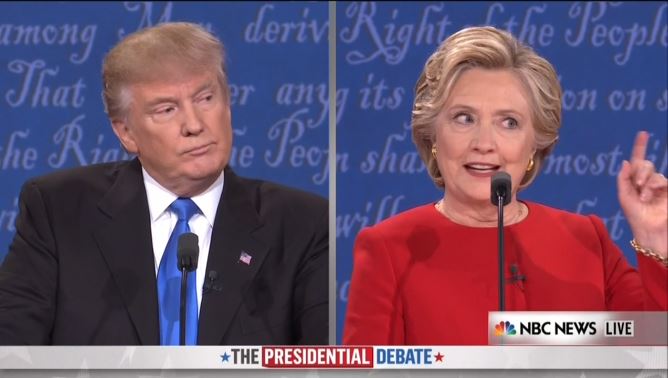 TRUMP: No, no, you're telling the enemy everything I want to do.

TRUMP: See, you telling the enemy everything you want to do. No wonder you've, fighting — no wonder you've been fighting ISIS your entire adult life.

CLINTON: That's a — go to the — please, the fact checkers, get to work.

HOLT: Folks, you are unpacking a lot here and we're still on the issue of achieving prosperity.