When a lone protester from the anti-American, far-left group Code Pink tried to make noise in the crowd at the Republican National Convention (RNC) on Tuesday night, the “big three” networks of ABC, CBS, and NBC tag-teamed with MSNBC to spent nearly six minutes showing and discussing the “scrappy” protester.

ABC led the way with two minutes and 14 seconds hyping and/or showing the protester jostle with delegates and security as chief anchor and Clinton Foundation donor George Stephanopoulos intently interested in the protester’s actions. This then gave way to chief foreign correspondent Terry Moran chiding the RNC for “another remarkable breach of security.”

After describing how much identification he has to show to reach the floor, Moran boasted how “we have now had several demonstrations” but were dissolved without delegates possessing “anger” or “menace” in the way that Trump rally attendees would.

Stephanopoulos agreed about there being “far more graphic violent scenes at those Trump rallies during the campaign” while also giving a play-by-play like a boxing announcer of the RNC delegates covering her in American flags and security attempting to pry her away.

Liberal commentator Cokie Roberts offered her thoughts on Code Pink before making sure to declare that “[t]hey protest against Democrats as well and she could have been a delegate for all we know going on the floor.”

Before moving on, chief White House correspondent Jonathan Karl used the scuffle to observe the number of empty seats off the immediate convention floor in the stands as something that won’t please Donald Trump.

Brief but still positive in their platitudes was MSNBC during their 53 seconds with co-hosts Brian Williams and Rachel Maddow touting her as “scrappy” before moving onto the speaker schedule. 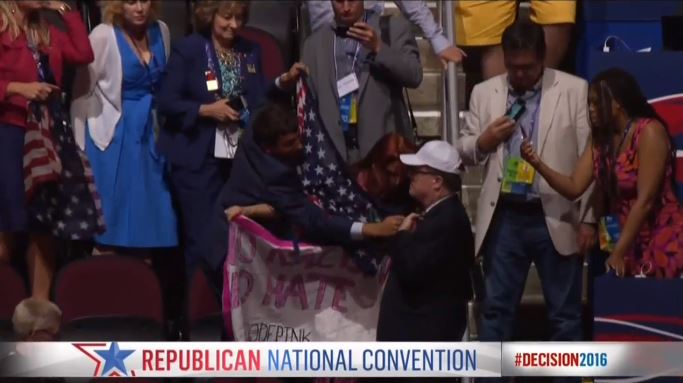 On their parent network NBC, NBC Nightly News anchor Lester Holt seemed confused at who the protester was as he seemed to think that the disturbance involved anti-Trump activists before Today co-host Savannah Guthrie corrected him:

LESTER HOLT: And looks like a protest of some sort has broken out on the floor. We're told involving anti-Trump folks here, and there's the camera trying to look up into the stands. I’m trying to get a sense of where this — there you go.

SAVANNAH GUTHRIE: That's Code Pink. That is a well-known progressive protest movement. That's actually — yes, it’s an Anti-Donald Trump but does not appear to be Republican activists, and I guess that's a picture from moments ago.

Finally, CBS discussed the protester for one minute and 21 seconds, but the low-life attention-seeker was granted a grand total of two minutes and three seconds when adding in time that she was shown on screen.

CBS Evening News anchor Scott Pelley acknowledged the scene but used it to highlight how “the fears of unrest...have so far been unfounded” to which Face the Nation host John Dickerson added:

Yeah, I'm watching this single protester who has a pink flag. It says No racism, No hate and she's been covered by various American flags from conventiongoers here, were trying to block her out as you mentioned. It’s like last night's single protest, getting a little attention. Some people tussling with her, the flag she has brought, but trying to find a way to get her out of the hall, but otherwise there is a lot of milling around in this interregnum here.