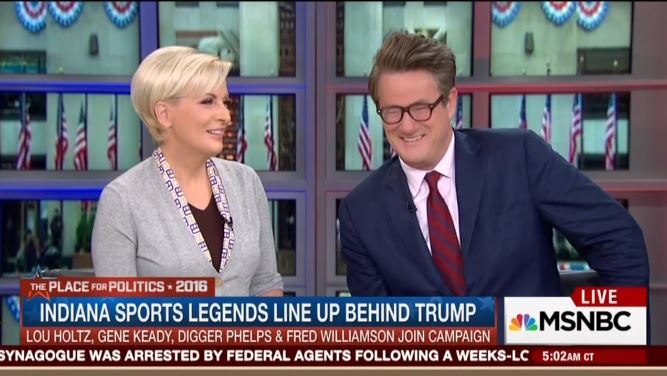 In a fantastic piece that it’s highly recommended for news junkies and those interested in the media, National Review senior editor Jonah Goldberg took on MSNBC’s Morning Joe and their infatuation with Donald Trump as “unwatchable” and full of “condescending snootiness” that rivals the cast of Mean Girls.

Goldberg made it clear that he was a frequent viewer of the panel-centric show for some time because it doesn’t harp on viral videos and Facebook posts that you see elsewhere (hint, hint ABC’s Good Morning America) and gave him an idea of what the left was up to, but their Trump worship has led to “insufferable gloating” by co-hosts Joe Scarborough and Mika Brzezinski.

“When it comes to the presidential race, the set of Morning Joe increasingly resembles the mean-girls table at the high-school cafeteria,” he explained.

Summarizing Brzezinski’s reactions to any criticism of Trump “include eye rolls, poses of shock and disgust, and sarcastic bewilderment” while Scarborough “loves to rehearse all the past times people said Trump was doomed and pretend in mock seriousness that this time he really is toast.”

The Fox News contributor noted that the pair seem to take personal offense to any (categorically true) suggestion that they’re “in the tank from Trump,” Goldberg used his excellent diction and wit to succinctly dismantle the trio whose show is beloved by Washington insiders that’s acted as a “great gift to Trump”:

By constantly pushing the narrative that Trump is unstoppable, that he’s “in a different league,” that he’s inevitable and on the right side of history, and, most importantly, that substantive criticisms of Trump just don’t matter, Morning Joe (and a great many others in the media) has been making in-kind donations to his campaign. The Morning Joe crowd and others hide behind their transitory and evanescent criticisms of Trump as proof they are being objective, all the while insisting that such criticisms are irrelevant because Trump is the fleshy manifestation of an Idea Whose Time Has Come.

Thus, any efforts or stratagems designed to stop Trump are the stuff of desperate establishmentarians and incompetent hacks.

Footnoting why he penned the post, Goldberg recalled how Tuesday’s show featured an attack on Cruz for calmly and respectful engaging with a group of rude Trump followers (which our Mark Finkelstein chronicled here):

The mean girls were at their bitchiest today because Ted Cruz dared to go out and talk to some Trump-supporting protestors. Mika was making faces and shaking her head over the whole episode the way a high-school Queen Bee might when the bespectacled president of the knitting club stands up to make an announcement at lunchtime. Scarborough literally succumbed to a giggle fit. Did Cruz really think he could persuade the Trump supporter? How could he think this was a good idea?

Goldberg gave his thoughts on the Cruz exchange before concluding that the double standard is clear as day because the pair and their assorted friends would be giving “rapturous applause” for any instance where Trump engaged in a debate with Cruz supporters.

Again, be sure to read the full post from Goldberg here.