CNN host and liberal columnist Fareed Zakaria opened his eponymous Sunday talk show by rekindling the extremely flawed comparison made by the liberal media that 2016 GOP presidential candidate Donald Trump is similar to the conservative Barry Goldwater’s campaign against then-President Lyndon Johnson in 1964.

After claiming that more Republicans have come to terms with a Trump nomination, Zakaria hyped that “conservatives today are in somewhat the same position Republican moderates were in 1964 as Barry Goldwater streamed towards the Republican nomination.”

Citing liberal writer Geoffrey Kabasrevice’s book Rule and Ruin about the GOP, Zakaria lamented that the party of Lincoln and “progressive stance[s]” on civil rights had thrown it all away with Goldwater since the Arizona Senator “had opposed to the Supreme Court's decision to integrate schools in Brown v. Board of Education and the pivotal 1964 Civil Rights Act.”

In a brief aside, it’s important to note that Zakaria’s commentaries are sometimes word-for-word regurgitation of his weekly Washington Post column on the heels of what’s been a career marred by multiple allegations of plagiarism. The relevant piece that serves of the basis of his four-minute-and-10-second commentary can be found here.

Of course, what’s also significant here was that no context was provided as to what Goldwater actually thought about race and equality, so it leads viewers to draw the conclusion that Goldwater was a racist and pro-segregation (when he wasn’t).

He added that Trump’s breaks with the GOP on issues like foreign policy, spending, and trade arguably “marks, in many ways, a larger break from the past than Goldwater.”

Nonetheless, Zakaria continued promoting the comparisons between 2016 and 1964 in that the voters in November could shake up “the old order, perhaps without setting up a new one” with 1964 “shifting southern whites to the Republican Party” to the chagrin of “the establishment” because they “couldn't mustard the courage and unity to oppose Goldwater, too scared to push back against the energy and devotion of new populist forces.”

Along with distorting Goldwater’s policy positions, the whole argument that Trump is similar to Goldwater fails on other fronts. First and foremost, Trump has not held elected office of any kind while Goldwater had been part of the political system for decades. Prior to his presidential run in 1964, he first ran for local office in Phoenix in 1949 then elected to the U.S. Senate in 1964.

After losing to Johnson, Goldwater returned to the Senate and stayed there until his retirement in 1987. While he was a conservative and was the poplar opposite of liberal Republicans like Nelson Rockefeller, Goldwater played a role in lobbying President Richard Nixon to resign the presidency over the Watergate Scandal.

Unlike Trump’s ever-changing political views on issues ranging from 9/11 to abortion, Goldwater was famous for having given birth to the conservative movement (in part through Conscience of a Conservative) that would lead the groundswell to propel Ronald Reagan over the sitting President Jimmy Carter in 1980.

For those skeptical of what this writer has laid out, one should look no further than CNN’s airwaves three days earlier when liberal journalist and CNN political commentator Carl Bernstein demolished this premise on CNN Tonight that’s been widely promulgated by media types of all stripes.

The transcript of Zakaria’s commentary on CNN’s Fareed Zakaria GPS from March 20 can be found below. 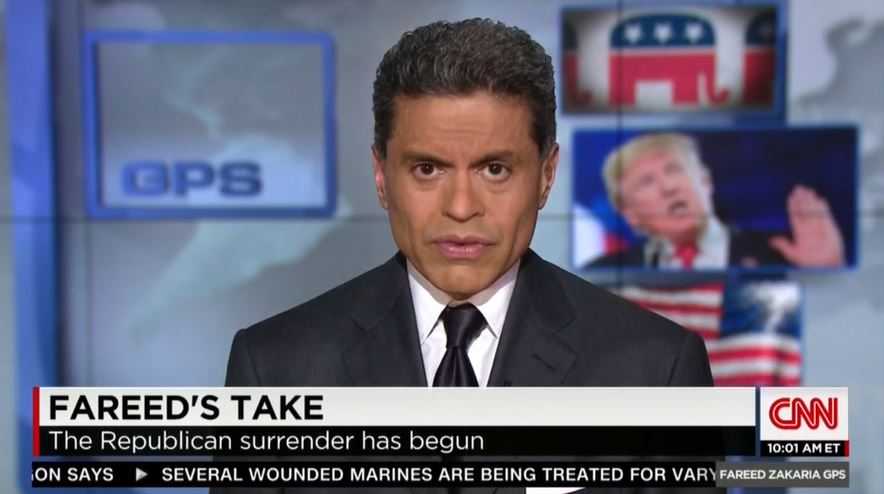 FAREED ZAKARIA: Here's my take. The Republican surrender has begun. Having described Donald Trump as an unacceptable, un-conservative, dangerous demagogue, the party establishment appears to be making its peace with the land who keeps winning primaries. The Wall Street Journal editorial page argued vociferously against Trump for months pointing out that he is huckster and a catastrophe warning that “if Donald Trump becomes the voice of conservatives, conservatism implodes with him.” Yet this week, it had a lead editorial urging Republicans to “continue to see if Mr. Trump can begin to act like a president...and above all to decide who can prevent another progressive-left presidency.” Marco Rubio has called Trump a “con artist” and compared him to “third world strongmen.” He has said Trump has “no ideas of any substance,” “has spent a career sticking it to working people” is trying to “prey on people's fears,” and “encourages” violence at his rallies, but he says he intends to support whoever emerges as the Republican nominee. So do John McCain and House Speaker Paul Ryan who has taken the rare step of intervening in the campaign three times to reprimand Trump for his ideas and rhetoric. Even Lindsey Graham, who has called Trump “the most unprepared person I’ve ever met to become commander and chief” will not explicitly say he will not vote for him. Indeed, there's one Republican senator has committed to not voting for Donald Trump. Ironically, conservatives today are in somewhat the same position Republican moderates were in 1964 as Barry Goldwater streamed towards the Republican nomination. It's difficult to understand today how dramatic a break that was for the Republicans. As Geoffrey Kabaservice documents in his illuminating book Rule and Ruin, the party had prided itself on its progressive stand on race from Abraham Lincoln onward. Goldwater, on the other hand, had opposed to the Supreme Court's decision to integrate schools in Brown v. Board of Education and the pivotal 1964 Civil Rights Act. A hundred years of Republican work on civil rights would be thrown away, the moderates felt, were they to nominate Goldwater. Trump marks in many ways a larger break from the past than Goldwater. The modern Republican Party has been devoted to free markets and free trade, social conservatism, an expansionist foreign policy, and fiscal discipline, especially on entitlements. Remember that the speech that launched Ronald Reagan's political career was an attack on Medicare.

RONALD REAGAN: To disguise a medical program as a humanitarian project. 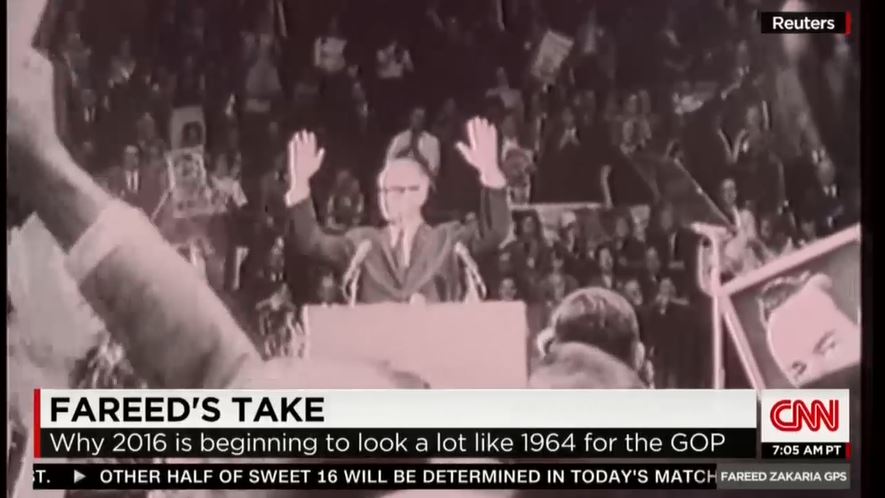 ZAKARIA: On every one of these issues, Donald Trump either openly disagrees or has, with abortion, a past track record of disagreement with conservatives. Over the decade, Republican support for immigration reform and free trade has already been collapsing, but Trump's nomination would transit form the party into a blue collar, populist nationalist movement with a racial. Much like others in the western world. This would be a very different party from Ronald Reagan's or Paul Ryan’s. 2016 might well go down as a critical election. One that scrambles the old order, perhaps without setting up a new one. In this respect, it looks like 1964. Also, an election that realigned politics shifting southern whites to the Republican Party ever since. Then too there was enormous energy, new voters, and a candidate that thrilled his supporters. Then too the establishment couldn't mustard the courage and unity to oppose Goldwater, too scared to push back against the energy and devotion of new populist forces. So instead, the Republican Party went to the polls in November divided and it lost 44 states.