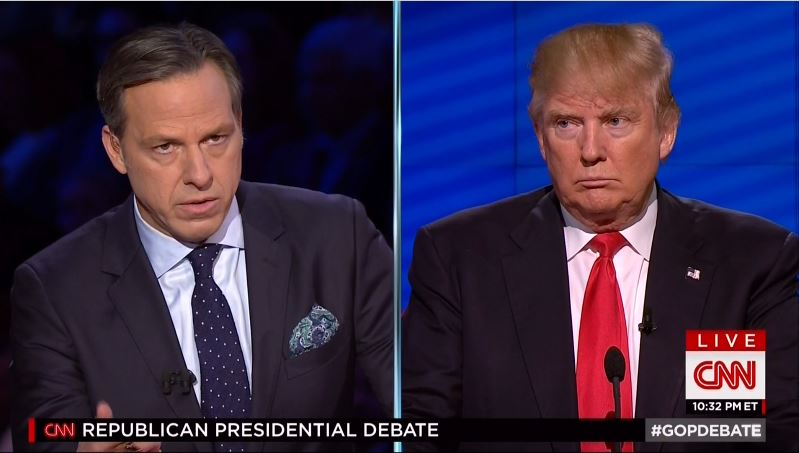 On Thursday night, CNN and its four moderators made no attempt to ask Republican presidential candidate Donald Trump and his three opponents about the purported incident Tuesday night involving Trump campaign manager Corey Lewandowski and Breitbart News reporter Michelle Fields that left Fields bruised on one of her arms.

The closest any of the moderators came to asking Trump about the deplorable situation was around the 10:32 p.m. Eastern mark when lead moderator and CNN anchor Jake Tapper attempted to press Trump on news that a supporter of his was arrested hours earlier for having sucker punched a protester at a Trump rally on Wednesday.

Before giving Ted Cruz, John Kasich, and Marco Rubio a chance to offer their reactions to the many incidents of violence at Trump events, here was the full question that Tapper posed to billionaire:

Earlier today, a man was arrested and charged with assault after sucker punching a protester in the face at your rally in Fayettville, North Carolina. This is hardly the first incident of violence breaking out at one of your rallies. Hillary Clinton, your potential general election opponent clearly indicated see sees this an issue for the campaign. She said, quote, “this kind of behavior is repugnant, we set the tones for our campaigns, we should encourage respect, not violence.” Do you believe you've done anything to create a tone where this kind of violence would be encouraged?

When Trump argued that the support his backers have shown for him has been “a beautiful thing” and deflected the idea of violence being acceptable due to the state of the country, Tapper followed with a slew of examples in which Trump painted a violent picture of wanting to assault protesters.

The main broadcast networks of ABC, CBS, and NBC largely remained silent on Lewandowski’s alleged actions toward a female reporter until Thursday when, as I chronicled earlier in the evening, they spent a combined two minutes and 18 seconds on what transpired.

Within this coverage, ABC’s World News Tonight featured an interview between Fields and Republican campaign correspondent/Sunday anchor Tom Llamas in which Fields explained how the ordeal has “been really hurtful because obviously, no one wants to be touched and violated like that.”