Even the New York Times sports section is full of crusaders. Reporter Billy Witz managed 2,700 words in Saturday's paper on how Oklahoma’s potential strict abortion law might lead to college softball moving its World Series from the state. Yes, he’s really reaching to create a controversy, to the point of confronting softball coaches at press conferences about the apparently burning issue (and being ignored).

In “Oklahoma’s Abortion Law Raises Questions About N.C.A.A.’s Softball World Series,”  Witz encouraged college softball to get into the abortion debate, though no legislation has passed yet, contingent on the Supreme Court overturning the Roe v. Wade decision.

But the deepening roots of Division I softball’s championship tournament, which has been played almost exclusively at this site since 1990, and the state of Oklahoma’s standing as the epicenter of the sport may soon be tested by an unlikely foe: politics over abortion rights.

….could have a widespread effect on college athletics -- potentially sidetracking the careers of athletes who are prohibited from having an abortion legally, influencing where athletes choose to attend school, and exposing some coaches, trainers and administrators to lawsuits for helping any athlete get an abortion.

The repercussions may be felt most acutely in Oklahoma, where Gov. Kevin Stitt last month signed a measure to prohibit nearly all abortions starting at fertilization, and allow private individuals to sue anyone who “aids or abets” an abortion.

A relocation because of abortion laws would certainly be greeted by opposition from some N.C.A.A. member schools, especially faith-based universities like Baylor, Brigham Young and Liberty….

Witz was disappointed softball coaches didn’t want to discuss abortion during a tournament.

How Roe v. Wade’s repeal might impact female college athletes was a topic that few participants in the softball World Series were interested in discussing. 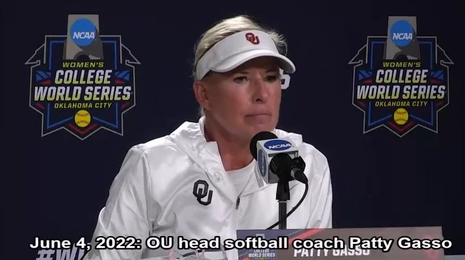 He singled out Oklahoma softball coach Patty Gasso, who deflected Witz's June 4 news conference question: “I was speaking with some parents that raised questions about the impending repeal of Roe v. Wade of, you know -- they may not necessarily be comfortable sending their daughters to places where there’s anti-abortion bills, like there is in Oklahoma.”

These are subjects upon which Gasso, whose team won its sixth national championship on Thursday by sweeping a best-of-three series from Texas, may have to get up to speed.

He indeed talked to players’ mothers, including one who “would not feel comfortable if her daughter attended school in a state that restricted” abortion. But what about the athlete herself? In Witz’s worldview, college athletes should be outspoken, but only from the left (or if their mother shares his own liberal viewpoint). Meanwhile, conservative coaches must be silenced:

Two years ago, Oklahoma was among the hubs where college athletes were making their voices heard after the murder of George Floyd. Oklahoma State’s star running back, Chuba Hubbard, publicly scolded his coach, Mike Gundy, when a photo surfaced of Gundy wearing a T-shirt promoting a right-wing TV network. And among the Oklahoma athletes raising their voices was Ashlynn Dunbar, a volleyball and basketball player who took to social media to tell fans not to cheer for her if they did not support her right to speak out.

The softball championships have been anchored in OKC for more than 30 years but the N.C.A.A has moved events out of South and North Carolina because of discriminatory policies. It’s unclear if college athletes will view abortion rights the way they have racism and mental health.

Yet for all Witz’s fawning over athletes “speaking out,” he didn’t respect their opinion when they wanted to actually compete. In September 2020, when the Big Ten announced it would play football despite Covid, Witz compared the college presidents to people who would let their own houses burn.