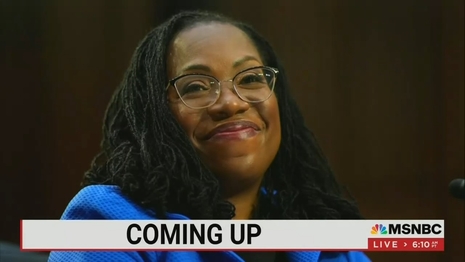 Even as Jackson stands on the precipice of victory, Hulse is still bitterly attacking committee Republicans for daring to question her record.

The three Republicans gave President Biden at least a modicum of the bipartisan backing he had hoped for ahead of a confirmation vote now expected as early as Thursday.

And it was a counterpoint to the bitterly partisan debate over Judge Jackson, in which Republicans on the judiciary panel attacked her as a liberal partisan with a questionable record, glossing over her qualifications and experience in hearings that featured the airing of conservative grievances, accusations of leniency toward child sexual abusers and divisive questions, including how she would define the word “woman.”

Hulse went looking for "prominent conservatives" to back up his side:

While they did not dispute the import of Judge Jackson’s nomination nor her legal qualifications, committee Republicans continued to rail against her on a variety of fronts, even as some prominent conservatives called their criticisms baseless. They criticized the sentences she handed down in child sex abuse cases, her refusal to state a personal judicial philosophy, her past representation of terrorism detainees as a public defender and her deep support among progressive advocacy groups.

Hulse hypocritically longed for the good old days when Congress reliably rubber-stamped a president’s Supreme Court nominees. (Does he not remember the treatment of the Republican-nominated Robert Bork, Clarence Thomas, and Brett Kavanaugh?) Sen. Lindsey Graham's opposition was terrible:

It was a mark of how bitterly divided the chamber has grown over approving Supreme Court nominees, once regarded by members of both parties as a matter of allowing the president his chosen candidate to serve on the court.

This time he didn’t defend Democratic treatment of Judge Brett Kavanaugh, but reached further back to ludicrously imply that Democrats sheathed their claws during the Clarence Thomas hearings.

Though Republicans complained about past Democratic treatment of Supreme Court nominees named by Republicans, Monday’s meeting was far different from the one Democrats held when they considered the nomination of Clarence Thomas in 1991, when Mr. Biden led the panel. At the time, rather than uniting against him en masse, Democrats agreed to send his nomination to the floor without a recommendation, despite their deep misgivings amid allegations of sexual harassment against the nominee. On Monday, Republicans refused to take a similar step, citing their view that Judge Jackson was too liberal.

At least Republicans stayed to vote against Jackson. The Democrats on the Judiciary Committee simply boycotted the vote for Trump nominee Judge Amy Coney Barrett in 2020.

After quoting Sen. Cory Booker questioning how anyone could question Jackson "who has done everything right in her life," Hulse also found "independent analysts" to back up the Democrats:

Democrats defended Judge Jackson’s record, noting -- in line with several independent analysts -- that her sentencing history has fallen well within the mainstream of the federal judiciary, and accusing Republicans and conservative groups of distorting her record….

Hulse not once but twice uses term “assault” to describe Republican criticism.

Democrats said the Republican assault was as much about the coming midterm elections as it was about Judge Jackson herself.