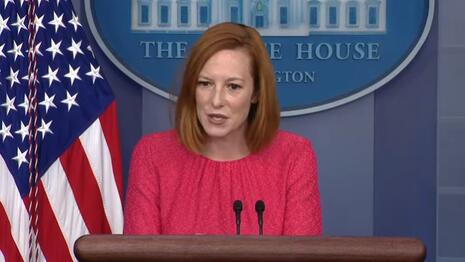 Grynbaum’s piece reeked of cringy attempts to be hip, down to the Instagram-ready opening line in which we learn that "political fame hits different” (i.e., has a different effect on one than it did previously) with bad man Trump off the scene.

Jen Psaki, President Biden’s press secretary, may be the most prominent spokeswoman in American politics, but political fame hits different in the post-Trump era.

But a cult of Psaki has proliferated online, where clips of her restrained, if occasionally withering exchanges with reporters have established this once obscure political strategist as an unlikely cultural force. Her retorts earn “yas queen” praise from liberals, while conservatives jeer her attempts at spin, particularly over the past month, when the confluence of the withdrawal from Afghanistan, extreme weather and coronavirus confusion meant the questions were more pointed and the answers more scrutinized.

Now the hashtag #jenpsaki has 139 million views on TikTok, and its pun of a cousin, #psakibomb (the P in Psaki is silent -- get it?), has racked up more than 13 million. She posed for Annie Leibovitz in Vogue magazine and answered questions on the NPR [game] show Wait Wait … Don’t Tell Me! Olivia Rodrigo stood next to her for a briefing. Her exchanges with a regular foil, the Fox News correspondent Peter Doocy, often get memed.

As the TikTok user “fabiantiktoks30sclub” put it, in a clip with 65,000 likes: “Yassss queen jen psaki let the clown doocey have it!!”

Crisp and precise in her answers, even if she does not always respond directly to a reporter’s questions, Ms. Psaki, in her speaking style, is a contrast to Mr. Biden and his circuitous folksiness. In interviews, Washington correspondents often used the word “professional” -- high praise in D.C. -- to describe interactions with her, deeming her straightforward, detail-dense briefings a relief after an era when Mr. Trump’s press secretaries repeatedly insulted, denigrated and frequently ignored journalists.

To be fair, the bar may be rather low.

“It’s a breath of fresh air to not have people personally attacked on a regular basis,” said April Ryan, a correspondent for The Grio who has covered White House press briefings since the 1990s and received her own share of vitriol from the Trump administration.

It's not surprising that a Democrat partisan like Ryan would approve. Grynbaum briefly noted critics “on the right,” but strove to neutralize their criticisms of the White House press corps, using Psaki herself.

Not surprisingly, she has her share of detractors, especially on the right.

“I walked into the lion’s den every day -- she walks into a bunch of kittens,” Sean Spicer, Mr. Trump’s first press secretary and now the 6 p.m. anchor on Newsmax, said in an interview.

For Ms. Psaki and her allies — who know the power of a certain bury-them-in-facts tedium — this may be more feature than bug. “You guys can be an ornery bunch, you know,” Mr. [David] Axelrod said of the reporters who cover the White House. “She commands respect.”