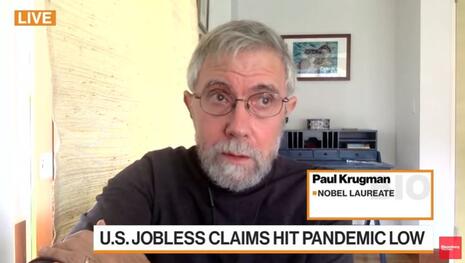 Respected economist turned partisan Democratic hack Paul Krugman marked the 20th anniversary of the 9-11 terrorist attacks in his own inimitable fashion in his column Friday by playing his usual despicable partisan games: “Foreign Terrorists Have Never Been Our Biggest Threat.” The text box: “Before 9/11, domestic fanaticism was already on the rise.” What is he talking about?

It may seem like a terrible thing to say, but a fair number of people -- especially in the news media -- are nostalgic about the months that followed 9/11. Some pundits openly pine for the sense of national unity that, they imagine, prevailed in the aftermath of the terrorist attack. More subtly, my sense is that many long for the days when the big threat to America seemed to come from foreign fanatics, not homegrown political extremists.

Krugman is the last person on earth with the moral authority to lecture anyone on 9-11, given how shamelessly he’s abused the tragic anniversary in the past.

He marked the morning of the 10th anniversary of the terror attacks in 2011 with a nasty blog post:

What happened after 9/11 -- and I think even people on the right know this, whether they admit it or not -- was deeply shameful. The atrocity should have been a unifying event, but instead it became a wedge issue. Fake heroes like Bernie Kerik, Rudy Giuliani, and, yes, George W. Bush raced to cash in on the horror. And then the attack was used to justify an unrelated war the neocons wanted to fight, for all the wrong reasons.

Krugman took up on Friday where he left off:

….The truth is that key parts of the American body politic saw 9/11, right from the beginning, not as a moment to seek national unity but as an opportunity to seize domestic political advantage.

And this cynicism in the face of the horror tells us that even at a time when America truly was under external attack, the biggest dangers we faced were already internal.

The Republican Party wasn’t yet full-on authoritarian, but it was willing to do whatever it took to get what it wanted, and disdainful of the legitimacy of its opposition. That is, we were well along on the road to the Jan. 6 putsch -- and toward a G.O.P. that has, in effect, endorsed that putsch and seems all too likely to try one again.

After predictably attacking Republicans for pushing tax cuts, he bragged about how he saw the emerging authoritarian GOP first.

In 2003 I declared that the Republican Party was dominated by “a movement whose leaders do not accept the legitimacy of our current political system.” But many people didn’t want to hear it. Those of us who tried to point out the abuses in real time were dismissed as “shrill” and “alarmist.”

The alarmists have, however, been right every step of the way.

Krugman, not for the first time, offensively suggested the real enemy to American democracy was within.

But it’s not an accident that Republicans today have left both tolerance and respect for democracy behind. Where we are now, with democracy hanging by a thread, is where we’d been heading for a long time.

America was viciously attacked 20 years ago. But even then, the call that mattered was coming from inside the house. The real threat to all this nation stands for is coming not from foreign suicide bombers but from our own right wing.

Classless Krugman also weaponized the 2015 Islamic attacks in Paris and the shooting of Rep. Gabby Giffords to attempt to seize political advantage for Democrats over Republicans.