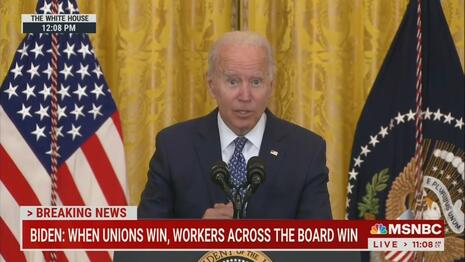 The front page of Wednesday’s New York Times warned “Big Business Mobilizing to Battle Tax Proposals.” The text box fretted: “Democrats’ Ambitions for Social Spending Are on the Line.” Trillions of dollars of new spending, in fact, as well as tax hikes on “the rich.” Reporters Jonathan Weisman, Alan Rappeport, and Jim Tankersley clearly took the side of President Biden and liberal big-spending Democrats.

Congressional Democrats always knew their battle plan for raising taxes on corporations, large inheritances and the superwealthy would not survive initial contact with the enemy.

They just didn’t realize that enemy would be North Dakota-nice Heidi Heitkamp.

“The enemy”? This story is already getting pretty ideological when a former Democratic senator is portrayed as an "enemy" of far-left spending schemes.

The Democratic former senator has emerged as the smiling face of a well-financed effort to defeat a proposed tax increase that is crucial to funding the $3.5 trillion social spending bill at the heart of President Biden’s agenda. Her effort is indicative of the difficult slog ahead as the business lobby mobilizes to chip away at Democrats’ tax-raising ambitions, which some lawmakers say will have to be scaled back to maintain party unity, an assessment the White House has disputed.

In the Times bubble, only one side lobbies for its agenda:

….corporate interests, led by the U.S. Chamber of Commerce, the Business Roundtable and Americans for Tax Reform, have mobilized a multifaceted lobbying and advertising blitz to stop the tax increases -- or at least mitigate them.

“They’re lobbying to try to escape their obligation to pay the taxes they owe, leaving working families to pay a larger share of the burden,” Mr. Biden said at the White House on Friday. “Somebody has got to pay.”

Under Biden’s proposals, individual income tax rates would rise, as well as corporate income tax rates. The trio of Times reporters sounded like “soak the rich” activists than journalists.

Many Democrats are determined to tax the wealth of America’s fabulously rich, much of which goes untaxed for decades before being passed along to heirs....

They carefully addressed all the complaints from more moderate Democrats by setting out bland unchallenged statements from the Biden administration.

“As Congress begins to finalize their legislation, I urge them to remember the historic opportunity that we have to end the race to the bottom and finally have a foreign policy and a tax code that works for the middle class,” she wrote.

Of course, Republicans performed some “pouncing,” which the reporters tried to neutralize with a sneering response from a liberal Democratic senator.

Republicans are already on the attack. After the disappointing monthly jobs report on Friday, Representative Kevin Brady of Texas, the ranking Republican on the Ways and Means Committee, said the slowing economy would “only get worse if the Democrats’ trillions in tax hikes and welfare spending is rammed through Congress in September.”

Senator Ron Wyden of Oregon, the chairman of the Finance Committee, said he understood that business groups and Republicans would howl that the tax increases would kill jobs, stifle the economy and hurt ordinary, struggling Americans.

“The big lobbies are going to attack you under any circumstance,” he said, “and half the time they’re just making it up.”

The Times concluded with some cheerleading liberal populism straight from the White House.

“Should we let millions of children grow up in poverty in order to protect offshore tax loopholes?” Kate Bedingfield, the White House communications director, wrote to House Democrats in a memo on Tuesday. “Should we let middle-class families bear crushing costs for child care and elder care rather than