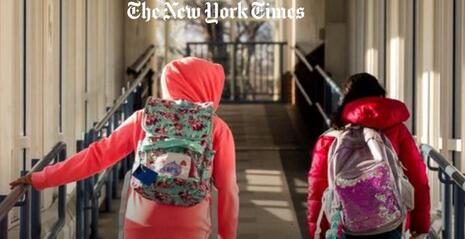 The New York Times has uncovered still more “culture wars” it will try to convince you were started by conservatives, this time in schools: “The School Culture Wars Over Masks, CRT and Gender Identity.”

Sarah Mervosh and Giulia Heyward collected anecdotes from fraught school board meetings around the country as the school year begins, including the controversy over accommodating transgenders in Loudoun County, Virginia schools. And there was wokeness on the syllabus in Minnesota:

“The water pressure is higher than it has ever been and there are more leaks than I have fingers,” said Kevin Boyles, a school board official in Brainerd, Minn., who said he recently received 80 emails in three days about face masks. He described being followed to his car and called “evil” after a board meeting where he supported a commitment to equity….

Not “equality,” mind you, but “equity." “Equality” advocates for equal treatment, while an “equity” policy tries to make up for past discrimination by divvying out resources in discriminatory fashion.

The Times profiled the liberal side of each issue sympathetically, from Black Lives Matter to Critical Race Theory and mask mandates. An Oregon school superintendent who pushed a BLM agenda was up next for a dose of Times sympathy.

…by the time students returned this spring, a new flash point had emerged: Should police officers welcome students back to campus? Though it was a local tradition, some parents said their children, sensitive after a year of Black Lives Matter protests, felt afraid.

[Melissa] Goff asked the police to pull back. Dozens of people -- including a school board candidate riding on a military vehicle -- protested at the district office, some calling for her resignation.

“Goff was fired without cause,” the paper whined.

Again, the Times located divisiveness, not in the acts of progressive activists trying to wedge ideology into school curriculum, but the parents and conservatives trying to halt the takeover.

The debates have been stoked in large part by politicians and political groups that are injecting partisanship into questions of education and public health.

Naturally, these "injecting partisanship" turn out to be two Republican governors who have angered the press by not signing on to onerous Covid restrictions like mask mandates.

At least nine states have banned or nullified mask mandates in schools, including Texas, where Gov. Greg Abbott, a Republican, is locked in a bitter fight with local school districts that are openly defying his order.

The battles have been particularly acute in Florida, where the Republican governor, Ron DeSantis, has threatened to withhold funding from schools that impose mask mandates.

This part about Critical Race Theory is willfully slanted and misleading:

At the same time, at least 28 states, largely Republican-controlled, have moved to restrict education on race and history. Another 15 states, mostly run by Democrats, have moved to expand racial education, according to Chalkbeat, a nonprofit education news outlet.

Much of the debate has centered on critical race theory, an advanced academic concept that analyzes racism at systemic levels and is generally not taught until college.

“This is not really about critical race theory,” said Dorinda Carter Andrews, a professor of race, culture and equity at Michigan State University, where she teaches such a course. “It’s really a distraction,” she said, “to suppress the ways in which educators engage young people in race dialogue.”

Keith Ammon, a Republican state representative in New Hampshire, is among those who have sought to regulate how teachers talk about race. He said that concepts like white privilege could create a “divisive worldview” and that he was wary of teachers who “bring their activism into the classroom.”

Mervosh and Heyward next sympathized with Matthew Hawn, who somehow finds time to teach in Tennessee when he’s not “tackling topics like immigration, gay marriage and abortion with his students, who were mostly white and conservative.” Among his sources? Hateful leftist writer Ta-Nehisi Coates.