Look Who's Talking: NY Times Bashes Fox News as the 'Fringe' on Vaccines 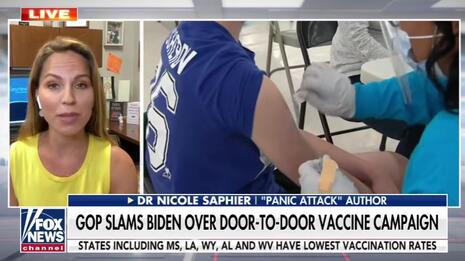 Speaking of “amplifying vaccine hesitancy,” it wasn’t Fox News but the Biden Administration that actually cancelled vaccinations, when the Centers for Disease Control recommended pausing the use of the Johnson & Johnson vaccine in mid-April over rare occurrences of blood clots, which marked the start of the decline in America’s daily vaccination rate.

Back in December, before the queen of England and the president-elect of the United States had their turns, the media mogul Rupert Murdoch received a dose of a Covid-19 vaccine. Afterward, he urged everyone else to get it, too.

Since then, a different message has been a repeated refrain on the prime-time shows hosted by Tucker Carlson and Laura Ingraham on Mr. Murdoch’s Fox News Channel -- a message at odds with the recommendations of health experts, even as the virus’s Delta variant and other mutations fuel outbreaks in areas where vaccination rates are below the national average.

Mr. Carlson, Ms. Ingraham and guests on their programs have said on the air that the vaccines could be dangerous; that people are justified in refusing them; and that public authorities have overstepped in their attempts to deliver them.

Opposition to vaccines was once relegated to the fringes of American politics, and the rhetoric on Fox News has coincided with efforts by right-wing extremists to bash vaccination efforts.

The comments by the Fox News hosts and their guests may have also helped cement vaccine skepticism in the conservative mainstream, even as the Biden administration’s campaign to inoculate the public is running into resistance in many parts of the country.

Hsu compared Democratic hesitation to Republican hesitation regarding vaccines, while skipping hesitation among black Americans. She chided Carlson for condemning colleges that make vaccines a requirement for students, but used dubious claims herself.

Infections among younger people were a major factor in a surge last summer. When students returned to colleges last fall, there was another Covid spike. A new variant that spread rapidly in younger age groups filled hospital wards this spring….

But the variant that “filled hospital wards this spring” with younger people happened almost exclusively in Michigan, as indicated in the Times article Hsu linked, which didn’t even mention colleges.

Hsu was obliged to note several Fox News’ personalities have actually been urging viewers to get vaccinated. But again, she felt the need to challenge Laura Ingraham’s suggestion that children rarely get sick from Covid with more dubious claims.

While children are less likely to develop severe illness from Covid-19, data from the American Academy of Pediatrics showed that more than four million children had tested positive for the coronavirus since the pandemic began, that more than 16,500 had been hospitalized and that more than 300 had died in the United States.

For context, 480 children are estimated to have died of the flu during the 2018-2019 influenza season.

Hsu wrapped up by citing an outside voice who shared her hostility toward Fox News.

In a recent opinion essay for The Daily Beast, Preston Padden, a former high-level executive at Fox Broadcasting, wrote that Fox News had “contributed substantially and directly” to “the unnecessary deaths of many Americans by fueling hesitation and doubt about the efficacy and safety of lifesaving Covid-19 vaccines.”….

“Former high-level executive” is right. As Newsbusters Tim Graham pointed out, Padden is “a Washington lobbyist who hasn't worked for Murdoch since 1997, and then worked for the liberals at Disney from 1998 to 2010.”