The cultural elite are sliming the legacy of President Ronald Reagan and using him as a cudgel to attack President Trump, reducing the former president to a racist proto-Trump, while suggesting the press and academia have actually been too soft (!) on Reagan’s legacy. 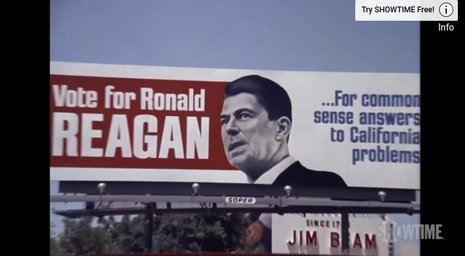 Was Ronald Reagan a kindhearted conservative who remade government and merits his standing as a beloved icon of the Republican Party? Or was he a glorified actor who won election with a coded racist appeal to white voters, setting the stage for the rise of President Trump?

That debate has long absorbed Reagan historians and biographers, particularly these days as Reagan’s legacy seems ever more gauzy when held up against these past four years of the just-defeated president.

From the second installment of “The Reagans,” it is clear where Tyrnauer, who began his career as a junior aide in Democratic politics before moving into magazine writing and directing documentaries, comes down on Reagan’s place in the nation’s fraught history of race and politics. The episode opens with 40-year-old footage of Reagan in Mississippi, affirming his support for “states’ rights” at a county fair filled with white voters.

“The reason I wanted to make this was to show how Reagan in many ways paved the way for Trump -- and the Republican Party that has now fallen into Trump’s hands,” he said in a video interview from his Coldwater Canyon home in Beverly Hills a week before Trump’s defeat was called. “I really thought it was very important to show that the Republican Party, certainly after the 1950s and since the era of this country’s civil rights movement and reckoning, has been on the wrong side of history. And Reagan was right at the center of that.”

Nagourney found himself struck by the Reagan-Trump parallels:

But more than anything, this documentary is animated by the notion of Reagan as an early practitioner of dog-whistle politics, a member of the generation of politicians who used coded appeals directed at an attuned audience of white voters.

“I believe in states’ rights,” he said in the summer of 1980 at the Neshoba County Fair near Philadelphia, Miss., seven miles from where three civil rights workers were murdered in 1964. It is a dramatic moment in which he seemingly affirms the power of Southern states to defy a federal government trying to end discrimination….

To be clear, the idea of Reagan as a politician who swam in the waters of American racism, preparing the way for a Trump presidency, is not a consensus position.

The paper's own feelings on “states rights” shift about. The Times is quite happy with the concept when a Democratic state like California is fighting for amnesty for illegals and sanctuary cities.

Nagourney did let a left-wing historian suggest the left throws around the “racism” charge too much:

The historian Rick Perlstein cautioned against reading too much significance into the Mississippi speech, arguing that it oversimplified Reagan’s complicated relationship with race. “Liberals, and I am a proud liberal, are always looking for smoking guns to prove that conservatives are racist,” Perlstein said an interview.

Still, Nagourney wanted Tyrnauer’s “harsh portrait of Reagan” to spur a “reappraisal” of his legacy, before teeing the filmmaker up for more of the tiresome “dog whistle” rhetoric.

Times television critic Mike Hale was similarly receptive to the left-wing revisionism: “A Presidency Under Revision – This documentary takes a hard look at Ronald Reagan’s two terms and sees a wrong turn.”

The charge it levels most strongly and at greatest length, especially in the earlier episodes, is that Reagan engaged in “dog whistle” racism as a campaigner, and that his economic policies as president were fundamentally shaped by racist stereotyping and fearmongering….

Hale revealed his liberal worldview here, though he calls it “cultural disposition.”

If you’re of a certain age and cultural disposition, there’s a particular sensation “The Reagans” might lead you to recall. The series doesn’t really go into it, but the sense of disbelief and panic among a large swath of Americans when Reagan defeated Jimmy Carter in 1980 was very similar, in all but degree, to the reaction many felt on election night in 2016. There’s a lesson there, but even after 40 years it’s too early to tell exactly what it is.