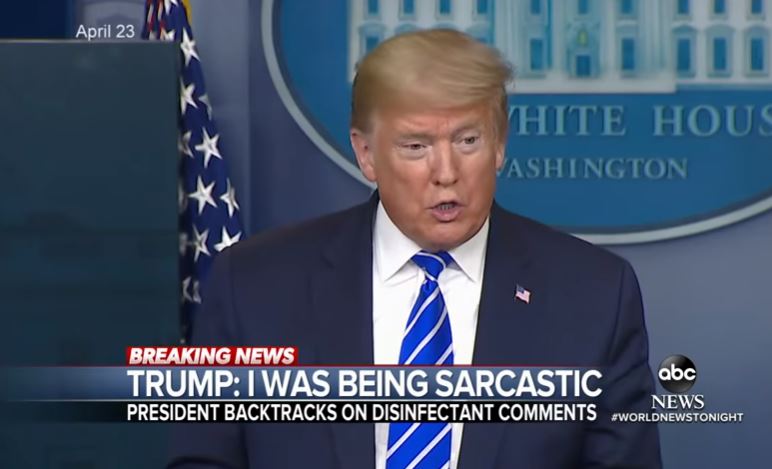 President Trump performed some confusing speculation on the efficacy of ultraviolet light and disinfectants during his coronavirus briefing Thursday, and as usual, the New York Times overstated the facts to push its anti-Trump agenda.

In Maryland, so many callers flooded a health hotline with questions that the state’s Emergency Management Agency had to issue a warning that “under no circumstances” should any disinfectant be taken to treat the coronavirus. In Washington State, officials urged people not to consume laundry detergent capsules. Across the country on Friday, health professionals sounded the alarm.

The frantic reaction was prompted by President Trump’s suggestion on Thursday at a White House briefing that an “injection inside” the human body with a disinfectant like bleach or isopropyl alcohol could help combat the virus.

(Reason magazine had a more reasoned take: “No, Poison Control Calls Aren't Suddenly Spiking After Trump's Disinfectant Comments -- Calls to U.S. poison control centers are up. They have been since March.”)

The Times eventually admitted the emergency calls are part of an ongoing trend “in recent weeks,” not instigated by Trump’s comments:

In two paragraphs of its report on the president’s remarks, the New York Times leads readers to believe it is quoting the president at enough length to provide accurate context....This excerpt implies that Trump was proposing this as a remedy. But he was not. He was relating a conversation he had had with Undersecretary Bryan about possible testing....

That article was flawed in other ways:

At the Thursday briefing, Mr. Trump had assailed a reporter who expressed concern that people might “think they would be safe by going outside in the heat considering that so many people are dying in Florida.”

Actually, Florida is doing relatively well against the coronavirus.

Mr. Trump has long touted various ideas against the coronavirus despite a lack of scientific evidence, from sunlight and warmer temperatures to an array of drugs, including the malaria drug hydroxychloroquine....

(Saturday’s paper had an article by this story's co-author, William Broad, “Ultraviolet Light in Summer May Slow Virus, but Not Enough to Eradicate It,” which sure sounds like an endorsement of... “sunlight and warmer temperatures.”)

But some of his recommendations, however, have had disastrous effects. Last month, an Arizona man died and his wife was hospitalized after the couple ingested a cleaning product that contained chloroquine.

Trump did not “recommend” anyone drink fish tank cleaner!

As the pandemic has spread to countries experiencing hot weather, including Australia and Iran, some groups have investigated whether the warmer summer season would slow the virus. Early this month, a committee of the National Academy of Sciences looked exclusively at humidity and temperature and found that they would have a minimal impact on the virus.

The paper just ran an article praising Australia for having tamed the virus so far. What changed?