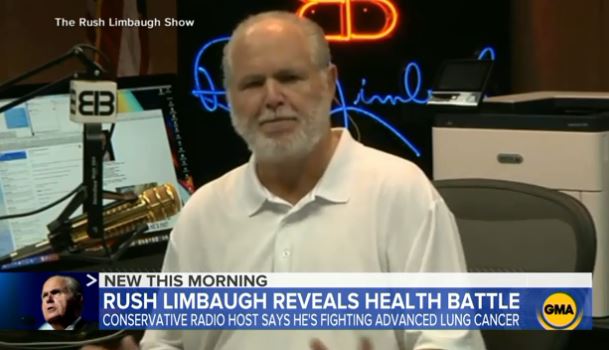 New York Times reporter Jacey Fortin reported on renowned conservative talk show host Rush Limbaugh’s sad revelation that he has advanced lung cancer. But not even that cruel diagnosis stopped Fortin from being classless toward a conservative figure.

The conservative radio talk show host Rush Limbaugh said on his live show on Monday that he had advanced lung cancer.

He told listeners that he had noticed some shortness of breath but was not experiencing symptoms at the moment, and that he would continue working but would be absent from the show for a couple of days to undergo testing and determine a treatment plan.

After noting “Supporters of Mr. Limbaugh shared messages of encouragement on social media,” Fortin unleashed several sentences of tacky criticism of unrelated incidents from years past.

Mr. Limbaugh’s cultural influence has been questioned by some listeners and sponsors. Mr. Limbaugh was admonished by ESPN in 2003 for suggesting that the N.F.L. player Donovan McNabb was being praised because the media was “very desirous that a black quarterback do well.” He was also criticized for saying in 2009 that President Barack Obama’s “entire economic program is reparations,” and for using the term “uppity-ism” in reference to Michelle Obama in 2011. And his show suffered in 2012 after he attacked Sandra Fluke, a law student whom he mocked as a “slut” and a “prostitute” after she spoke to a congressional hearing about birth control; many sponsors withdrew their advertising from the show in protest.

In 2003, Mr. Limbaugh acknowledged an addiction to prescription painkillers and entered a rehabilitation center. He was arrested on prescription drug charges in 2006, but made a deal with prosecutors that spared him a trial. Mr. Limbaugh complained of chest pains in late 2009, but said testing at the time seemed inconclusive.

Even stray comments showing Limbaugh being cavalier about tobacco dangers were repurposed as targets of mockery (who knew there were so many Limbaugh listeners at the paper tracking his every statement):

Mr. Limbaugh, who has said he started smoking cigarettes as a teenager but quit by the early 1980s, and who has often been photographed smoking a cigar, questioned the link between smoking and cancer in 2015.

The paper’s television critic James Poniewozik, reviewing Trump’s State of the Union, in which First Lady Melania Trump dramatically bestowed the Presidential Medal of Freedom onto Limbaugh, pasted a hostile label on the host without even mentioning his illness:

The speech was jammed with more twists and giveaways than a two-hour “Survivor” finale. President Trump awarded a young girl in the audience a scholarship. He had his wife, Melania, drape a Presidential Medal of Freedom around the paleoconservative shock jock Rush Limbaugh....