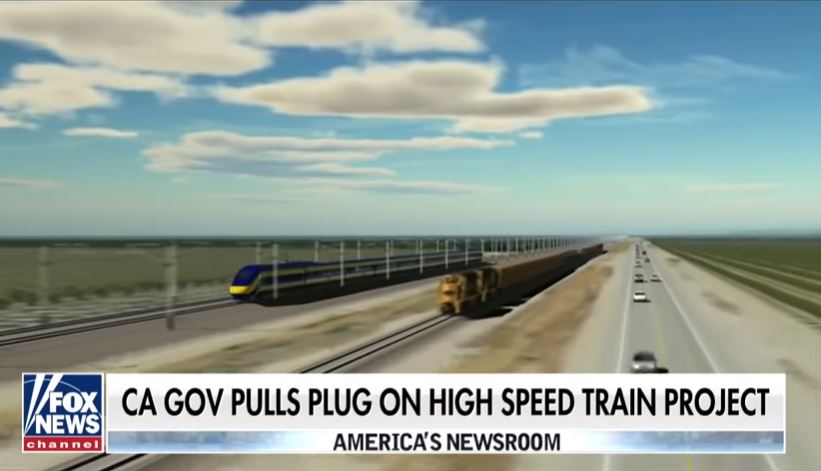 California’s new Democratic Gov. Gavin Newsom has made liberals crestfallen by conceding to fiscal reality and scaling back the massively expensive and delayed high-speed rail project meant to connect Los Angeles with San Francisco. But Monday’s New York Times didn’t quite frame it that way: “California Curtails a Rail Project, Undercutting Dreams of Building Big." The online headlines: “Can America Still Build Big? A California Rail Project Raises Doubts -- The state’s governor has sent an expensive high-speed rail project into disarray. If California can’t build it, who can?”

The text was slightly less starry-eyed about California’s ambitious, European-style high-speed rail project than Fuller’s previous embarrassing story two years ago, with some reality sinking in to the coverage. But the surrounding headlines and subheads and captions painted the concession to reality as a setback to California dreaming.

In a neighborhood littered with derelict warehouses, Miguel Arias pointed to a wide strip of dirt where California’s high-speed rail, one of America’s most ambitious and divisive infrastructure projects, has been taking shape.

The son of Mexican farmworkers and a newly elected member to the City Council in this sprawling Central Valley city, Mr. Arias is hoping the train will deliver to Fresno the California dream that long ago bypassed the impoverished region.

But California’s newly installed governor, Gavin Newsom, in his first major address to lawmakers this month, sent the project into disarray. The governor announced that the project, which was expected to connect the Central Valley to Silicon Valley, would be dramatically scaled back because of exorbitant costs.

For now, the train would begin and end in the Central Valley, the governor said, making no mention of a connection to the coast, where most of the region’s people -- and opportunities -- reside.

Mr. Newsom has since sought to walk back his remarks. But the portion of the rail line to Silicon Valley is still underfunded by at least $9 billion, and the governor’s comments have prompted deeper questions about America’s ability to think big and work together on complex public works projects, an area that seemed to have bipartisan support during the last presidential election before it was perennially deferred.

Some injections of reality came in the story's middle.

Even before Mr. Newsom’s comments, the project was troubled by repeated delays and cost overruns. The overall cost, estimated at around $45 billion when financing was approved by voters a decade ago, has now swelled to as much as $98 billion.

Even if it does continue, the project is likely to face more legal challenges and opposition. Though surveys suggest it still has majority support, especially among younger voters, many in the state, particularly in Republican pockets, oppose it.

But the project also has some disinterested skeptics who say they are not convinced that it made economic sense in the first place.

A dozen lawsuits have targeted environmental aspects of the projects, including another suit by the town of Atherton that argued, among other things, that the rail authority had conducted an inadequate analysis of where the train should be elevated along the San Francisco peninsula. A court ruled that the analysis had been properly done.

The reporters discovered left-wing not-in-my-backyard environmentalism, but didn’t blame it directly for the stoppage.

Mr. Richard said California’s strict environmental regulations have become a pretext for anyone who wanted to stop the project.

They returned to Arias at the end for an emotional plea.

“This is extremely personal,” Mr. Arias said as he drove his electric car through his district. “When people speak so critically of high-speed rail -- calling it a boondoggle or whatever -- they are not seeing the depressed neighborhoods every day that would benefit from it.”

“To take that away would be unconscionable,” he said.

While more skeptical than previous coverage, the reporters still didn’t do a hard-nosed dive into the dirty details of the “bullet train” project. A deeper, more skeptical investigation of the state of play from Reason magazine revealed:

People were sold a $33 billion train that would connect Los Angeles to San Francisco in under three hours. What Californians actually got was a corrupt, sprawling disaster that weaved through unnecessary parts of the state so that all sorts of interested parties could get their slice of the pie.