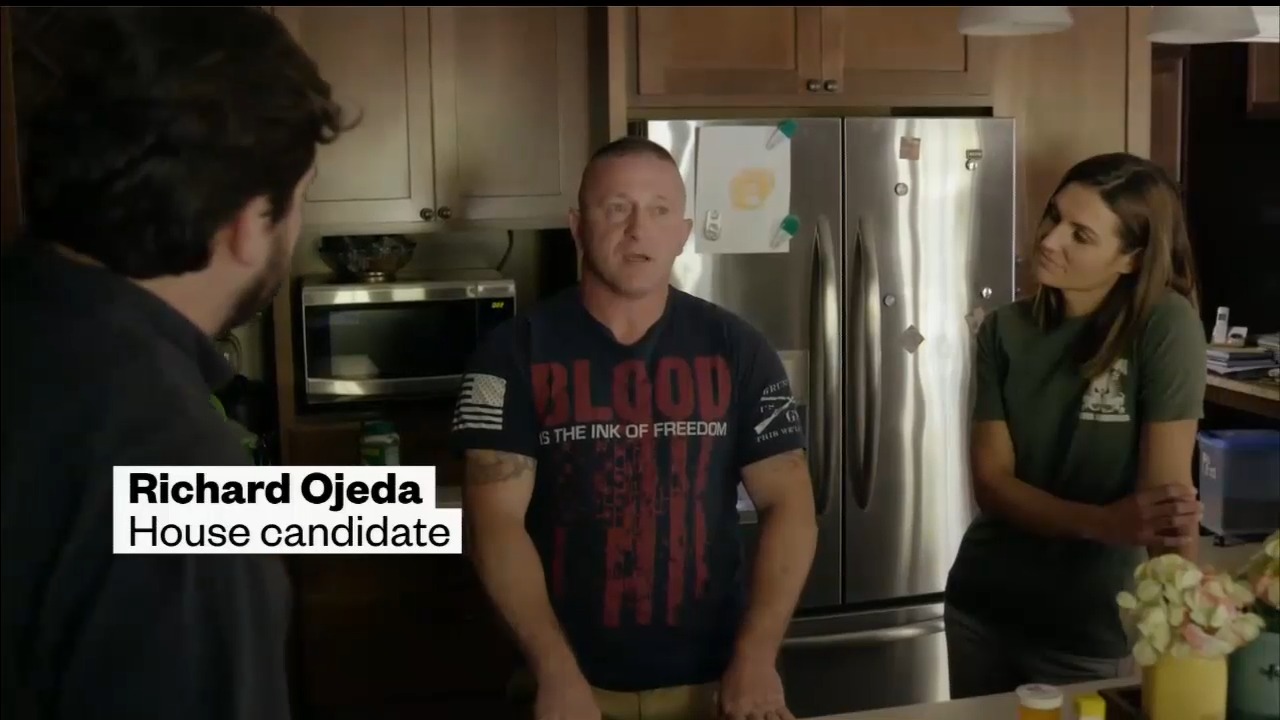 New York Times reporter Trip Gabriel was clearly smitten with Richard Ojeda, a Democratic congressional candidate in West Virginia, who rose out of the Times-supported teachers strikes in that state. The gushing headline matched the story’s enthusiasm: “How to Flip Coal Country? Ask the Democrat in Combat Boots.”

Ojeda is running against a Republican woman, Carol Miller, to fill outgoing incumbent Republican congressman Evan Jenkins’ seat, facts which aren’t at all made clear in this supposed news story. Gabriel was too busy arranging flattering vignettes for the Democratic candidate, like this scene-setter:

The woman in the Grateful Dead T-shirt approached the man in combat boots with the military haircut.

Richard Ojeda, who became the political face of a statewide teachers’ strike in West Virginia, posed for a selfie with the woman, Jennifer Renne, who teaches middle-school math.

An outspoken populist, Mr. Ojeda is running for Congress on a wave of labor activism thanks to voters like Ms. Renne, and he is doing surprisingly well as a Democrat in a district that President Trump won by nearly 50 points. Some Democrats see in him a model for how they can win in Middle American places where their party used to prevail, but has been decimated in the Trump era.

Mr. Ojeda’s encounter with Ms. Renne, 44, took place in the smoky, windowless bar of an American Legion post -- hardly a bastion of progressivism, but a natural place to find Mr. Ojeda, a former Army paratrooper.

And oh by the way, he’s running against a female Republican in a red state. But for now at least, "Democrat" trumps feminist political gains.

Whether Mr. Ojeda is a template for Democrats in other states or a charismatic figure whose appeal is unique to West Virginia is an open question. The enthusiasm of one supporter, Betty Thompson, 72, a substitute teacher from Lincoln County, transcended partisan labels. “Is he a Democrat or a Republican?” Ms. Thompson asked, uncertain of the answer. “I’d vote for him no matter what.”

Even more than for his politics, Mr. Ojeda is known for his big personality, with a gung-ho idea of leadership and a rousing speaking style. He is George Patton with an Appalachian twang and minus the profanity.

Gabriel eventually found a cup of cold water to dash lightly over the fiery partisan coals of his Ojeda flattery.

For all his momentum, though, most nonpartisan analysts still rate Ms. Miller, 67, as the favorite in the race. She has ties to the state’s business community, including her husband’s family auto dealerships, and her personal wealth could let her drown out Mr. Ojeda on television in the homestretch of the campaign.

The Times is still leaning hard on the teachers’ strikes that hit several states a few months ago.

Mr. Ojeda’s greatest advantage may be simply that there are teachers or relatives of teachers everywhere.

The school walkout that erupted over nine days in late winter, when striking educators and support personnel flooded the Capitol and the Republican governor and Legislature capitulated, has scrambled assumptions about politics in West Virginia. A longtime state senator who had accused strikers of holding children “hostage” was defeated in a Republican primary in May by a rival who pulled in union donations.

Jane Baumgardner, a retiree in Huntington, said she was uncertain about either candidate in the Third District race until she remembered that her daughter, a school counselor, had told her she loved Mr. Ojeda. Ms. Baumgardner said she would vote for him as well.

Mr. George is a Republican, but in his view, Mr. Ojeda has a good chance to win. “He took the fight to the legislators, and the teachers got a well-deserved raise,” he said. “He seems to be the champion of the people right now.”

Gabriel also couldn’t contain his enthusiasm about a (failed) Democrat in an April 2017 story he cowrote, “Georgia’s Long-Silent Liberals Come Out for a Congressional Race.” That story and this one make up just a small segment of the paper’s collage of Times profiles of "charismatic" Democratic candidates the paper clearly hopes will help Democrats win Congress back in 2018.