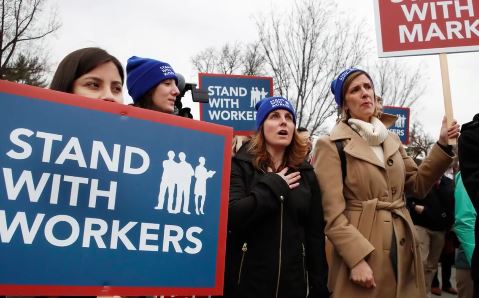 After a brief interlude, the New York Times is getting label-happy again, this time in its Supreme Court coverage. Beat reporter Adam Liptak on Tuesday covered the arguments in an important case involving free speech and government unions -- whether forcing workers to support public unions violates their First Amendment rights -- in “Newest Justice, Seen as Key Vote, Is Silent During Arguments on Unions.”

The first paragraph read some pro-union wishful thinking into the silence from the bench of the newest justice, Neil Gorsuch:

A crucial voice was silent at Supreme Court arguments on Monday in a case that could deal a sharp blow to public unions. Justice Neil M. Gorsuch, who almost certainly holds the decisive vote, asked no questions, leaving some doubt, if only a glimmer, about whether he would join the court’s conservative majority to rule that forcing workers to support public unions violates the First Amendment.

That glimmer of doubt almost reads like a “glimmer of hope,” something the Times’ liberal readership is no doubt straining to see.

But the D-word was entirely missing: "Democrat." AFSCME is a funder of Democrats, and that's the controversial matter.  As The Washington Post put it, "Democratic Party strength means that stronger laws protecting unions and more union density tends to help Democratic politicians."

OpenSecrets.org reports in the 2016 cycle, AFSCME gave 100 percent of their donations to Democrats. Or there's the chart for their 2016 Outside Spending:

There were still more “conservatives” on the front of Monday’s paper in “Web of Donors Sees a Chance To Curb Labor.” Reporters Noam Scheiber and Kenneth Vogel included nine conservative labels (12 including quoted material, the headline, and photo captions).

The online headline bluntly stated “Behind a Key Anti-Labor Case, a Web of Conservative Donors,” which hides the truth that these are government unions, and that one can be against government unions (as President Franklin Delano Roosevelt was) without being “anti-labor.”