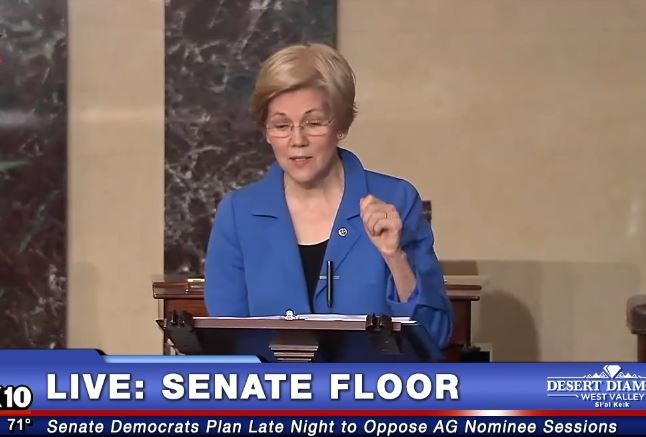 It’s the latest example of “sudden respect” for religion in the liberal press. Just as the media tried to imbue pro-choice, hard-core liberal Hillary with an aura of religiosity, McGrane performs the miracle for Warren in “For Warren, faith is (quietly) critical to her public life: Tells Atlanta church ‘there's Jesus in every one of us.’”

The story strangely omitted all mention of gay marriage or abortion, two issues where she does not line up with Biblical commands.

When Senator Elizabeth Warren last week visited the Ebenezer Baptist Church in Atlanta -- religious home to the heirs and legacy of Martin Luther King Jr. -- the liberal firebrand began her remarks in a familiar vein, decrying an economy that only works “for a thin slice at the top."

It might have been just another political stop, a timely bit of outreach to the African-American voters who could be key should she run for president.

But then Warren shifted her focus to Matthew 25:40 -- and Jesus.

Warren is well known for her acrid take on Wall Street money power, on the Trump presidency, and on all the forces in American life that, in her view, deny equal opportunity to all. Much less well known is Warren's relationship with God.

Yet it somehow made the front page of the Boston Globe.

But religious leaders who have known her since her first run for public office say her Christian faith is a constant, if quiet, presence in her life, that it is deep and authentic, and informs her work as a senator.

[Rev. Miniard] Culpepper joined her again in prayer just before she took the stage to give her speech to the 2012 Democratic National Convention in Charlotte, N.C., the biggest moment in her fledgling political career up to that point.

“She also believes in the Word of God, and wants to live according to the biblical teachings," he said. It's a relatively private side of Warren that would almost inevitably become much more public if she decides to run for president. Warren says she is squarely focused on her Senate reelection race.

She carries her own Bible with her, pastors say, a well-worn King James version she has had since the fourth grade.

Warren's affinity for the Matthew 25:40 verse is evident in her public statements and writings. She quoted the verse in her 2012 DNC speech, linking it to the legacy of the late Senator Edward M. Kennedy, whose former seat she was trying to wrest back from Brown at the time.

A familiar name in liberal Christian circles made an appearance.

She also turns to it in less public settings. A year or two after her election to the Senate, the Rev. Jim Wallis, president and chief executive of Sojourners, a liberal magazine and Christian social justice movement based in Washington, invited her to address a leadership summit his group hosts every three years. Matthew 25 was the text about which she chose to speak.

Warren's overt embrace of religiosity, which would doubtless be seen as disturbing coming from a conservative Christian politician, is seen as attractive coming from a liberal one.

He also remembers being struck by the sight of her Bible as he watched her open it on the podium as she started her talk. It was full of underlined passages. “It was clearly a Bible that somebody had been reading for a long time," he said.

Other religious leaders interviewed for the story likewise described Warren as authentic in her religious activity, and not a politician who talks of faith because it is politically opportune to do so.