NYT Reporter in Awe of His Favorite Kind of Republican: A Moderate 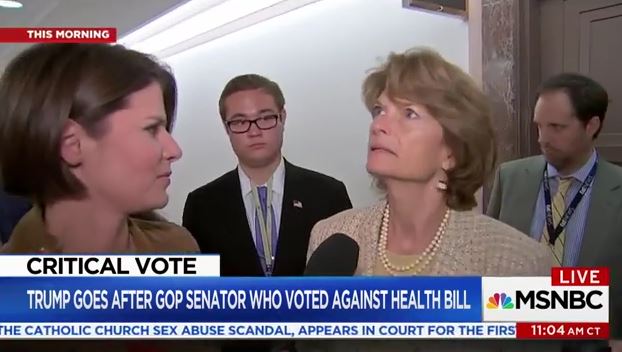 New York Times congressional reporter Carl Hulse, who now writes the paper’s “On Washington” column, made the front page Thursday with a tribute to his favorite kind of Republican -- a moderate currently making life difficult for conservatives: “A Swing Vote From Alaska Isn’t Swayed.” Profile of moderate Republican Sen. Lisa Murkowski. Hulse’s favorite kind of story of all is cheering on Democrats who batter Republicans, but he clearly enjoyed this take as well.

As President Trump pressed her and her fellow Senate Republicans last week to fall in line behind a repeal of the Affordable Care Act in the interest of party loyalty and protecting the Republican brand, she felt compelled to speak up.

“With all due respect, Mr. President,” she said, according to some of the people at the private White House lunch, “I didn’t come here to represent the Republican Party. I am representing my constituents and the state of Alaska.”

Mr. Trump did not appreciate the pushback. Ms. Murkowski was one of just two members of her party to vote against a critical procedural step on Tuesday. Afterward, Mr. Trump voiced his displeasure on Twitter: “Senator @lisamurkowski of the Great State of Alaska really let the Republicans, and our country, down yesterday,” he wrote Wednesday morning. “Too bad!”

Hulse, a veteran journalist, managed to misplace his cynicism, and turned traditional pork-barrel constituent advocacy into something heroic -- at least when performed by a politician he was currently admiring.

But it may be that it’s too bad for Mr. Trump, because he picked on someone unlikely to be rattled by his attack or by accusations that she deserted her fellow Republicans. Ms. Murkowski already survived a political near-death experience in 2010 when she lost a primary race to a Tea Party challenger and was essentially abandoned by the Republican Party.

She won a stunning victory in a rare write-in campaign -- and “Murkowski” is not all that easy to write in -- returning to Washington still a Republican, but one with a well-defined independent streak and a reputation of fierce advocacy for her remote and sometimes overlooked state.

“She is unshakable when it comes to her constituents,” said Senator Susan Collins, Republican of Maine, the other Republican who opposed Tuesday’s procedural vote. “She has a spine of steel.”

[Republican Sen. Susan] Collins said that as she and Ms. Murkowski, whose Senate desks are adjoining, prepared to turn their thumbs down on Tuesday, they discussed the possibility that the leadership might want to change their seating arrangement to keep them from being bad influences on each other.

Ms. Murkowski, who has little to no interest in national news coverage, carries a famous Alaskan name that has been an advantage and a hindrance. Her father, Frank Murkowski, was a four-term senator who left Congress in 2002 to run successfully for governor. After he was elected, he appointed his daughter Lisa, a state lawmaker, to his Senate post. Accusations of nepotism dogged her in her first campaign, in 2004, but she won -- only to lose the Republican primary to Joe Miller, a Tea Party firebrand, six years later.

After Republicans met on Wednesday to plot their next move, Ms. Murkowski said she hoped the Senate could still find its way to a health care proposal she could support.

“I think there are areas we can identify that we can find common ground,” she said. “That is kind of the hope and desire, and I’m simply willing to start to find how we can get to that point.”

Hulse concluded with a warning jab that Murkowski should keep up her “independence” – i.e., her anti-Trump stands.

The limits of Ms. Murkowski’s independence may still be tested.