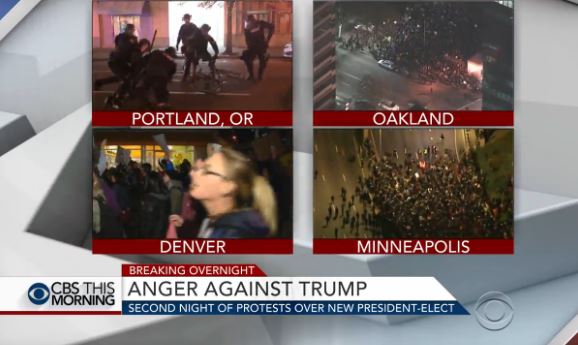 Thousands of demonstrators filled public squares, parks and streets in the country’s three largest cities on Saturday to protest President-elect Donald J. Trump, part of a wave of dissent that has swelled since the presidential contest last week.

They were transgender people, the children of immigrants, and parents toting infants on their back. They were families, students, and men and women of all ages and races. Many carried cardboard signs -- “Show the world what the popular vote looks like,” read one, “Putin Won,” said another. As throngs marched through city streets, the participants joined in a cry of “Not my president!”

Remember those concerned Times stories about the dictatorial dangers of refusing to accept election results? Apparently they only applied to Donald Trump. Reporters Eli Rosenberg, Jennifer Medina, and John Eligon didn’t seem to give it a thought.

Students have walked out of classes, protesters have blocked highways and demonstrators have clashed with the police. Speakers and protesters have talked about their fears of deportation, reduced access to birth control, a rollback of same-sex marriage and the potential for racially motivated violence.

They downplayed the violence of the anti-Trump protesters.

Most of the gatherings have remained peaceful, but tempers have flared sporadically. Demonstrators burned trash cans in Oakland on Wednesday night, and tried to block a highway on Thursday before the police intervened. In Portland on Thursday night, one marcher was shot, according to local reports. And after the protest there thinned out, dozens of people the police described as anarchists remained in the streets, clashing with officers. Car windows were smashed and smoke filled the air during what the police deemed a riot.

The Times unwittingly admitted something unflattering about these Trump-haters: they’re not psychologically sturdy.

For many of the people who have turned out for the current protests, it has been a kind of group therapy, and already seem to be cementing new, cross-sectional liberal coalitions. People with “Nasty Women” T-shirts have stood with signs that read “Climate change is real.” Black Lives Matter protesters have marched alongside those proclaiming themselves “Undocumented and Unafraid.”

In the Times reliable hands, Al Sharpton magically morphed from a race-baiting provocateur (and MSNBC host) into a “civil rights” activist, and the reporters dutifully handed him the megaphone to plot the resistance to the free and fair democratic election that just took place.

Leaders from several black civil rights groups like the National Action Network and the N.A.A.C.P. have been holding conference calls to form a legislative strategy, the Rev. Al Sharpton said.

They plan to lobby Congress on criminal justice reform and expanding voting rights, highlighting what they believe are the negative effects of voter identification laws and reductions in early voting periods, Mr. Sharpton said. They hope to use the stories of millions of newly insured Americans to highlight the devastating consequences of repealing the Affordable Care Act. They will fight any new stop-and-frisk policies in court, Mr. Sharpton said, and bring witnesses to congressional hearings to challenge cabinet appointments they see as questionable.

Their efforts will kick off with a rally and a march in Washington for the Rev. Dr. Martin Luther King Jr.’s birthday, just days before Mr. Trump is inaugurated, Mr. Sharpton said. “We’re not going to go away and say, because we lost an election, that we, therefore, lost our right to stand up for civil rights and civil liberty,” he said. “This, in many ways, we feel is bigger than one election.”