I Am Woman: NYT Celebrates Female Dynamic Duo of First Lady and Clinton 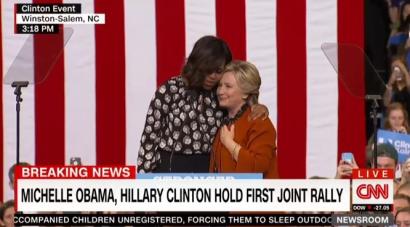 It was the “I Am Woman” edition of Friday’s New York Times. Reporter Julie Hirschfeld Davis celebrated Michelle Obama and Hillary Clinton’s embrace at a rally in North Carolina: “Clinton Basks in the First Lady’s Soaring Popularity on the Campaign Trail.” On the same page, reporter Trip Gabriel hailed the group Republican Women for Hillary.

The two women, once adversaries, embraced like best friends, calling each other “inspiring” and “amazing” and “my girl.”

They clasped hands and worked a stage surrounded by more than 10,000 roaring supporters, waving and pressing the flesh as a team. Their past rivalry appeared all but forgotten, or at least overshadowed by the stakes of a presidential race.

In their first joint campaign appearance on Thursday, Michelle Obama and Hillary Clinton made a public show of sisterhood and mutual admiration as the current first lady, a star on the campaign trail, sought to use her soaring popularity to boost the former first lady into the Oval Office.

Mrs. Clinton’s campaign has deployed Mrs. Obama extensively over the past several weeks in competitive states like North Carolina, working to capitalize on her reputation to stoke enthusiasm and turnout particularly among women, African-Americans and young people. Her approval rating in August was 64 percent, more than 10 points better than President Obama’s, according to a Gallup tracking poll at the time. Mrs. Clinton’s current approval rating is 43 percent.

There was fulsome praise of the first lady’s sloganeering.

Starting with a prime-time speech at the Democratic National Convention in July, Mrs. Obama -- who has done little to hide her distaste for campaign politics -- has become an invaluable asset for Mrs. Clinton. Her phrase denouncing the personal attacks of the campaign -- “When they go low, we go high” -- has turned into a favorite call-and-response that her audiences recite rapturously, similar to Mr. Obama’s “Fired up? Ready to go!” chant in his 2008 campaign.

As the first lady has become a louder voice in the campaign, Mr. Trump has tried to call attention to the friction that once existed between Mrs. Obama and Mrs. Clinton. One of his tactics has been to resurrect an eight-year-old comment the first lady made during the 2008 primaries.

“Our view was that if you can’t run your own house,” Mrs. Obama said at the time, “you certainly can’t run the White House.” The remark was interpreted by some as a veiled dig at Mrs. Clinton that was meant to refer to Bill Clinton’s sexual indiscretions. The Obamas insisted then that it was a comment about their own family, seeking to explain how they balanced politics with the raising of their daughters.

“So we’ve adjusted our schedules to make sure that our girls are first,” Mrs. Obama immediately added.

Still, Mr. Trump called attention to the statement in a posting on Twitter on Sunday, and his supporters have raised it each time Mrs. Obama praises Mrs. Clinton.

On Thursday, Mrs. Clinton tried to tap into Mrs. Obama’s Everywoman appeal, pledging to “take good care” of the kitchen garden she has planted at the White House, and speaking, as Mrs. Obama often does, about what it was like to raise a daughter there.

She even complimented Mrs. Obama’s dance moves, drawing a little boogie from the first lady, seated beside her.

While Davis went “high” with her Hillary hagiography, Trip Gabriel took the “low” anti-Trump view on the woman issue, “A Gender War Erupts in the G.O.P. as Some Women Draw a Line at Trump.”

Donald J. Trump has polarized men and women, with the sexes parting ways to such a degree that Election Day could produce the biggest gender gap in decades.

And now that division is being amplified by a gender war in the Republican Party itself. Men and women are taking sides over accusations of Mr. Trump’s mistreatment of women, with the latest controversy a blistering exchange between Newt Gingrich and Megyn Kelly of Fox News.

Increasing numbers of Republican women have turned on their party’s male leaders for defending Mr. Trump against accusations that he groped or forcibly kissed more than 10 women. Many are complaining publicly that for years, they stood up for the party against Democrats who accused it of pursuing a “war on women.” They are unable to do so any longer, they say, and they see hypocrisy in Republican men rallying behind Mr. Trump after the same leaders for years accused former President Bill Clinton of predatory behavior.

With Mr. Trump favored among men by an average of seven percentage points in recent polls, this year’s gender gap in how men and women vote could be the most yawning in decades.

Republican strategists with an expertise in reaching women are anxious that Mr. Trump’s candidacy will damage the party’s ability to appeal to them for years to come.

As the exchange went viral, reactions on social media in many cases showed a divide between Republican men and women. “There is a hot gender war underway,” Nicolle Wallace, a White House communications director for President George W. Bush, wrote on Twitter.

Mr. Gingrich, many noted caustically, was a poor scold on the issue of sexual conduct, given his history of having had an affair with a young congressional aide, who became his third wife, while he was still married to wife No. 2.

Gabriel found the Times’ favorite kind of Republican – those who are openly supporting the Democrat.

“Being a Republican woman is very different from being a Democratic woman,” said Jennifer Pierotti Lim, who leads a group called Republican Women for Hillary. “This sentiment that Newt Gingrich was speaking to -- if you’re a woman, you shouldn’t be offended by these things, you just should think about the issues -- that’s pervasive.”