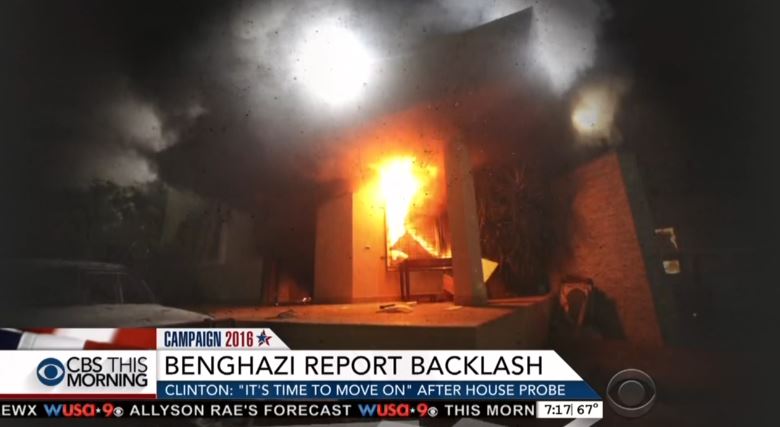 After the terrorist attack in Libya on the 11th anniversary of 9-11 that left four Americans dead, including Ambassador J. Christopher Stevens, the Obama administration at first falsely blamed the attack not on terrorism (which could have wounded Obama's re-election chances so soon before the 2012 election) but on a spontaneous mob erupton, over a 14-minute film on YouTube, portraying the Prophet Muhammed. The U.S. resident who made the short film, “Innocence of Muslims,” was soon conveniently jailed on other charges.

The White House’s story about the video, put out on all five Sunday talk shows five days later by then-U.S. Ambassador to the U.N. Susan Rice (she called it a “hateful video”), was later discredited, a fact that reluctantly filtered out into the media, even the New York Times. But apparently some Times journalists still haven’t gotten the news.

Before that, there’s more of the paper’s typical covering-for-Hillary slant, portraying the former secretary of state as vindicated, though some on the right find the report ineffectual.

Ending one of the longest, costliest and most bitterly partisan congressional investigations in history, the House Select Committee on Benghazi issued its final report on Tuesday, finding no new evidence of culpability or wrongdoing by Hillary Clinton in the 2012 attacks in Libya that left four Americans dead.

The committee, led by Representative Trey Gowdy, Republican of South Carolina, also harshly criticized an internal State Department investigation that it said had allowed officials like Mrs. Clinton, then the secretary of state, to effectively choose who would examine their actions. In addition, it included some new details and context about the night of the attacks on the American diplomatic compound and reiterated Republicans’ complaints that the Obama administration had sought to thwart the investigation by withholding witnesses and evidence.

Herszenhorn raised the bar for blaming Hillary quite high.

But the lack of any clear finding of professional misconduct or dereliction of duty was certain to fuel further criticism of the length of the investigation -- more than two years -- and the expense, estimated at more than $7 million. It also bolstered Democrats’ allegations that the inquiry was specifically intended to damage Mrs. Clinton’s presidential prospects.

After a campaign stop in Denver, Mrs. Clinton said that the investigation had uncovered nothing to contradict past findings, and that the House committee’s work had assumed a “partisan tinge.”

“I’ll leave it to others to characterize this report,” she said, “but I think it’s pretty clear it’s time to move on.”

In a sign that Mr. Gowdy was also facing pressure from the right, two of the committee’s conservative members, Representatives Jim Jordan of Ohio and Mike Pompeo of Kansas, wrote a 48-page addendum including somewhat harsher criticism of Mrs. Clinton and the Obama administration. 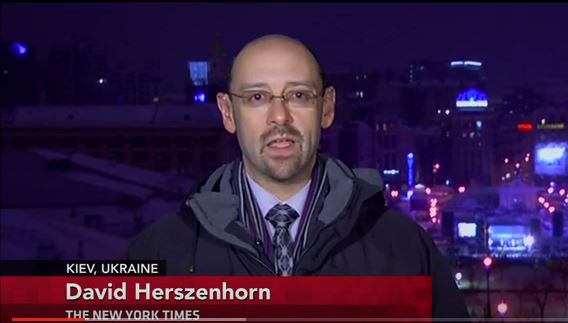 Hersezenhorn even referenced “numerous false statements” made by then-U.S. Ambassador to the United Nations Susan Rice, which included the falsehood about the attack being inspired by the video that mentioned Muhammed. But then he repeated it.

Susan E. Rice, then the United States ambassador to the United Nations, made numerous false statements about the Benghazi attack on television that one State Department press officer described in an email as “off the reservation on five networks!”

Democrats on the committee complained that they had been excluded from decisions on the report, and noted that the Benghazi investigation had dragged on longer than the inquiries into the Sept. 11, 2001, terrorist attacks; the assassination of President John F. Kennedy; the attack on Pearl Harbor; and the response to Hurricane Katrina.

You can’t drag your feet in responding to an inquiry, and then complain about how long it is taking.

In the most dramatic confrontation over the two years of the investigation, Mrs. Clinton testified before the committee for more than eight hours in October. The hearing was widely perceived to have backfired on Republicans, as she answered their questions and coolly deflected their attacks.

By the time of her testimony, Mrs. Clinton had already taken responsibility for the State Department’s handling of the attacks.

After another reference to the false “talking points," he repeats one of them:

The investigations generally concluded that after the attack, the Obama administration’s talking points were flawed but not deliberately misleading.

At a news conference at the Capitol on Tuesday, Mr. Gowdy praised as heroes the Americans who died in the attacks on Sept. 11, 2012. They included Ambassador J. Christopher Stevens and Sean Smith, a State Department information officer, who were killed at the main American diplomatic compound in Benghazi by a mob of militia fighters who had been incited by an American-made video deriding the Prophet Muhammad. The fighters were apparently further inflamed by news of an assault on the American Embassy in Cairo.

Surely every U.S. journalist (even those that get their news from the New York Times) or even casual follower of news knows that idea has long been discredited?

Here's the Times in October 2012: “Ms. Rice, the United States ambassador to the United Nations, has said that the judgments she offered on the five talk shows on Sept. 16 came from talking points prepared by the C.I.A., which reckoned that the attack that killed Ambassador J. Christopher Stevens and three other Americans had resulted from a spontaneous mob that was angry about an anti-Islamic video that had set off protests elsewhere....Later that Sunday, though, American intelligence analysts were already sifting through new field reports that seemed to contradict the initial assessment.”

Here’s the Times in November 2012: “C.I.A. analysts drafted four sentences describing ‘demonstrations’ in Benghazi that were ‘spontaneously inspired’ by protests in Cairo against a crude video lampooning the Prophet Muhammad. (Later assessments concluded there were no demonstrations.)”

Here’s a recent report on Tuesday from The Hill, which managed to actually read the new report, showing that Hillary Clinton knew it wasn't the video:

The GOP-led House Benghazi committee says the Obama administration claimed an anti-Muslim video was responsible for the 2012 attack, even though that explanation did not reflect eyewitness or real-time reports....House Republicans noted members of the administration -- including then-Secretary of State Hillary Clinton -- publicly pointed to the video as the reason for the attack. Clinton privately acknowledged in an email provided to the committee that an al Qaeda-like group was responsible for the attack.