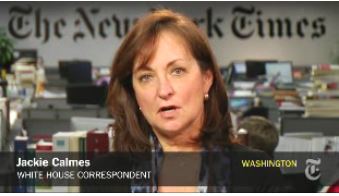 Jackie Calmes, one of the New York Times' most reliably pro-Democratic, Obama-supporting reporters, lit into the "conservative media" as leading the Republican Party to perdition in her Tuesday "Political Memo," "As the G.O.P. Base Clamors for Confrontation, Candidates Oblige."

Calmes' story was packed with labeling bias and dismissive, hostile portrayals of conservatives as angry, robotic followers of Rush Limbaugh and the like. There were an impressive 24 "conservative" labels in her 1,167-word story (almost beating the common conjunction "and," which appeared 29 times).

Based on her recent reporting, Calmes would welcome another government shutdown, which she once again on Tuesday claimed would damage Republican ratings, before turning her nose up at the "conservative" types that she mentions three times within 10 words, in a sentence that reads as a parody of clichéd liberal paranoia about lockstep conservatism: "But not with the conservative base, or with conservative news media and the conservative advocacy groups like those backed by the billionaire Koch brothers, who all demand confrontation."

From her Tuesday story:

For Senator Ted Cruz to call his party’s leader, Senator Mitch McConnell, a liar as he did Friday and again Sunday in the Senate was an extraordinary personal attack, but given how much the conservative base of the Republican Party has come to loathe its leaders, it was also good politics for the struggling presidential candidate.

While tensions between the ideological purists of the base and the pragmatists of the party establishment have simmered for decades, the breach has widened in recent years to nearly unbridgeable. Many Republicans now lament that the divide goes a long way to explain why their party lately has had so much trouble governing in Congress and picking a presidential nominee.

After noting that Cruz was attacking Senate Majority Leader Mitch McConnell's approval of a vote to reauthorize the Export-Import Bank, Calmes again raised the specter of a government shutdown:

But these intraparty battles could look trifling, Mr. Weber and other party leaders fear, compared to what the Republican-controlled Congress could face this fall: An escalation of infighting over essential bills to finance the government in the fiscal year starting Oct. 1 and to increase the nation’s debt limit. An impasse would risk a government-wide shutdown or default, which based on past episodes could damage Republicans with the public.

But not with the conservative base, or with conservative news media and the conservative advocacy groups like those backed by the billionaire Koch brothers, who all demand confrontation. That is the audience that Mr. Cruz and other Republican senators running for president are playing to....

While conveniently ignoring the actual issue of McConnell's broken promise on the Ex-Im Bank vote, Calmes pitched the issue as "pragmatic" moderates versus dangerous conservative activists.

For congressional Republicans, following the leader down a pragmatic path of compromise can get the followers in trouble back home, or worse, attract a more conservative opponent in the next primary election.

Calmes got condescending in her potted history of the "right-wing...hard-line."

Like Mr. Boehner, many in today’s party establishment once were proud troublemakers for conservatism themselves -- Mr. Weber was, along with Newt Gingrich, a leader among right-wing rebels in the House through the Ronald Reagan and George Bush administrations -- and they remain conservative still by any nonpartisan measure. But governing often means compromising.

By the early 2000s, conservative voters grew increasingly antagonistic toward party leaders, and so did the conservative media that both reflects and drives opinion among its hard-line audience. With Republicans in control of both the White House and Congress for six years, many conservatives were disillusioned and angered by the George W. Bush era’s legacy of deficits, mismanagement in Iraq and during Hurricane Katrina, recession, financial collapse and federal bailouts.

Calmes forwarded the liberal talking point of the conservative "echo chamber," though such a concept might apply more to liberals who get their news solely from the New York Times, MSNBC, or Comedy Central:

But spreading that notion is the conservative media, which has expanded in recent years, on air and online, to become many conservatives’ sole source of news, according to the Pew Research Center.

As opposed to liberals, who would never get their political talking points solely from Jon Stewart or MSNBC hosts like Rachel Maddow or Chris Hayes?