What Must Be Said About Harvey Weinstein Journo-Drama ‘She Said’ 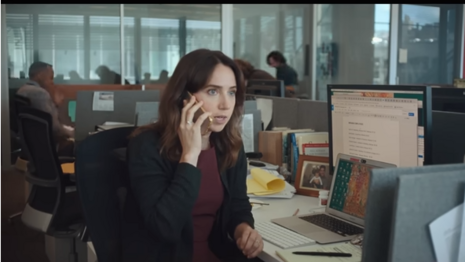 So it makes sense that “She Said,” the true story behind the New York Times expose of Weinstein’s crimes, starts with accusations against the real estate mogul.

The Oscar-bait film, which tanked during its opening weekend, offers a look at modern journalism in more ways than one. The drama shows it functioning at the highest levels, speaking truth to power while acknowledging the impact stories have on both abusers and victims.

She Said also reminds us journalism is broken beyond repair. Focusing on a rare example of reporters at their very best can’t disguise that truth.

It’s not the movie’s fault, of course. The blame falls squarely on institutions like The New York Times and The Washington Post who put partisanship, and power, above the facts.

She Said delivers on its promise, showing the rigorous work that helped expose Weinstein’s decade-long run as a Hollywood predator. The performances click, the real-life parables matter and the presence of Ashley Judd, one of Weinstein’s real-life victims, transcends the medium.

Did Judd ever dream she’d be throwing dirt on the grave of Weinstein’s career in a major Hollywood film? It doesn’t make up for the hurt and anguish, but it’s impossible not to cheer her inclusion.

It’s equally hard not to let other real-world narratives interrupt the story.

Reporters Jodi Kantor and Megan Twohey (Zoe Kazan, Carey Mulligan) follow journalistic best practices nearly every step of the way. They don’t jump to conclusions but keep their minds open. They work tirelessly to get critical facts on the record, using background interviews to prepare them for the larger truths.

And they refuse to hit publish until they’ve done everything possible to confirm their investigation’s accuracy.

Now, consider how the media actually works today. We see Fake News story after Fake News story peddled without care or consequences by most, if not all, the major news outlets.

Today’s reporters scramble to get stories out first, pushing caution and cynicism aside. So many narratives are too good to check, too delicious to reconsider with the necessary levels of skepticism.

Let’s not forget the stories we don’t read or see across our smart phone screen.

Reporters scoffed at the Hunter Biden laptop report without dedicating any resources to proving its “Russian disinformation” roots. Then, long after the final 2020 presidential votes were tallied, the same outlets sheepishly admitted they got it wrong the first time around.

No apologies. No soul searching. No course correction.

Hollywood has a long history of celebrating journalists on the big screen. They’re truth tellers, selfless souls who sacrifice everything to get to the truth. And, sometimes, that’s accurate.

The modern journalist is too often a propagandist, or someone who stays silent as his or her fellow scribes cover what matters most … with a pillow, to paraphrase IowaHawk.

Now, we know the truth. They’re hopeless partisans, cheerleaders for the DNC who will aggressively look the other way if a progressive behaves badly. They’ll hide a world leader’s muddled mental state and savage reporters who dare reveal the truth about a Democratic hopeful.

The creative team behind She Said isn’t responsible for journalism’s freefall. And to put the necessary context into the film would be unwieldy at best.

Audiences know better, though, at least those who sample alternative media outlets and keep their minds wide open to fallacious narratives.