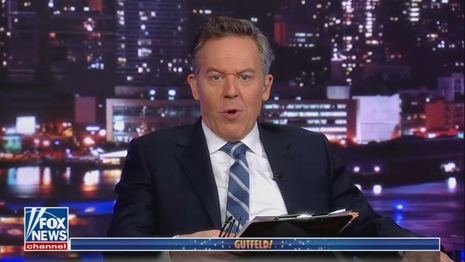 The Fox News series doesn’t depend on A-listers like most late-night shows. It’s about offering an alternative to the landscape’s hard-Left agenda and spotlighting talent you won’t find on The Late Show with Stephen Colbert.

That approach made Gutfeld! the king of late night.

Gutfeld shared the inner workings of the show with podcaster Adam Carolla this week, from how he prepares his nightly monologues to what led him to the biggest gig of his career.

That’s not all the comedians revealed during the extensive chat.

The duo shared the constant discrimination they face for being part of right-leaning projects. For Carolla, it’s Truth Yeller, a comedy series featured exclusively at The Daily Wire.

That’s only one obstacle facing Team Gutfeld, and Carolla has firsthand experience on that subject.

Carolla described what he faced when trying to hire writers for Truth Yeller.

Carolla added some artists watch his work but fear the repercussions of aligning with him in a professional capacity.

“I can’t tell you how many examples I have of this … ‘I love your show. Can’t do it,'” Gutfeld said.

“Also, there’s the interference that’s run up by the team,” Gutfeld continued. “It’s always the publicist. ‘We’re just looking out for [the talent].'”

“They have to navigate Hollywood in a way that’s even more intricate than a host or an actor, because they have so many clients with so many crazy beliefs that would [get them fired] in a heartbeat if they were found out,” Carolla said.

And it doesn’t matter if the star in question connects directly to the American public or draws huge ratings.

“You’re dealing with people who don’t actually like your customer,” Gutfeld said of too many publicists.

Carolla returned to a familiar theme, at least to right-leaning souls. The same industry targeted during the McCarthy era now actively discriminates against political views they don’t embrace.

“Oh, we can’t get the guys who wrote on ‘Conan’ to come into the writers’ room because they’re scared of being blackballed. It drives me insane that they never stop complaining about McCarthyism and they’re more than happy to blackball anybody who crosses the line,” Carolla said.

“They’re the new McCarthy-ites, especially in this woke culture,” Gutfeld said. “I’m counting on this show succeeding without names and creating our own celebrities, which is actually what happens at Fox.”

The problem isn’t new, though.

Several years ago comedian Michael Loftus shared how he pitched a more ideologically neutral late-night show around Hollywood. The general pitch earned praise, but the political angle stopped it in its tracks.

“We can’t put it on the air because it would look like we were friendly to the right,” Loftus recalled to podcaster and author Andrew Klavan.