It’s hard not to take The View with a grain of salt.

The long-running talk show features some of the most ill-informed commentary on the air, be it broadcast or streaming. The addition of Meghan McCain, a moderate Republican who did more pre-show research than her colleagues, elevated the discourse until she left last year.

Inexplicably, The View remains a TV staple, thriving well into its 25th year on air. It’s currently scrambling to find a Republican punching bag for the other hosts to pummel.

That search generated plenty of media heat, although it’s clear the producers will stretch it out as long as possible. Besides, what clear-thinking conservative woman would want the gig?

Lately, though, the show’s conversations have veered from comical to borderline dangerous.

Sound like hyperbole? Let’s hear what hosts Whoopi Goldberg and Joy Behar had to say on the latest episode.

Whoopi warns of the GOP's "big plan" to steal voting rights from black Americans then steal them from women.
She goes on to claim that schools are no longer allowed to teach kids about Anne Frank, the Holocaust, and slavery.
Behar says the right wants to destroy the country. pic.twitter.com/lnk0qigVgq

Goldberg, the most pragmatic voice on the panel, uncorked some of the most divisive rants heard in recent memory.

The subject? The manufactured attack on voting rights by the GOP, a talking point uttered by too many progressives to tally. Goldberg dug deep into this unhinged conspiracy theory, while far-left co-host Sunny Hostin nodded grimly along. 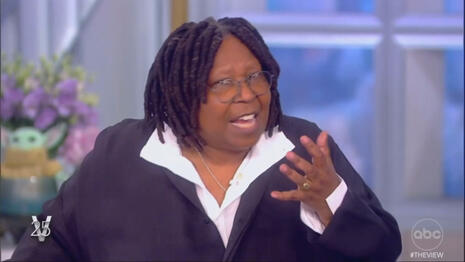 “This is part of the big plan to control what happens in America, I believe,” Goldberg said of the GOP. “You take those voting rights away, people are gonna be so angry, but there will be nothing they can do about it because we’re in charge. Next thing comes the women. We’re gonna take your rights away, just like we’re taking X, Y and Z, because they’ll be nothing you can do.”

Can she quote any facts, statistics or other data to support her rant? Of course not. It doesn’t exist.

Next, Goldberg said schools can no longer teach “what happened to black people,” possibly a reference to Republicans attacking Critical Race Theory. No mainstream Republican suggests the horrors of slavery are off limits in the classroom.

The Sister Act star then argues those who disagree with Republicans, like her, are quickly dismissed.

Behar, a less cogent voice than Goldberg, took the crazed comments even further. She suggests what’s happening in other countries, where freedom is in short supply, will sprout up stateside.

Liberals are the ones eager to censor journalists like Tucker Carlson and Fox News in general. Just ask Judd Apatow, for starters. How many boycott campaigns have emerged in recent years attacking Carlson and, before him, the late Rush Limbaugh?

Liberals also want to silence Joe Rogan. He’s not a journalist but someone eager to let multiple sides of a story be heard.

The irony that The View typically has one conservative host at a time, and hasn’t had any permanent conservatives on the show in months, is lost on this troupe.

The View isn’t a place for serious conversation. That’s been the case for some time. But imagine if someone watches this nonsense and believes even a fraction of it. What should they do next? What measure isn’t too extreme to stop the GOP for succeeding with its brilliant, evil scheme?

We live in a free society, and if a show uncorks this kind of conspiracy mongering free of facts, so be it. It still should be called out for what it is, and the 2022 version of The View is bordering on stoking even more division than what we’re seeing across the country today.