Media Wake Up, Realize Comedy Crumbling in Our Woke Age 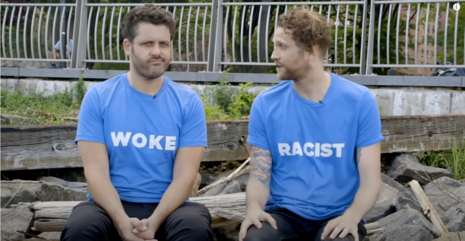 Ask anyone who consumes right-leaning media (or has an open mind), and the answer is a swift and assured, “Absolutely.”

Try creating comedy when the wrong joke or punch line can threaten your gig, if not your entire career. Even past jokes, especially past jokes, can turn a dream job into a missed opportunity.

Just ask Shane Gillis, who snagged a coveted spot on Saturday Night Live before ugly Asian jokes he made during a podcast came back to haunt him. Or Kevin Hart, whose decade-old gag targeting homosexuality crushed his dream of hosting the Oscars.

It’s no accident the annual soiree hasn’t had a comic host since then.

Reporters and critics alike enforce the new status quo, calling out creators who dare tell jokes outside the approved groupthink. A recent interview with the team behind “Lady of the Manor” showcases how entertainment reporters grill artists on how woke their material actually is.

And you better answer correctly.

Yet media outlets are starting to realize the comedy landscape has shifted, even if they can’t directly tie it to the woke revolution.

Time magazine reports broadcast TV has mostly given up on sitcoms, a mainstay ever since Lucy Ricardo shoved conveyor belt chocolates down her mouth.

NBC’s “must-see” comedy block is ancient history, and the situation doesn’t end there.

The CW belongs to superheroes, Archie Comics and B-grade nonfiction programming now. While Fox’s Sunday adult-animation block is still going strong, there isn’t a single live-action sitcom on its fall schedule. ABC has carved out Wednesdays for family comedies, but the only “new” title is a Wonder Years reboot … Among the Emmy nominees for Outstanding Comedy Series, only one—ABC’s black-ish, whose eighth and final season is expected to premiere in 2022—hails from a broadcast network.

The comedy landscape is richer on cable and streaming platforms, according to Time, with the occasional breakout hit like Apple TV’s “Ted Lasso.” Neither platform boasts broadcast television’s massive reach, the very definition of mainstream media.

We recently learned ABC’s Modern Family, arguably the greatest sitcom of the modern era, wouldn’t be greenlit by the studio under the “new” rules.

Even existing broadcast shows must adapt to the Cancel Culture bylaws or face extinction. It’s why Apu, the Indian-American character on The Simpsons, got the axe. It also explains the woke final season of Brooklyn Nine-Nine.

CBS offers more traditional comedies, but Time notes most of the shows hail from a single producer, Chuck Lorre. The sitcom titan suffered his own near-cancellation with United States of Al earlier this year. The show follows a former Marine’s friendship with an Afghanistan interpreter.

Critics savaged the show for its positive portrayal of the U.S. Military and for the acting playing the Afghanistan translator, played by Adhir Kalyan, not hailing from that country in real life. Somehow, the show survived for a second season beginning next month.

Is it any wonder TV screenwriters would rather churn out anything but a situation comedy?

Time takes a stab, late in the article, at the root cause of the shift.

[Broadcast TV’s comedy] death is also emblematic of a culture that has become so politically, socially and generationally fragmented, with heightened sensitivities on all sides, that large swathes of the American public can’t even agree on what’s funny anymore.

Actually, it’s a minority of people deciding what we’re allowed to laugh at these days. The august magazine must realize Twitter isn’t real life … right?

Plus, the “heightened sensitivities” are mostly on one side, the side with enough power to cancel entire shows if needed. CBS did just that when social justice warriors targeted the woke-but-not-woke-enough series The Activist.

That “side” can even crush a show before cameras get a chance to roll. See HBO’s proposed Confederate”series.

Meanwhile, the situation is worse on the big screen, according to Collider. Straightforward comedies are as rare as rom-coms today both before and during the pandemic. Sure, the MCU delivers laughs between the superheroics, but the days of pure comedy smashes like Bridesmaids, Wedding Crashers and The Hangover are over.

Some of the actors behind those hits spend more time apologizing for them than making new ones.

Again, streaming platforms are plugging some of the gaps here, but the overall quality of those films leaves plenty to be desired. For every Palm Springs, a smart, celebrated Hulu offering, there are mediocrities like Vacation Friends, Murder Mystery and Father of the Year.

It’s easy for a Netflix or Amazon Prime to trot out lackluster fare like Coming 2 America, a film which would have enjoyed a solid opening weekend before word of mouth crushed it. You’re not asking audiences to leave their houses, potentially hire a sitter, endure boorish patrons and pony up $25 or (much) more to see them.

The Collider reporter correctly notes how big, glossy franchises are the new coin of the realm, forgetting one critical point.

Comedies are far cheaper to make than action films or superhero extravaganzas. So they’re much less risky, in general, with the potential for serious ROI. A comedy can swing for the fences and miss without denting a studio’s bottom line. It’s one reason horror remains a box office mainstay. They’re relatively inexpensive to make and often turn a tidy profit.

Horror and comedy are two genres that benefit the most from the theatrical experience. There’s nothing like laughing along with total strangers in a darkened theater.

Second best? Collectively cowering in your seat during a horror movie. Those sensations can’t be replicated at home, no matter how crisp your TV’s sound bar may be.

None of this mentions how late night TV and “Saturday Night Live” have embraced partisanship over comedy, or that the latter hasn’t generated a breakout movie star in ages. Yes, Kristen Wiig, Bill Hader and Kate McKinnon are all big talents, but none can open a film like Bill Murray, Chevy Chase and co. back in the proverbial day.

Except mainstream media outlets either ignore their excellence or, in the case of the Bee, try to squash it.

Laughter hasn’t gone away. You just have to squint hard to find it.

Comedy is hurting, no doubt, and it’s good that reporters are starting to notice the problem. Now, if they could sidle up in favor of free speech we might be able to do something about it.