The first requirement for a feminist is to be shameless about abortion. In the wake of the videos exposing the horrific Planned Parenthood racket in dead-baby body parts, a gaggle of feminists created a social-media campaign called “Shout Your Abortion,” with the aim of dispelling all “sadness, shame or regret about abortions. One should shout about it with pride...even joke about it.

The campaign manufactures T-shirts emblazoned with the Orwellian words “Abortion is freedom,” and “Everyone knows I had an abortion.” 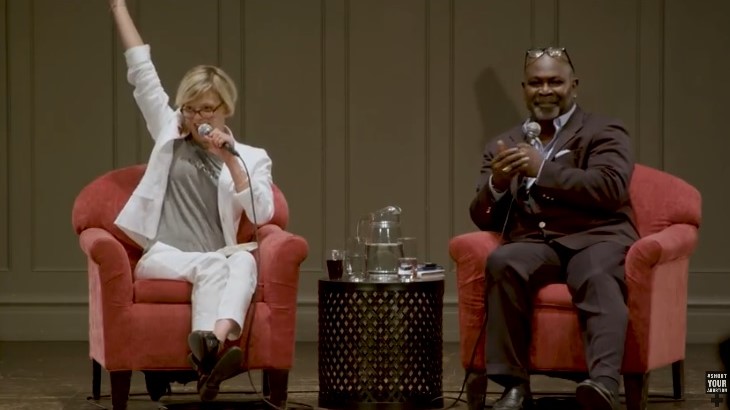 In the last few days, a video surfaced of radical-feminist actress Martha Plimpton interviewing abortionist Dr. Willie Parker for a “Shout Your Abortion” event in Seattle. MRC's Katie Yoder reported she began by joking about her “best” abortion. Being in Seattle was special because “I also had my first abortion here at the Seattle Planned Parenthood! Yay!” This led to sustained applause and cheers.

But the comedy kept coming from Plimpton: “Notice I said ‘first.’ And I don’t want Seattle — I don’t want you guys to feel insecure, it was my best one. Heads and tails above the rest. If I could Yelp-review it, I totally would.” The feminists are so ethically obtuse they want to compare their abortion experiences to Chinese restaurant reviews.

The idea is to remove the stigma of an unborn baby being killed and removed from the womb, rendering it the moral equivalent of cutting your fingernails or getting an appendectomy.  “Abortion is not some crazy weird last resort,” Plimpton told a supportive ABC reporter on Nightline in 2015.  “It is a normal part of women’s medical lives.”

And people who disagree?  “These are not the brightest bulbs that we’re dealing with here.” Those dummies think the baby has a life, or rights of some kind.

Removing the stigma clearly requires denying the unborn baby has any humanity. So Plimpton and Dr. Parker dismantled the Hippocratic Oath. Parker asserted “first, do no harm” should be translated as “don’t judge a woman seeking an abortion,” because somehow an abortion does no harm to anyone.

Parker energetically denied science in this War on Stigma. He joked if you really believe that abortion is murder, call 911 and see if the police will come to an abortion clinic.”

Minutes after this nonsense, Plimpton lamented the religious “prejudice” of Christians, our alleged belief that “women are incapable of understanding what they’re doing.” Then Dr. Parker had the audacity to suggest that the pro-life people – he calls them the “antis” –  need to take their “personal” religion and keep in in a “private space,” but when it comes to community issues like his abortion business, “we have to rely on more objective things like science and evidence.” (That was greeted with big applause.)

By the way, the “Shout Your Abortion” collective also sells Dr. Willie Parker T-shirts,  and the order form gushes “Dr. Willie Parker is our hero. Like, start crying a little bit every time you think about him kind of hero.”

Feminists have placed abortionists on the highest pedestal of their secular sainthood, for they have not only “liberated” women from the burdens of their inconvenient reproductive truths. They have concocted an elaborate, if scientifically ridiculous philosophy that denies they’ve destroyed anything human and absolves them of any guilt for their deadly sins. They bought their  abortions....and then they cried for joy and picked up their fangirl T-shirt.