Our very secular national media have a favorite narrative when it comes to “hate speech” and religion. Since 9/11, our national sin is “Islamophobia." Anti-Semitism continues to exist in isolated pockets, but it's so... yesterday. “Hate speech” against Muslims is now a top shelf matter for the politically concerned.

And like falafel from heaven, they can now attach this Islamophobic hatred to President Trump  and his “travel ban." But how newsworthy is this is this anti-Muslim wave in the United States, when compared to similar crimes against Jews? The actual numbers do not matter. Obama’s Department of Justice reported in its 2015 “hate crime” statistics some 664 anti-Semitic incidents, compared to 257 anti-Muslim incidents. Those are crimes, not speeches. 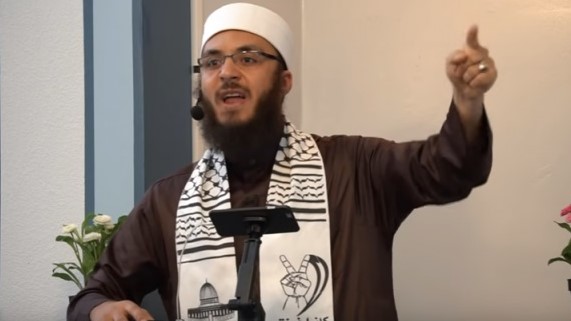 Apparently only “Islamophobic news organizations” found it newsworthy when left-leaning Jewish groups like the Anti-Defamation League and the Simon Wiesenthal Center condemned the July 21 remarks of a California imam named Ammar Shahin at the Islamic Center of Davis, right across the street from the University of California-Davis. Shahin, speaking in English and Arabic, prayed to Allah to "liberate the Al-Aqsa Mosque [in Jerusalem] from the filth of the Jews" and to "annihilate them down to the very last one. Do not spare any of them."

When exposed for his Friday prayer invoking for a righteous massacre, Shahin and his mosque offered a ludicrous defense. The Middle East Media Research Institute, which took the sermon from the mosque’s website and translated the Arabic, was accused of deliberately misinterpreting the remarks. His apologists claimed the imam did not say he wanted Allah to “annihilate” all the Jews, but the actual word was “destroy,” which somehow was not a call to violence, but merely a “supplication that is generally used against oppressors.”

The ADL also condemned a sermon on the same day by Mahmoud Harmoush, the imam at the Islamic Center of Riverside -- surprise, located near the University of California, Riverside – alleging the land of Palestine was stolen from Muslims through "killing, crime and massacres," and that Jews are now trying to extend that conflict to "most of the Middle East." He ended his prayer with a call for Allah to "destroy them...rend them asunder. Turn them into booty in the hands of the Muslims."

It must be noted that  these imams have been presented in some media circles as victims, not persecutors. The Belief blog on CNN.com honored Harmoush in 2010 as one of their “Most Intriguing People” when the local Baptists opposed the relocation of his mosque at the time in Temecula, California.

On March 23, 2016, the Riverside Press-Enterprise sympathetically spoke to Harmoush about Donald Trump and Ted Cruz proposing vetting of Muslims and monitoring Muslim communities for terrorism leads. "It would be a gross mistake to burden the Muslim community with somebody else’s crime," Harmoush said.

On January 25, 2016, the San Francisco Chronicle reported mournfully on the Davis mosque being vandalized, and someone wrapped the front door handles with bacon to mock their ban on eating pork. The community circulated a “Statement of Love” for the mosque, and Shahin mourned the uptick in hate crimes as Trump was sworn in. "We almost had no problem with anybody around us," Shahin said. "It's very rare to have something like this happen in Davis, and it’s very scary, too."

These vicious calls to prayer for a new Holocaust just don’t excite the national media. As the Jewish website Tablet preached, these speeches should “jolt good liberals into action, as they imagine how they would feel if the speakers were, say, right-wing Evangelicals calling on Christ to smite the gays.”

As usual, the media don’t want to change their narrative that Trump’s rhetoric inspires terrorism, and somehow he's the best recruiter for ISIS. In the hands of the “news” manufacturers, facts are malleable things.