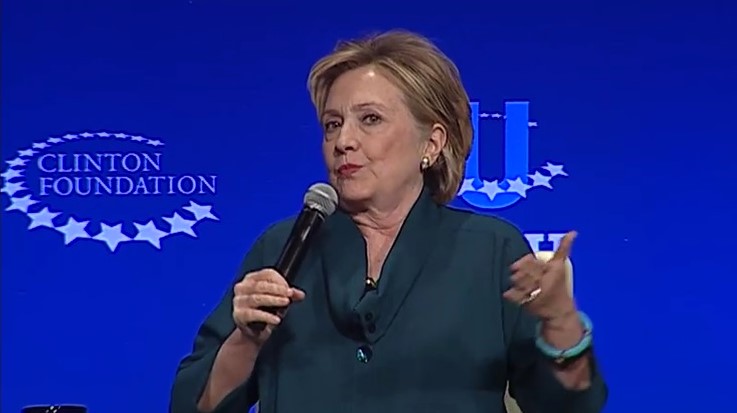 The Clinton Foundation has become a serious problem for the Hillary Clinton campaign. Everyone knows the Clintons made a mockery of the promises they made to Team Obama. Even the left-wing site PolitiFact says it’s “Mostly False” that they obeyed the rules.

Like her husband Bill, who infamously claimed “I did not have sexual relations with that woman,” Monica Lewinsky, Hillary is going around claiming “My work as Secretary of State was not influenced by outside sources.”

On January 5, 2009, Hillary Clinton sent a letter to State Department ethics official James Thessin promising “I will not participate personally and substantially in any particular matter that has a direct and predictable effect on my financial interests or those of any person who interests are imputed to me,” including her husband.

Who didn’t anticipate that this would end up in an ethical mess? Which genius hasn’t observed over the last 25 years how the Clintons break their promises? Some people saw this as a potential scandal, but they didn’t stand a chance with the Clinton-loving press.

In October of 2007, liberal pundit Matthew Yglesias asked in the Los Angeles Times, “Who's giving money to Bill Clinton?” He complained that the Clintons should release their foundation donors before she could become president in 2009: “Disclosing who's contributing to Bill Clinton's foundation after his wife wins the election would be about four years too late. The voters ought to have this information before the election, when it could still make a difference.”

Surprise, surprise: Hillary didn’t win, and the Clintons didn’t release a donor list until December of 2008, when she was asked to become Secretary of State. The blather on the TV networks was all about how Obama’s cabinet was a team of geniuses. "We have not seen this kind of combination of star power and brain power and political muscle this early in a cabinet in our lifetimes,” gushed George Stephanopoulos on ABC. The fix was in.

As her four years wound down, the pundits celebrated the wonderful work of the Clinton Foundation.  On The Chris Matthews Show on April 15, 2012, journalist Howard Fineman said Clinton modeled his foundation on Jimmy Carter, but “he's Jimmy Carter with a better touch.” Chris Matthews replied, “And much bigger in terms of the amplification of what he's been able to do. The Clinton Global Initiative is huge. It's done a lot to build his role in history...beyond anything he was able to do as president.”

On August 23, the Associated Press underlined the degree to which her promises were vaporized. More than half the people outside the government (at least 85 of 154 people) who met or had phone conversations scheduled with Clinton in the first half of her “public service” at State donated to the family foundation. At least 40 donated more than $100,000, and 20 contributed more than $1 million.

The AP based these investigations of Hillary’s office calendar on the first half of her tenure at State, and only after they filed a Freedom of Information Act request to acquire them. The other half of the calendars won’t be released until after the election.

Once again, the Clintons are making promises to downsize their involvement with the foundation if she wins the presidency. At this point, that sounds as believable as an Anthony Weiner promise to stop texting. But the Clinton-enabling reflex in the media is dangerously strong, and the Clintons  are threatening to take advantage of it for the rest of this campaign.