The White House Correspondents Association throws an enormous annual dinner that’s a pillar of the Washington power-elite scene. The correspondents hire a comedian and the president comes to be mocked a little....or a lot. Reporters still adore Stephen Colbert ripping into George W. Bush in 2006, still using his fake-conservative idiot character.

So this year, the dinner hosts picked Colbert’s Comedy Central replacement, Larry Wilmore. He was seriously unfunny, and he knew it. “From a pure comedic point of view, I know that I lost the room early,” he admitted to The Washington Post. But the media coverage made it clear that Wilmore suffered badly in comparison – not to Colbert, but to his opening act, “comedian-in-chief” Barack Obama. 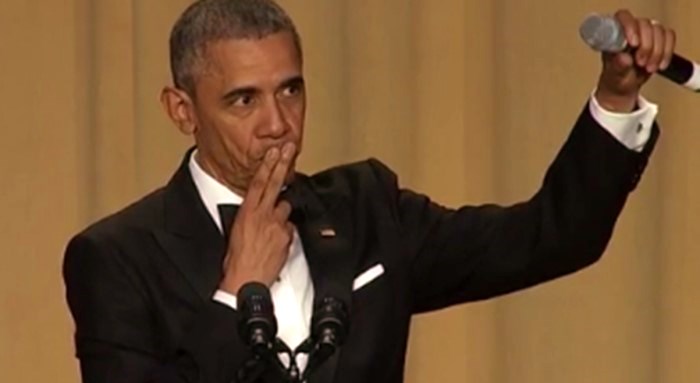 Start with who was awarded the comedy soundbites. On the morning, evening, and Sunday shows on ABC, CBS, and NBC, we counted 35 Obama jokes replayed. Wilmore had two soundbites – and one of them wasn’t a joke, it was Wilmore gushing to Obama: “When I was a kid, I lived in a country where people couldn’t accept a black quarterback. And now, to live in your time, Mr. President, when a black man can lead the entire Free World....”

ABC cut the Wilmore soundbite off so they could show the president’s triumphant “Obama out” microphone drop.

Obama is not a “lame duck” to these people. He is still described as if he were a beautiful swan. On Good Morning America, ABC’s Nick Watt declared “President Obama’s correspondents’ dinner finale, and Hollywood was here to witness history.” Even his jokes are “historic.” Watt turned to Bill Nye and suggested “Funniest president of all time?” Nye replied: “My understanding was Abraham Lincoln was pretty funny, but I never saw him perform.” Watt concluded “One thing is for certain. The comedy world is happy that Barack Obama is gone. As a standup comic, he is a hard act to follow.”

This “hard act to follow” sentiment was in heavy rotation on TV “news.” When Wilmore was mentioned, it was only to note he’d been crushed. On Today, NBC business correspondent Olivia Sterns said “It was phenomenal. I thought he was a lot funnier than Larry Wilmore.” Then Meet the Press host Chuck Todd uncorked the pity: “As usual, the poor comedian gets to come on after the president – is stuck coming on after the president. Poor Larry Wilmore.” 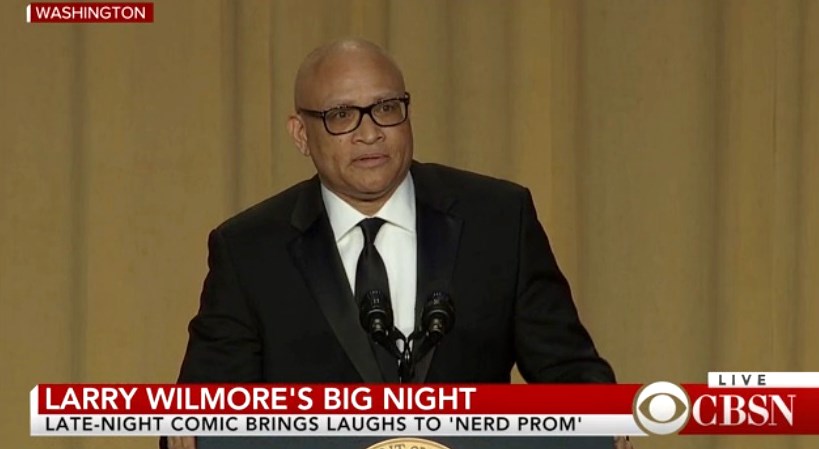 Poor Larry was asked by The Washington Post, “Who was better, you or Obama?” He confessed: “Oh that’s easy — Obama. He killed in the room, and he killed outside of the room. His humor was on point. His slides were funny. He was great.”

After nine incredibly lame jokes referring to Ted Cruz as the “Zodiac Killer” – a leftist Internet meme about a serial killer who murdered people before Cruz was even born  – Wilmore concluded his black-quarterback oration with the salute “Yo, Barry. You did it, my n*gga!”

For his part, Colbert tried to help Wilmore out by saying he bombed because "People in Washington aren't used to seeing two black men speaking at the same event.” But the truth is Colbert became a hero for trashing Bush. This is the same reason the media adored candidate Obama, whose Bush-bashing orations were celebrated as “less a speech than a symphony.” You never become a hero for trashing Obama.

The only part of Wilmore’s routine they liked was the Obama gush at the end. ABC’s Watt honored it as a “serious note on a historic presidency.” To Obama critics, it might recall a 30-year-old George Will metaphor. It was the tinny arf of a lapdog.